Now the second swarm of jungle creepy-crawlies hurtled into the leftmost Zombie regiment, where things began to get messy. Between them the two swarms brought down seven of the zombie pirates, while the undead only managed to kill one tiny spider (a zombie fell on it). The swarms were not just holding their own, they were slowly but surely tearing through the zombies.

Goakitlan managed to rally the fleeing pygmy skirmishers so that they now took up position on the left of the large pygmy braves regiment led by Bontanoan and Chief Atta-Ooga. Off to their right the pygmies riding dwarf-boars attempted to manoeuvre themselves to lend support.

Finally Bontanoan, Goakitlan and the pygmy shaman had some luck with their magic and two of the scurvy dogs were fried by lightning. This success emboldened Bontanoan to take a risk, and he tried to force the spell ‘Bear’s Anger’ to upon himself, but the winds of magic remained unreliable in the presence of the blue skinned enemy commander and he all he did was hurt himself as he fumbled the spell. Goakitlan winced, for he too felt his spawn-brother’s pain.

The salamanders were now close enough to send blasts of liquid fire over several foes and chose this time not to aim at the carronades. They hurt not only the rat swarms in front of them, but also the zombie handgunners and the scurvy dogs. The razortooth rats were spurred into further action by this singeing fire, charging into the pygmy skirmishers on Bontanoan’s army’s right, which made the pygmy shaman amongst them dance with fury. Of course, the blowpipe armed pygmies attempted a countershot against the swarms, but not hardly any noticeable effect (Game note: 34 shots – causing only 2 wounds!)

Grand Admiral Galdabash led his hulks in a charge against Bontanoan and the native braves, with his undead wyvern joining in the charge. Somehow the pygmies and their living god found the nerve to stand against this, although the little warriors fell in droves against such an onslaught, Galdabash tearing their champion in two and splashing his blood all around. Only one hulk fell during this brutal affray, and the braves (failing to live up to their name) fled away in despair, their short legs carrying them just faster than the rotting wyvern. Galdabash also attempted to pursue, but such was the width of his unit that he ended up crashing into the recently rallied skirmishers and Goakitlan (again)! 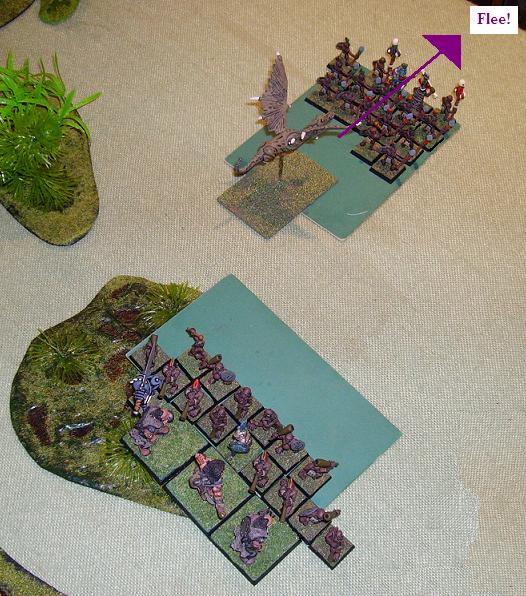 One carronade, fighting fire with fire, finally brought down a salamander, but in the centre of the field Galdabash’s force was not doing well. Once again zombie after zombie was overwhelmed by the jungle swarms, their undead brains entirely unable to contend with the skittering speed of the jungle critters. Yet the swarm of razortooth rats could not emulate the enemy swarms’ success, and found themselves being stomped on and crushed by the pygmies’ nimble feet.

Bontanoan shrieked another of his shockingly high-pitched cries and thus willed his warriors to rally. Closer to the centre the boar riders shuffled about a bit once more, still uncertain of where and how to deliver an attack. As they wondered what it was their living god would want them to do, suddenly Bontanoan himself, still reeling from the after-effects of his miscast and trying to re-cast the same spell, somehow messed it up a second time! The resulting wave of undirected magical force washed through his skin to his heart and liver, then gushed outwards in explosive force to tear all life from his frame.

The living god was … no longer living!

His spawn brother Goakitlan screeched in despair, a sound entirely different to Bontanoan’s rallying cry of moments before. Distracted, he failed to parry a blow from the shambling undead Hulks in front of him and his blood was also spilled – though he was still (for now) alive. When nigh upon a dozen pygmy skirmishers fell to the vampire fleet Admiral’s rage and the might of his hulks, Goakitlan’s wits fled from him. Wounded, bereft of his brother, he joined his skirmishers in flight and when this time they could not escape, he was cut down with them.

Now the pygmy braves found themselves fighting the blue vampire once more, though to be honest they barely noticed, for they were reeling in their attempts to take in the impossible fact that their god had just burst right before them!

The poor braves had no chance at all. They too fled, only to be chased by the crazed Galdabash and his monstrous bodyguards.

The salamanders, not knowing they were being led by a god, returned themselves to the artillery duel and laid low one of the carronades’ crew with fire…

… while more and more zombies collapsed in the fight against the swarms.

The foetid wyvern joined Galdabash (probably unnecessarily) in the fight against the pygmy regiment, while over on the other side of the battlefield the scurvy dogs threw themselves at the skirmishers currently fighting the rats. As both carronades drew yet more blood from the Salamanders (Game Note: Very frustrating – 1 and 2 wounds respectively, from D3 wounds weapons, thus killing neither of the 3 wound creatures!), the pygmy skirmishers proved their worth and by killing enough dogs and rats they so weakened the curse holding the undead together that the remaining foes collapsed too!

At that moment a bloated corpse finally got to the dwarf-boar Riders. Of course, they dispatched the shambling bag of bandages easily, but found out to their cost the danger of doing so. It burst, releasing noisome odours so strong that they killed two pygmies.

… so the pygmy dwarf-boar riders turned to face the other regiment that had come around the flank.

The zombies, however, were still too far away for them to charge, and had stopped moving forwards themselves. Some part of their fragmented minds knew that to get any closer to the boar riders would have been a pointless sacrifice. So they stood, motionless, staring with empty (sometimes quite literally so) eyes at the riders.

The skirmishers on the far right of the pygmies’ line moved towards the centre a little, felling two rotting and rusting handgunners with their blowpipes, while the salamanders advanced and breathed enough fire to kill the remaining two zombie crewmen on the carronade they had targeted before. Only one working carronade now remained. 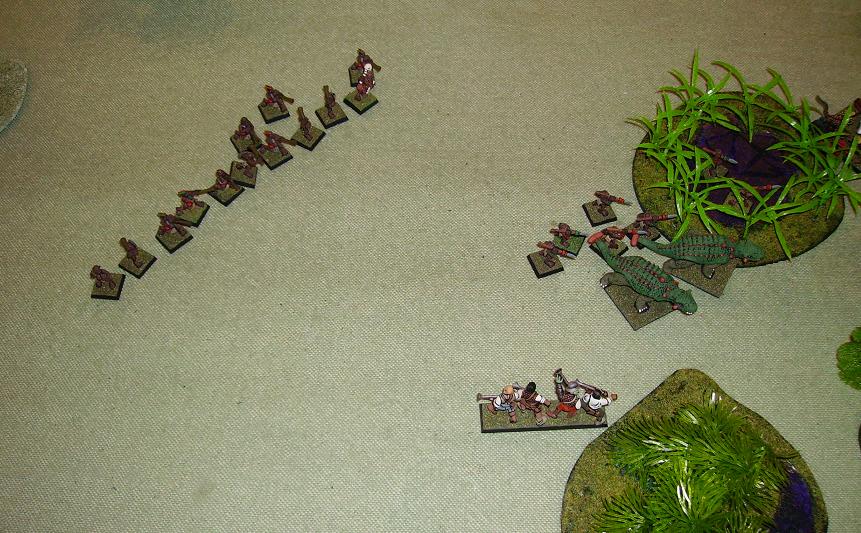 While Galdabash chased off the last of the pygmy braves, the last carronade tried its luck once more. Apparently, it had none left, for it blew up. A split second later a much less spectacular explosion heralded the rather smaller fracturing of the barrel of a zombie handgunner’s piece. Its wielder was also destroyed.

Without Bontanoan or Goakitlan to lead them, the pygmies now began to back off in confusion. Few believed the gods were actually dead, though they could plainly see both had left the vessels they had employed for their earthly manifestation. Whatever the theological truth, the will to fight had gone. They wanted to get away, return to their land, and discover if the third god, Ta-Dino-Po, had also died. If so, then they would have some real worrying to do.

By the time Grand Admiral Galdabash returned to the field the enemy had melted away into the jungle and swamps, and he decided that this meant it was a victory. For the briefest of moments he felt satisfaction, until it occurred to him that he had gained nothing from this battle, but had only been made weaker. He was now less able to fight the pirates on the river.

Yet even if he was weaker, he [u]had[/u] to fight them now. For only by killing them could he replenish his ranks, and begin once more his search for the fabled city of gold.

Game notes:
The story reads like it was a win to Galdabash, but points wise it was actually a draw in the Pygmies’ favour. The game actually ended in turn 5 (at the point marked **), for the reason that nothing would happen in turn 6: there was no-one who could or would charge, no-one who could shoot, and no magic wielders left. The dwarf-boar riding pygmies could advance towards the zombies, but I was never going to charge them in turn 6 as it would have been throwing points away. Interestingly I don’t think I can remember a game where with so much left on the field nothing could happen to change things in the last turn. Not one VP would have changed!

(Oh, except the last zombie handgunner could have died simply to his own misfiring gun, giving + 35 VP to Ant, the other player.)

Yet, and I hope Ant will back me up on this – in terms of the story, it was perhaps more of a win to Galdabash. He still lives, and commands the core of an army. Let’s face it, many of his undead will eventually get up again to fight for him once more! The pygmies, on the other hand, have lost two of their living gods! That has to mean something.

Then again, the pygmies now know what they are dealing with, and Tadinopo still lives to gather the other tribes. Next time they will have ‘Gorrilagors’ and a Stegadon to bolster their fighting strength. Next time they could sweep the foe off the board!

NB: Like with other campaign games using my figures on both sides, I showed both army lists to Ant first, describing them in full, so that he could choose which one he would play. I believe one cannot do fairer than that with such story-influenced (and not remotely tournament style) army lists.