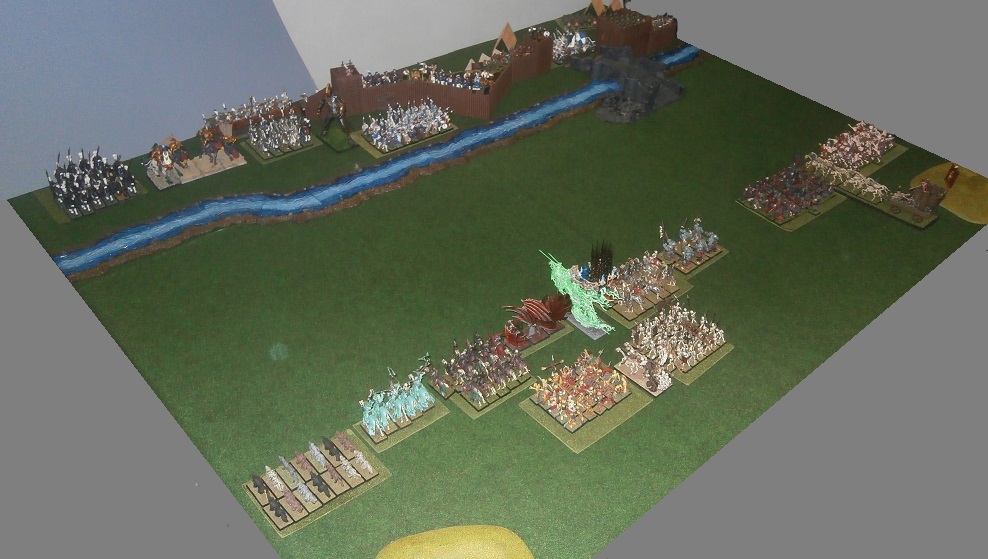 From the front rank of his regiment of Sea Wolves, Lord Alessio surveyed the enemy before him, and realised they obviously intended to swarm the bridge and overcome it with weight of numbers. Two huge mobs of zombies, wearing the ragged remains of Disciplinati di Morr robes (revealing what they once were in life) advanced either side of a huge carroccio, directly towards the bridge. 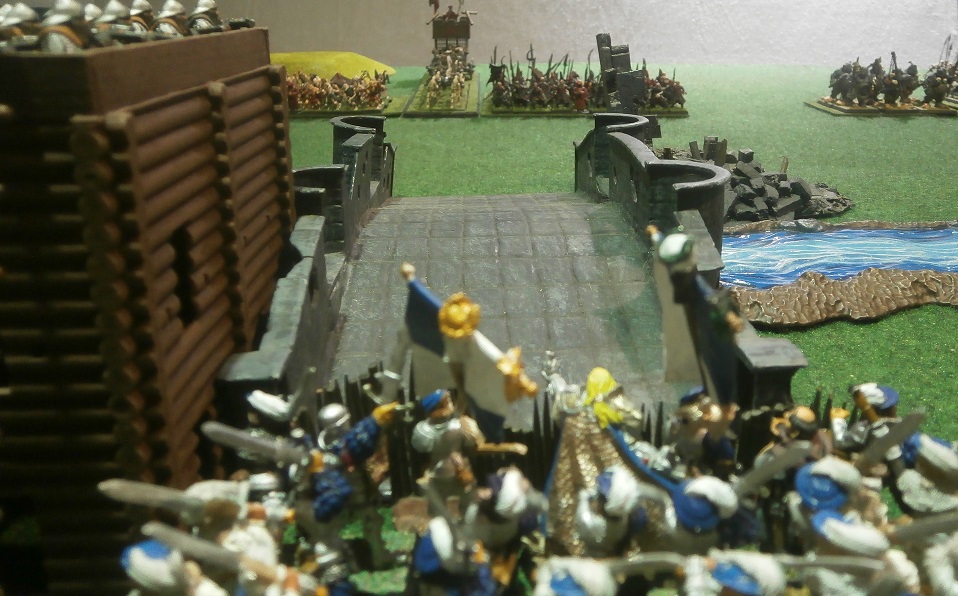 From Lord Black’s position, the enemy looked considerably different, taking the form of bony riders, demonic beasts and the Mortis Engine. He could just make out a woman amongst them, mounted upon a red-barded horse, and realised that she must be the duchess Maria herself.

“Good,” he thought. “Come to me my lady and I will help you complete your interrupted journey to death.”

Not a soldier moved from his allotted place amongst the living. The wizard Hakim, yet to worry about commanding his magnificent contrivance the Colossus, attempted to conjure a protective spell and was unsurprised to find the enemy had enough users of magic to sap the winds and prevent his success. Magical manipulations rarely stopped bolts and bullets, however, and just as Hakim accepted his spell was broken, the artillery began to boom.

The foremost cannon, at the very tip of the bastion, sent an enchanted roundshot deep into the Mortis Engine, but to no apparent effect! [i](Game Note: Miscast, re-roll, hits, but scores 1 to wound!)[/i] The second cannon, its gunner seeing the disappointing effect of the other’s efforts, chose instead to target the skeletal riders out upon the foe’s very far left flank. His shot also hit, but this time with some consequence, for one of the riders shattered into pieces. The gunnr did not know it, but the ball had also severely grazed the vampire captain Bernhardt on its passage.

Berhardt was caught entirely by surprise by this, only hearing the cannon’s report a moment later!

The mortar’s grenade landed very wide of its mark, but the Dwarfen and Reman crossbow regiments did manage to fell a handful of zombies.

This frail assault by the living, albeit only missile and magic, might have been a welcome surprise, perhaps even an encouragement, to many armies. Most of Maria’s soldiers, however, were not burdened with such awareness, nor very much in the way of thoughts at all! As one,and entirely regardless of their fortune so far, her army (and the army of the Church of Nagash) moved on, with the mounted and monstrous companies nearest to Maria quickly outstripping the rest, so much so that the vargheists almost reached the river! 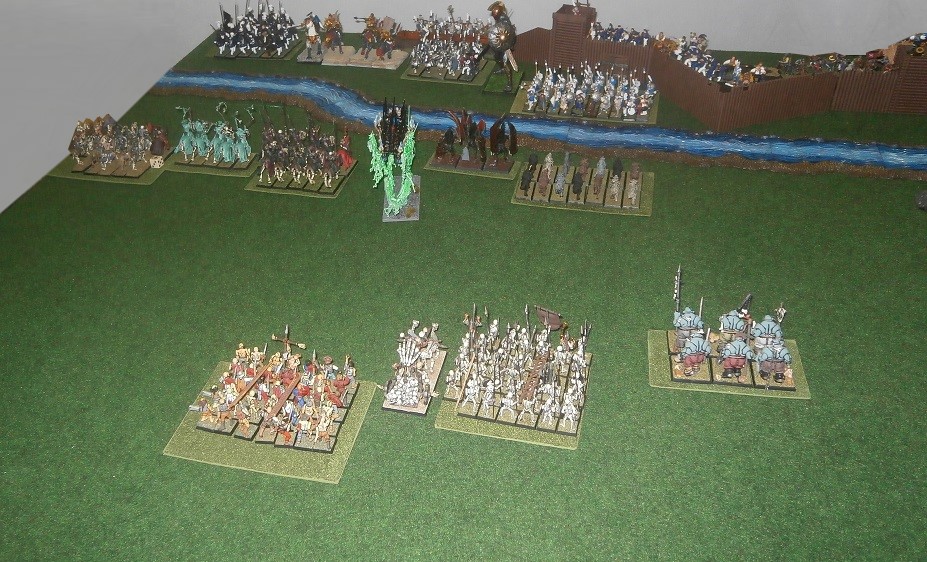 The massed skeletons and zombies in the rear moved as best they could, while hidden amongst them the Necromancer Saffiro now speculated that the battle might well be over before he and the foot soldiers even reached the enemy!

The Army of the Church of Nagash …

… was led by Biagino and drew its magical nourishment from his vampiric will, so it they came on much quicker than Maria’s own footsoldiers, although the largest regiment was slowed by the need to reform its ranks and files all the better to cross the bridge. 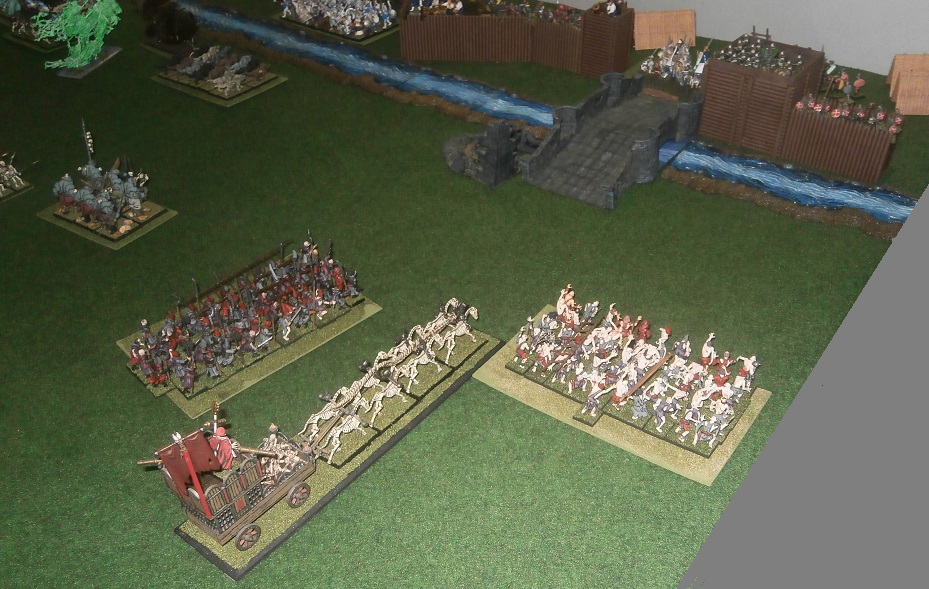 (Game Note: The need to reform was entirely my own fault, for I was supposed to be in command of this NPC army, while David had volunteered to command Maria’s army, and I just plonked two hordes down in deployment without thinking through what they had to do next!)

The vampire duchess threw a magical missile at the demigryphs, but such was their armour that it had no effect upon them. Exasperated at her failure, she turned instead to heal her captain of his wound (and glad he was of it too). Biagino employed what few wisps of the etheric wind were left to conjure Vanhel’s Dance Macabre on his shambling bambinos, hoping to move them all much closer to the foe than any natural motion could achieve, but the spell collapsed as the enemy’s powerful wizard raised up contrary eddies to dissipate its power.

Now the crossbows were re-spanned, the handguns reloaded, the cannons re-shotted, and all just as the undead came within range of every weapon the living could bring to bear. 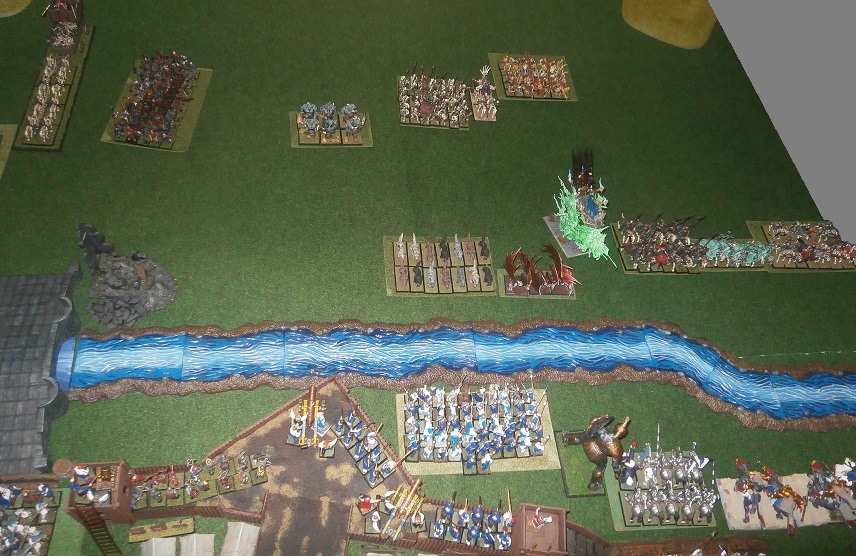 The Colossus had not moved for over an an hour, standing so still that the necromancer Saffiro had (for a moment at least) entertained the thought that it was indeed merely a statue. Until, that is, he sensed the immense power animating it. Now, however, it did move – turning its head to look directly at Maria. 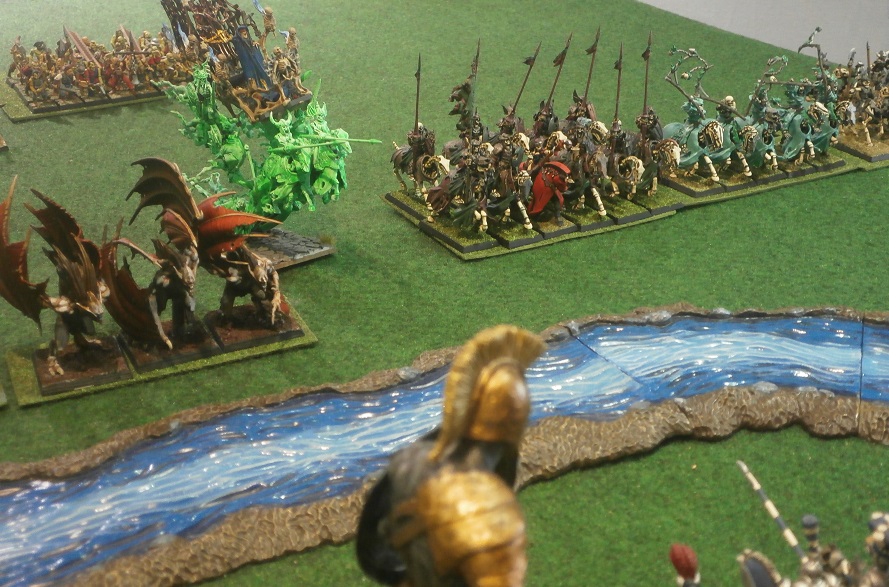 It loomed over her, and yet she felt no fear. 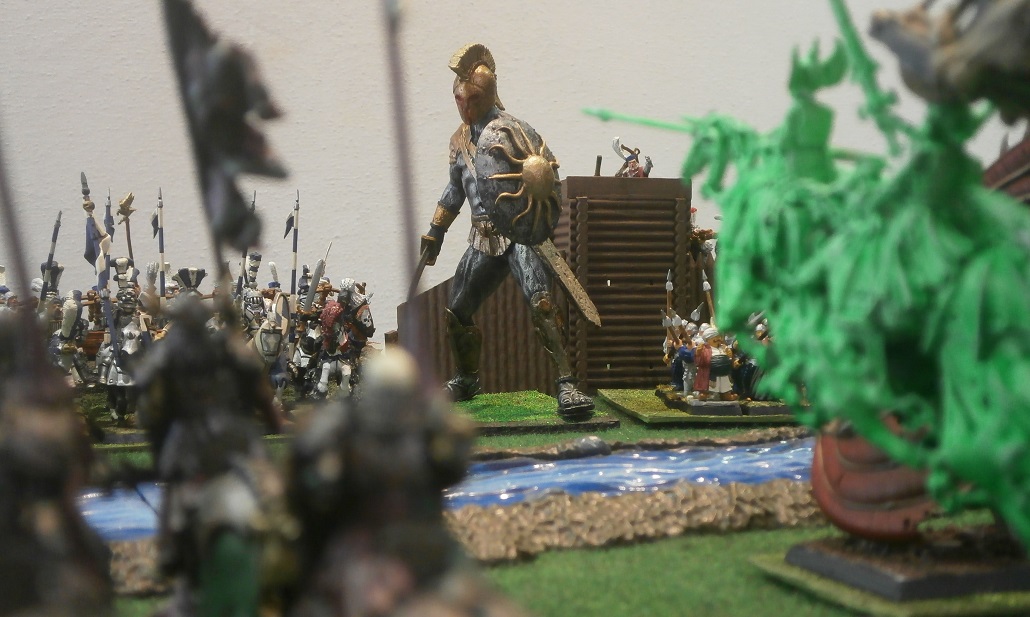 She knew that compared to the demigryph hunting pack, such a thing would be easy to kill. She had the harder undertaking on her mind.

The wizard Hakim made his way to the other flank of the huge regiment of spearmen, all the better to see the most dangerous foes. 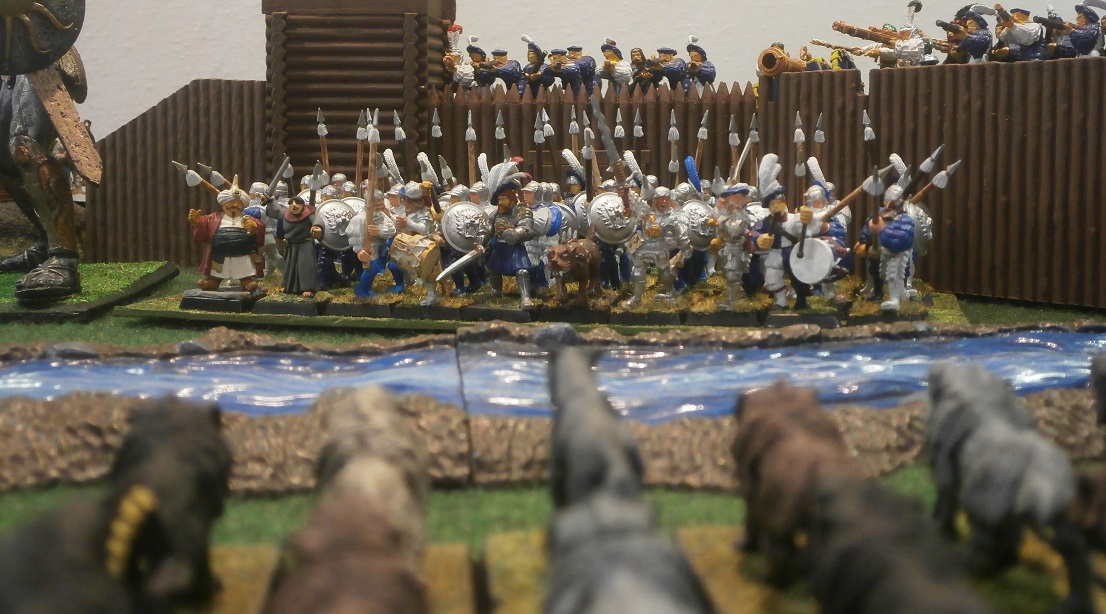 What drew his eyes most was the spectral forms of the Hexwraiths, riding beside Maria’s knights. 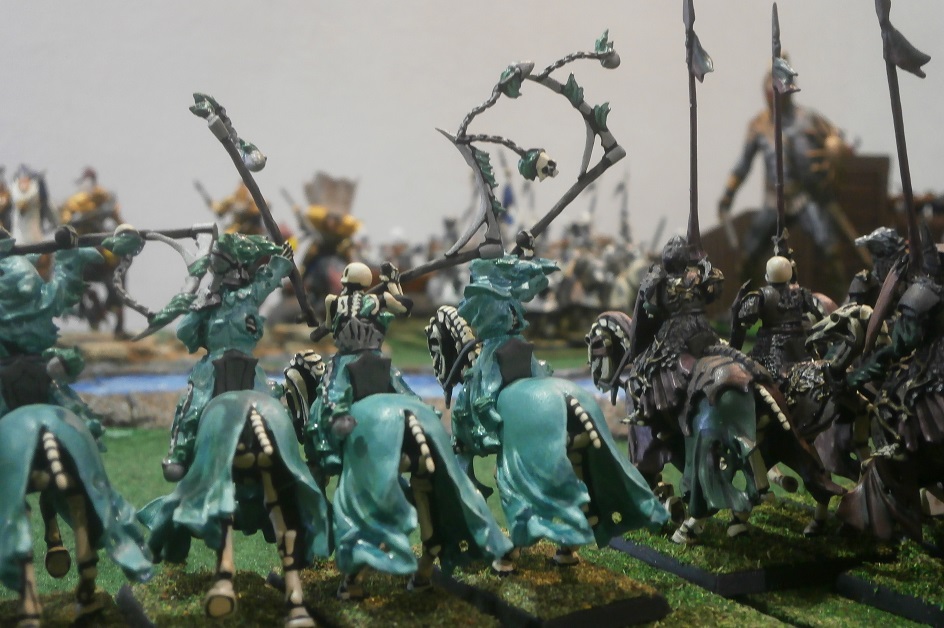 And so he conjured Shem’s Burning Gaze to throw at them. Maria must have been distracted, for her countermagics tumbled chaotically to nought, and four of the ghostly riders where removed from the mortal world entirely. This event was not missed by the marksman Lupo ‘the Wolf’ Lorenzo’s keen eyes, who, having kissed his magical arbalest for good luck, sent not less than three blessed bolts to finish off the last of the wraiths.

When the necromancer Saffiro felt his mistress’s momentary distress, he unrolled his dispel scroll and made sure to stop whatever magic the enemy’s powerful wizard would surely conjure on the back of Maria’s discomfort. (Game Note: Banishment on the vargheists, at 2D6 S4 hits, stopped with a scroll!) Hakim cursed as he felt the spell’s power die, while the Colossus turned its had again to look down upon his master’s intended target. 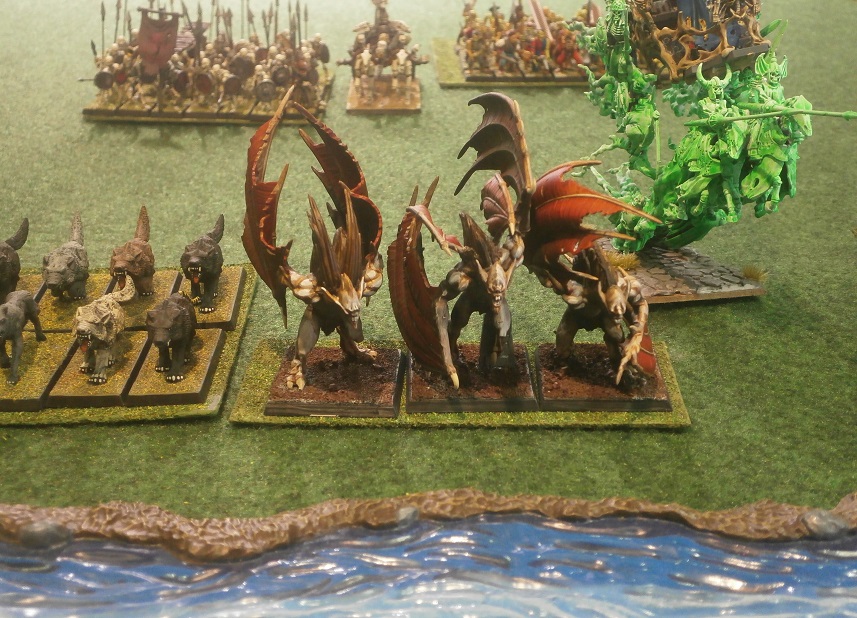 Saffiro had sensed that Hakim intended harm on the vargheists, but then both he and Hakim were surprised (although in somewhat different senses) to see that despite the spell’s failure, two of the winged creatures were felled by the storm of bolts and bullets issued from the handgunners and crossbowmen on the wall behind. Despite the much more massive mob of wolves loping towards them … 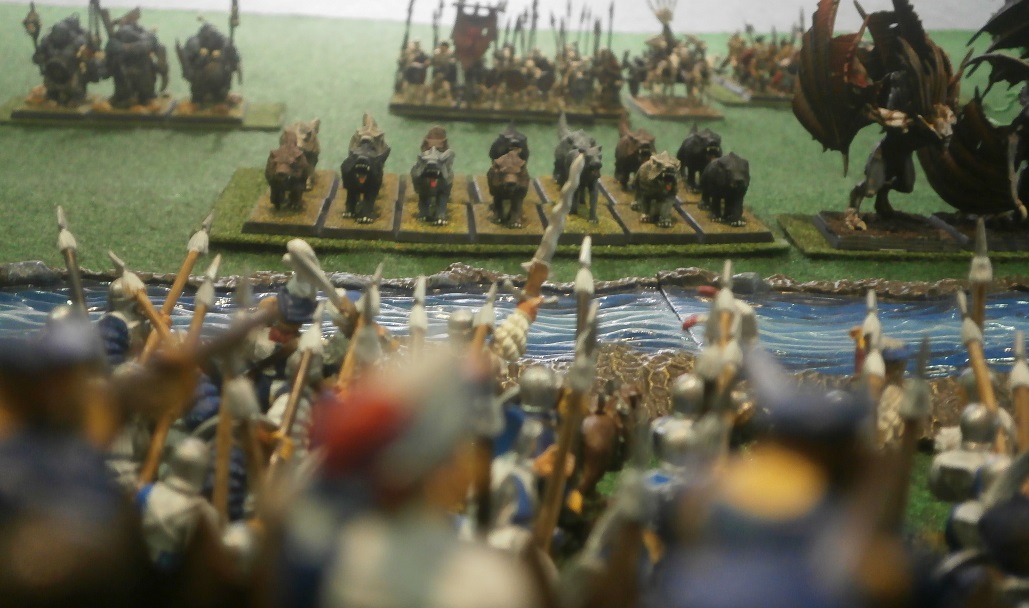 … they too had known where the real danger lay, and thus their shooting.

Out on the far right of the undead lines Biagino’s army of the Church of Nagash had been targeted too. 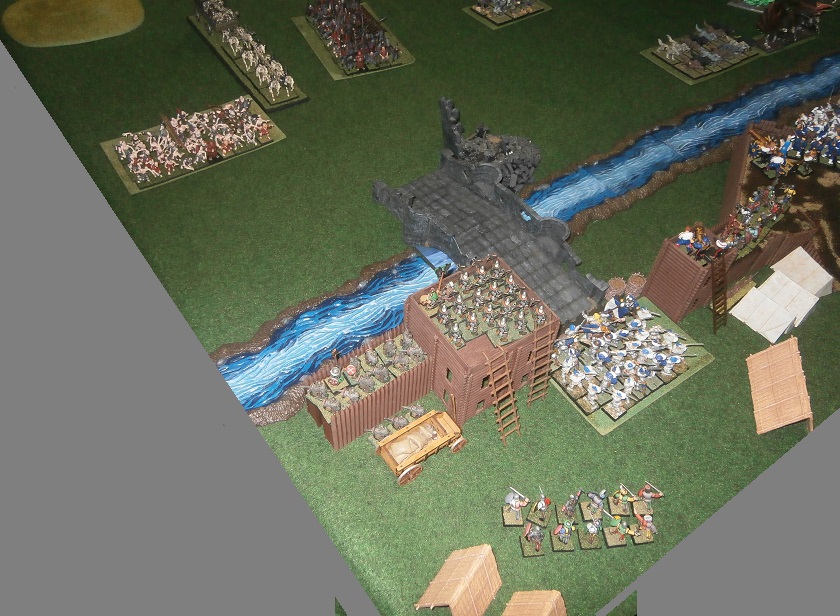 The gunners with the Portomaggorian mortar had high hopes their piece would tear great holes in the enemy’s lines, but these hopes were dashed – as indeed where they – when their engine shivered killing them all! The Reman crossbowmen upon the wall right beside the mortar, however, did not let its explosion distract them, and sent a flurry of bolts sufficiently accurately to slay four of the corpse carroccio’s draught horses. Then moments later the dwarfen crossbowmen took down another three.

Note: The picture shows two, but that’s because I am the fool who based the models in pairs for ‘convenience’!

Game Note: The carroccio’s move was now reduced to 1” due to the special rules we agreed on before the game. Because the model is so big – being 13” long – it’s four pairs of horses were to be classed as one unit and the carroccio itself as another. Any loss of the horses would result in a proportionate loss of its already small movement!

Meanwhile the cannoneers knew exactly what they wanted to hurt – the monstrously large Mortis Engine gliding at the very centre of the enemy force, as if it were its vile, beating heart. 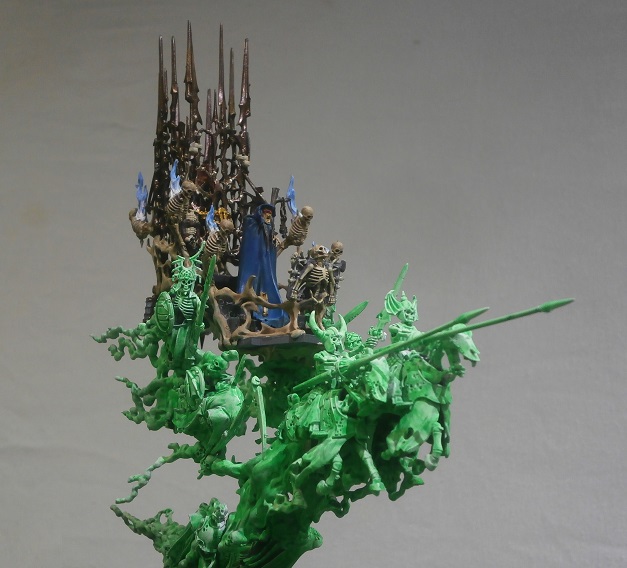 This time the shots were both deep and damaging, plummeting through the entire length of the Mortis Engine with such power that the whole construct collapse in on its wake to be utterly destroyed.

(Game Note: Direct hit by magical, flaming and ignore all wards blessed cannonball, then a roll of 6 for the number of wounds!)

For the briefest moment there was silence, then a radiating wave of lighted energy burst out from the collapsing engine’s core, damaging the Colossus, killing a Myrmidian Knight of the Lady, and amongst Maria’s force, bringing down three dire wolves, one black knight, one skeleton and three zombies. The last of the Vargheists was entirely obliterated by the shockwave!

Perhaps the scale of the first cannon’s success distracted the second cannon’s crew, because they now fumbled their powder and shot, and found themselves having to worm out and reload the piece, which would take considerable time, cursing at their bad luck whilst at the same time, elated to know the Mortis Engine was gone.

As they prepared to deliver their charges, Maria’s army looked a lot less threatening than it had only moments before! 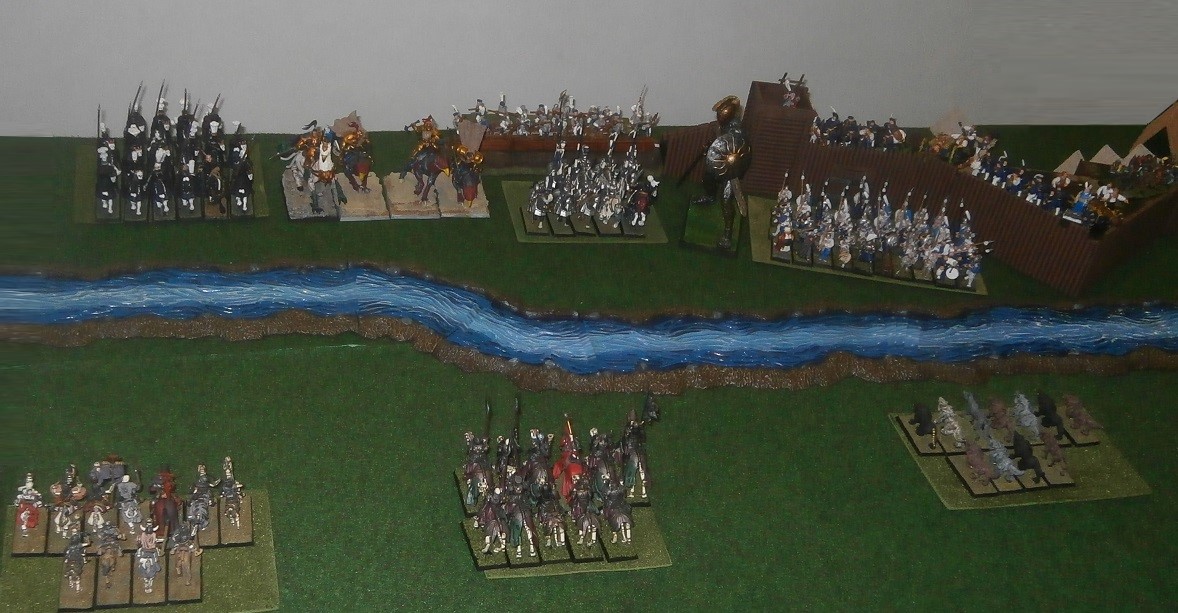