Now that the Compagnia del Sole free company has made an appearance in the Tilea campaign (Part 5, ‘What to do with Caution on a Still Day’) here is a post about painting some of the figures.

The halberdiers and mounted men at arms are Perry Miniatures plastics, the foot men at arms (used as a form of ‘Great Swords’) are either pure Perry or have some GW bits mixed in, as well as some really old GW.

Here are the mounted men at arms unpainted.

I had fun putting these together. Never before in all my years of modelling had I encountered dodgy plastic glue. They kept falling apart on me!

I painted them in the compagnia’s colours, but went with the yellow and white of the Compagnia’s officer’s panache feathers for the lances, to make them ‘sparkle’.

Halberdiers have always been my favourite foot soldiers. I wanted lots of these to be in marching or standing poses, so that I could used them in story-photos more easily. Thus the two poses front and back. I maxed out the marching style.

Here’s an example of a picture of the marching halberdiers from an old campaign post. 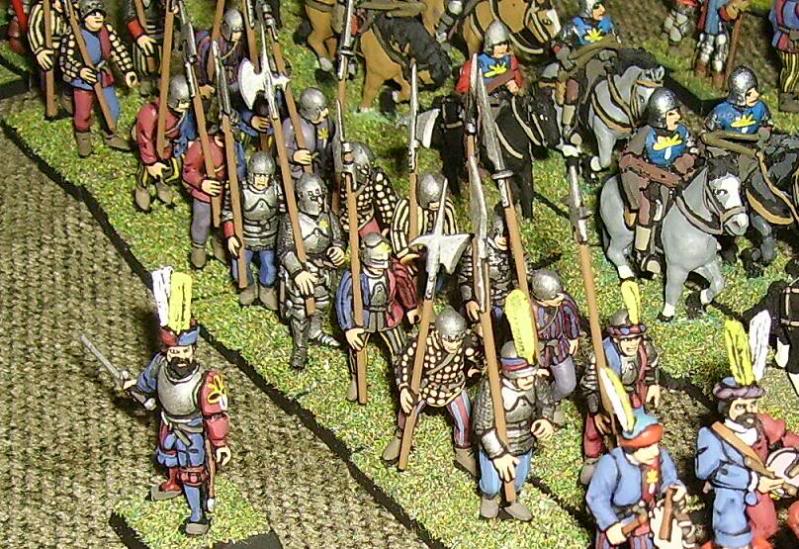 The foot men at arms have grown much since this initial foray. Here is the first form of the regiment, with a real cloth flag (sewn!). There are all sorts of figures here, some repainted figures I’ve had since the 80s (!) including some very old Citadel miniatures which I think Wargames Foundry have re-released.

Here you get an idea how I mixed in some GW weapons &/or arms, simply so that I could have more guys with two-handed swords. I am fond of the sword-on-shoulder posture. Again, great for photos – providing guards standing in the background while the main characters speak.