Second Part of the Battle of the Dunes

Captain Bart, admiral of the fleet and commander of the landing force, stood with his own crewmen. His first mate Lisbeth Boone, one of a number of very tough women amongst the fighting pirates of Tabriz, stood to one side of him pointing out which enemy regiment she reckoned was the strongest; while one of the ship’s younkers, the youngest of the foremast men, blew rather annoyingly upon a horn to the other side. The captain’s standard was carried by an old hand in the front rank, with ostrich feathers added to denote that his was the first company, the general’s regiment, for that was his effective rank was now that he had landed and begun to lead an army upon dry land. 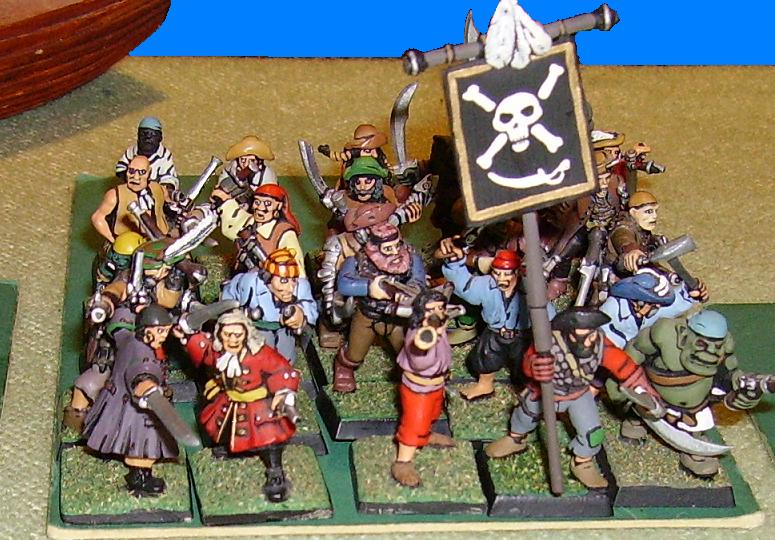 Suddenly an eerie sound, like growling and gurgling combined, lolled across the field from the direction of the foe. It sent a chill down the spine of every living man arrayed there, then turning into a shiver by the sight of movement from the foe. As one, Galdabash’s magically animated force of walking corpses had begun their advance. The fastest were the scurvy dogs who fair-leapt across the field in a very convincing mockery of living hounds. It was obvious they would reach Claudio Sagrada’s dune-top battery, and that only Wilfred Mostert’s company were close enough to attempt to get in their way. Mostert himself desperately glanced about to see if there was anything else he could do, or anyone else who might be able to step in and do what was needed. When he saw the hideous form of the vampire Lord Galdabash himself, leading his fearful undead Ogres, was heading in his direction also, it suddenly did not seem such a bad thing that he and his men might have to fight the snarling dogs. They had to be an easier opponent than a band of towering monsters led by a vampire infamous throughout the southern hemisphere.

Upon the hill, the three large bodies of zombies also moved forwards, shambling through the protective screen of sharpened stakes. Not one of them cared what bullets or balls might plough through their ranks, nor even if a grenado from the foe’s ‘murdering piece’ would tear them apart. When you cannot even recall your own name, it is hard to care about what happens to you.

Although the zombie rank and file might not have been thinking about enemy’s shot, the firing of their own artillery pieces – the two carronades on the slope above the regiments of zombies – had a rather mixed effect. While one tore through Captain Thodrin’s Slayer Dwarfs to kill three of them in one moment, the other blew itself up. Apparently, gun maintenance in Galdabash’s rotting army was not a priority. The gun in question scattered hot, rusty shards of iron from its barrel for many yards around the remains of its now smoking, worm eaten carriage.

Captain Mostert had no real choice. He could not stand and watch while the cannons were destroyed – not when the battle in many ways depended on the effectiveness of those same cannons. With this in mind, he and his men charged at the festering dogs, just managing to intercept them at the foot of the dune.

As Mostert reluctantly led his desperate charge, the rest of the Tabrizian army made its opening moves. On the far left flank the Arabyan swordsmen marched around the stony ground before them, while in the centre Thodrin’s dwarfs took a more direct route towards the hill. Captain del Portes and his own men, experts in swordplay all, picked their way along the bank of the river slipping on the wet stones.

Four booming blasts burst over the battlefield as the pirates three light cannons (Note: c/a DoW or Dwarf cannons) and mortar opened fire. A dramatic moment indeed, ruined only by the fact that not one of them hit their targets – doing little more than scattering dirt up into the air. Sadly, the handgunners (aiming like the cannons at the hulking undead ogres) failed also to do any damage. As a result Galdabash had no idea that the enemy had just targeted his unit. Besides, his attention, like the pirate gunners’ aim, was elsewhere.

Mostert and his lads did not do so badly against the scurvy dogs, hacking enough of them down to weaken the magic binding them together in undeath sufficiently that another two, otherwise untouched by sword or axe, succumbed to the forces of nature and became (simply) dead once more. Mostert even started to think perhaps this day would not be so bad. He was wrong, about as wrong as a man could get, because the very moment he began to enjoy the hack and slash, Galdabash decided he and his ogres would smash into Mostert’s flank.

Annoyingly for Galdabash, due to the sheer size of the monstrous zombies he was leading, he found himself stranded out beyond the main battle. Still, he reckoned he would have plenty of opportunity to kill before the day was out. Out in the centre of the field his three regiments of Zombies seemed to share his enthusiasm to get to grips with the foe, and they raced downhill.

(Game Note: we forgot in turn two that none of these zombies could march, as per the rules of undeath, but by turn three when we realised it was too late to go back. Ah well, honest mistake! If you like, you can assume we had a clever house rule about zombies being quicker when moving downhill.)

Of course, poor Mostert and his crew did not stand a chance against such vicious and powerful foes in their flank. As they began to fall in droves, those still alive thought better of waiting their turn. Within moments the entire regiment, Mostert amongst them, turned and fled pell-mell towards the river. This was an unfortunate choice of direction for they poured through Bartolomeo’s duellists, who were so overwhelmed by the sense of panic that they too joined in the flight. Galdabash himself ran forwards in pursuit and suddenly encountered one of Claudio’s cannons. The Tilean and his gunners, watching the streaming flight of men at the bottom of the dune and then faced with the horrendous visage of the Vampire Lord bearing down upon them, also chose to take to their heels – along with Claudio! No-one knows why, but the second crew chose instead to stand and fight. Perhaps they saw the first of the duellists and Mostert’s crew splashing into the waters of the tidal river mouth and decided they would rather perish to Galdabash’s blade than drown slowly?

Thus it was that the Tabrizian right flank was utterly destroyed and dispersed. The sight of it would surely be thought to make all the rest despair, but instead it made them desperate to achieve what they came here for before the blue-skinned vampire could turn his attention upon them. The entire line surged forwards as fast as they could march, aiming for the hill where Queen Bess sat. The zombies were in their way, but the pirates thought ‘Damn them’ (ironic when one considers the zombies were indeed damned) and rushed on regardless. As they outnumbered the foe in regiments and companies, many reckoned that even if some Tabrizians were stopped by the foe, the rest might still break through.