Fourth (and final) part of the Battle of the Dunes

The Arabyan crossbowmen had not the courage to charge the zombies crossing in front of them, and so allowed the enemy to approach dangerously close to the mortar. The Agha’s sworsdmen, however, proved less timorous than their crossbow armed detachment, and continued their advance on the hilltop directly in the face of a cannon muzzle and its undead crew.

Perhaps a little unnerved by what was surely about to happen, the mortar crew failed to hit the Queen Bess a second time, and instead landed their grenado on the tower upon the other side of the stockade. Thodrin and his dwarf slayers could not believe how simple it was to hack the Grand Admiral Galdabash’s servants down, and before they had really begun to break a sweat the last of the zombies before them succumbed to their blades and pistols, as well as the ever-weakening magic holding them together in undeath. Just as the dwarfs were thinking how easy the fighting was, the brave crew of the mortar found themselves facing a threat that they could surely not withstand – the three of them, one a boy armed with only a bucket and another a crippled man with a crutch in his left hand, were now charged by an entire regiment of shambling zombies. Other much larger bodies of men had fled from just such a foe, and yet here these three found the courage to stand and fight! (I could not tell you why.)

The rest of Galdabash’s forces attempted to close with the few enemies remaining on the field of battle: the hulks made their way towards the centre of the field; the dogs continued their rush to reach the Arabyan swordsmen (though their pace had now slackened somewhat because Galdabash had moved away from them and his power to urge them on had diminished proportionately). The vampire lord had in fact moved away from his undead ogres to make his own way across the field, so filled with rage he no longer sought the safety of numbers and desired only to close with the enemy quickly and personally, to sate the blood-lust that all his kind shared.

The carronade upon the hill fired directly into the swordsmen advancing straight towards it and brought two down, but the zombie handgunners behind and above them failed in their own attempts so dramatically that one of the misfiring handguns felled the zombie carrying it.

Two of the mortar crew were torn apart by the zombies, and the last (the boy who due to his short stature had been overlooked by the dim witted unliving seamen) fled screaming away from them only to drown moments in the sea. This left only one artillery piece on the field – the cannon on the Tabrizians’ far left, whose crew gave thanks to Manaan that they had been spared so far and now offered the promise of sacrifices and prayers if he would continue his protection.

The Arabyan swordsmen, unwilling to receive another carronade shot, now launched their charge at the little gun and its crew, even though their attack took them uphill and over quite a distance and thus might prove a dangerously long run. Their luck held, however, and they reached the little artillery piece before it could be reloaded.

The two zombies crewing it unsurprisingly proved little challenge for the corsairs’ deadly scimitars and they soon leapt over their now dead (rather than undead) corpses to begin their dash for the hilltop. Once again whatever desert gods they looked to for good fortune smiled upon them and they managed to get right up to the stockade and charge into the zombie handgunners defending it. 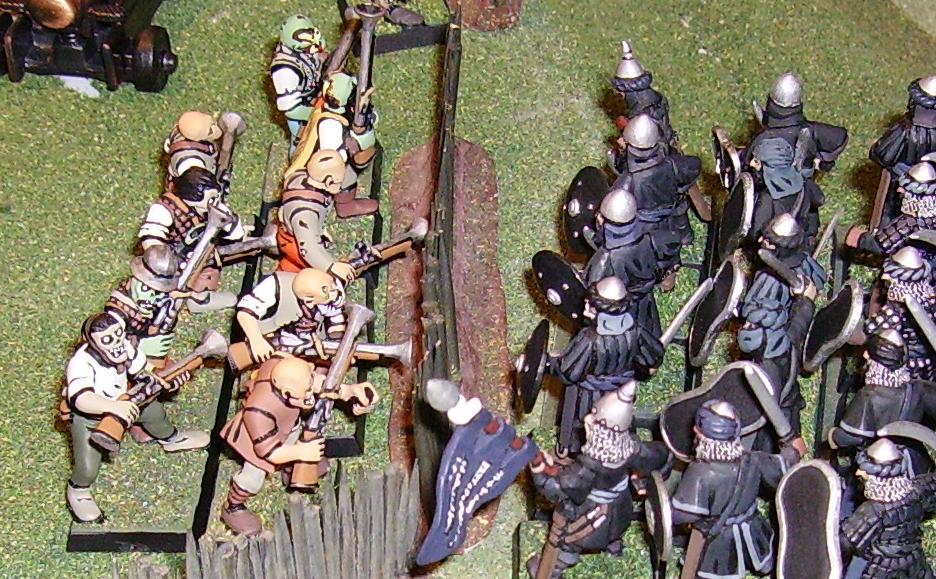 Thodrin’s dwarfs turned to face the hulking ogres shambling near them, and one or two looked up to watch the flight of the last cannon’s ball as it curled through air towards the Queen Bess. The crew’s prayers had been very well received, apparently, for Manaan himself must surely have carried the ball to its target. It smashed right into the great cannon, damaging it badly. (Game note: 2 wounds out of 5, the ball being a D3 wounds, light cannonball.) The Arabyan crossbowmen and last unit of handgunners hoped also to make their own contribution count and shot everything they had into the scurvy dogs (Game note: being lower down all their ranks could shoot). It appeared that Manaan had been too busy carrying the cannon ball for not one bullet or bolt pierced a single dog. Nothing could stop the dogs from reaching the swordsmen now.

Galdabash and one of his regiments of zombies now chased away the last of the Tabizian handgunners (which was all they could reach), while the scurvy dogs hurtled up the hill to do what they had been trying to do for some time now – attack the Swordsmen.

The ensuing fight was bloody, scimitar against tooth, claw against musket butt, yet neither side could gain the advantage and the struggle went on. It was late in the day, and if they could not defeat the undead soon, the swordsmen began to fear the dusk which might well bring all sorts of new terrors to the field. Such fear was not helped by the fact that they were already tiring, nor that they were so isolated up there on the summit. Down below Thodrin attempted to lead his dwarfs in a charge against the ogres, perhaps thinking he might at least keep their attention away from the hill, but his little legs proved too … well … little, and the charge failed to reach the foe before it petered out. All he could do was begin to re-order his warriors ready to try again!

The cannon misfired, but the crew boldly set about reloading with the intent of shooting one last time before fleeing for the relative safety of the ships. On the hilltop the fight went on: dogs rolling down the hill as they were hacked apart and zombies falling where they stood when the curved Arabyan blades cut deep enough. Yet the Arabyans were dismayed to find that the foe’s lack of fear, nor care for their own (un)lives, meant that they fought on regardless and relentless.

It was beginning to look like the Tabrizians would not get to the Queen Bess, and that many men had died and were still yet to die pointlessly that day. But then came the cannon’s last ball, an iron roundshot following exactly the same path as the previously successful one, striking the Queen Bess square on. The huge, ancient and rusty warmachine could not withstand another such blow, and was shattered by the impact – it’s very barrel cracking open as the carriage collapsed. After countless years of service, both for the living and the undead, her majesty’s reign had finally come to an end. Her last surviving crewman simply stood as he had before, yet to realise that his ward was destroyed. Strangely, he was joined in his lack of motion by the three Tabrizian crewmen on the dune. Their gormless stance was due not to ignorance but rather genuine surprise at what they had done. 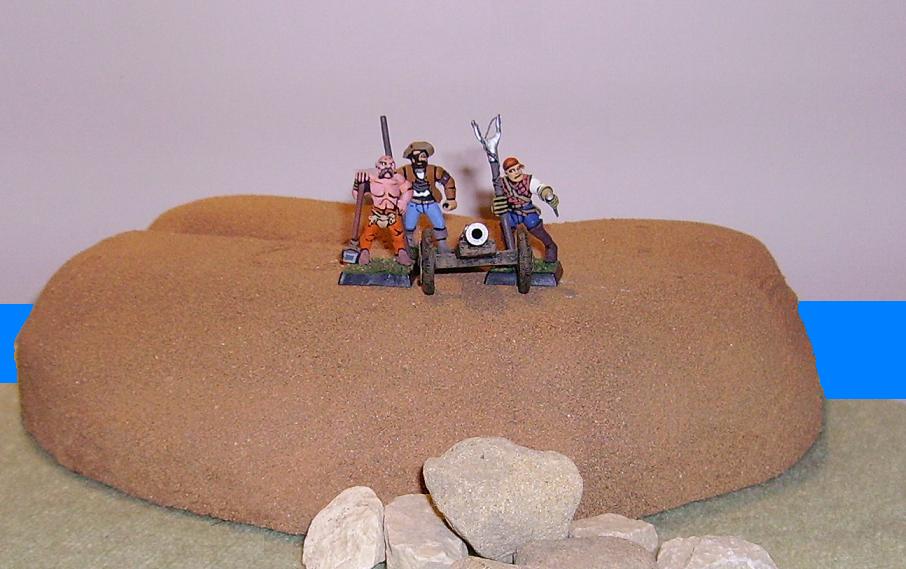 It was almost a full minute before they snapped out of the shock induced by their success, then the gunner turned to his two matrosses and said simply,

They nodded in response, then abandoning their piece on the dune they slid hastily down the sand and bolted for the nearest boat. They were not the only ones to make this decision. Thodrin’s dwarfs saw no use in fighting on when the Queen Bess was destroyed and they too made dash for the beach. Theirs was a more orderly affair than the other Tabrizians around them, almost as if daring the foe to try to follow them. The Arabyan swordsmen on the hill also knew that to linger was not only dangerous but utterly futile, and they began their own frantic run all the way to the surf, dropping shields and casting off helmets so they might run a little bit quicker.

Not one undead pirate pursued them, for their master did not will them to do so. He cared not which man or dwarf escaped this beach, for his mind was filled with another concern: If the Queen Bess was destroyed, how could he prevent the Tabrizian fleet from ascending the river? Almost all his own ships had been destroyed in a recent storm, and although this had not troubled him particularly – a mere distraction while his servants searched for the city of gold – it now became a problem. His smaller boats and wherries had been safe upriver during the storm, and so survived, but they were not here either, being much farther upriver engaged upon the search for the city. All of which meant he had nothing here at the river mouth to prevent the Tabrizians’ river ascent.

A shimmer of heat haze obscured his blue-skinned body, yet every man, orc and dwarf aboard the Tabrizian ships somehow knew he was there and that his attention was upon them. The fury in his glare, the intensity of his anger not only stirred up the haze about him but poured out across the water to wash up against the ships – a palpable force of wicked intent which sent a chill up every spine. A thought now crossed every one of their minds: Grand Admiral Galdabash had not finished with them yet.