Part One: Deployment and Vanguard Moves

Once more Viadaza was to be the site of bloody conflict.

In Autumn 2401 the dead had risen to tear their way through the streets until there were none alive in the entire city. In Summer 2402 Arch-Lector Calictus II’s grand army had broken through the walls to retake the city from the living dead, forcing the vampire Lord Adolfo to flee. In the Spring of 2403 the city yet again fell to the undead, this time almost without a fight, and although plenty of blood was shed, belonging to many of the foolish souls remaining in the city, this time a number were spared so that they might serve the cruel church of Nagash through their enforced, tormented prayers.

Now, in the summer of 2403, an army the like of which had never before been seen in Tilea approached to wrest Viadaza from the undead again. The ‘Holiest Army’ they called themselves, consisting almost entirely of religious fanatics, the flagellating dedicants of the Disciplinatic di Morr.

The city’s walls had been repaired since the Summer of 2402. Corpses were burned in huge heaps in the streets in an attempt to ensure they could never be resurrected to serve the vampires again, while the damage to the walls inflicted during the assault had been repaired, and the earthwork bastion, studded with stormpoles, which sat before the gate had, in a spirit of optimism, been cleared away to give easier access so that the city could recover and even thrive once more through trade. Thus it was that the Holiest Army of Morr faced an unbroken wall, studded with towers, with an expanse of open ground, bereft of trees, cottages or cover of any kind.

Not that they needed to conceal themselves as they approached, for the enemy had no artillery to employ against them, nor handguns or even bows. The duchess’ second-in-command, the bestial vampire Lord Adolfo, his magically re-vivified blood tainted by an orcen tinge, watched the approaching army from the southern-most tower, his ghouls occupying the walls and towers around him. This was the same stretch of wall he had attempted to defend during the last assault. Perhaps he had chosen to put himself there deliberately, to test himself and prove he was capable of doing that which he failed to do previously?

The other walls and towers were held by the vampire duchess’s graveguard, while a large horde of fly-ridden zombies staggered before the gate, and a regiment of skeletal warriors marched outside the northern wall. Inside the city were a body of black knights and a spirit host, both of which were capable of moving through the stone walls to attack the foe.

(Game Note: See appendix below for a diagram of the wall sections and a brief discussion of the siege/assault rules.)

The Holiest Army had built a great wooden siege tower, in the old style, presuming the enemy was unlikely to have cannon or any kind of war engines to hurl missiles at it. A large body of cultists pushed this towards the tower upon which Lord Adolfo waited, while another regiment of cultists advanced upon the very left flank.

Upon the other side of the tower, towards the centre of the Disciplinati’s line, marched a company of mercenaries with crossbows, then a large regiment of cultists containing both the Praepositus Generalis Father Carradalio and his admonitor, Brother Vincenzo. The soldiers of the Remas city guard occupied the right of the centre, consisting of crossbows, two cannons and a regiment of men-at-arms, the latter containing the disgraced condottieri Captain Vogel and the Urbiman priest of Morr. Beyond these, upon the right flank, was da Leoni’s ‘Cannone Luminoso’, then Carradalio’s bodyguard, then the horde of Urbiman cultists. Upon the extreme right was a company of cultist crossbowmen, behind which trotted Barone Pietro Cybo and his guard of light horsemen (at first unsure as to what their role could be in an assault such as this, but then nervously aware that they might well be fighting that day when they saw the enemy outside the walls).

Behind the army was the baggage train, with yet more lesser clergy and cultists to guard it. Carradalio was very keen to ensure this was kept safe, for if he was to lead his army deep into the enemy’s territory, to strike a blow into the very heart of their realm, then he would need his well-stocked baggage train intact.

Of course, he knew that the casualties his fanatical followers would accrue would be significant, even in victory, and so each subsequent battle would be fought with rapidly decreasing numbers. But those soldiers he had would always need meat and drink. Indeed, the inevitable dwindling of his army’s strength would lend itself to the supplies in the baggage train proving sufficient for his campaign, bolstered (as with all armies) by whatever they could take along the way.

A stench wafted from the city, coming as no surprise to the attacking force, which was made all the more sickly by the still-rotting walking corpses posted directly in front of the gate.

Father Carradalio’s plan was simple. He intended to utilise the fanaticism of his troops – their fearless determination to fight to the very last man – to obtain a foothold upon at least two points along the city’s stone circumvallation, from which to fan out along the parapets, subsequently fighting without the disadvantage of being upon ladders. On the right he intended the dedicants pushing the siege tower … 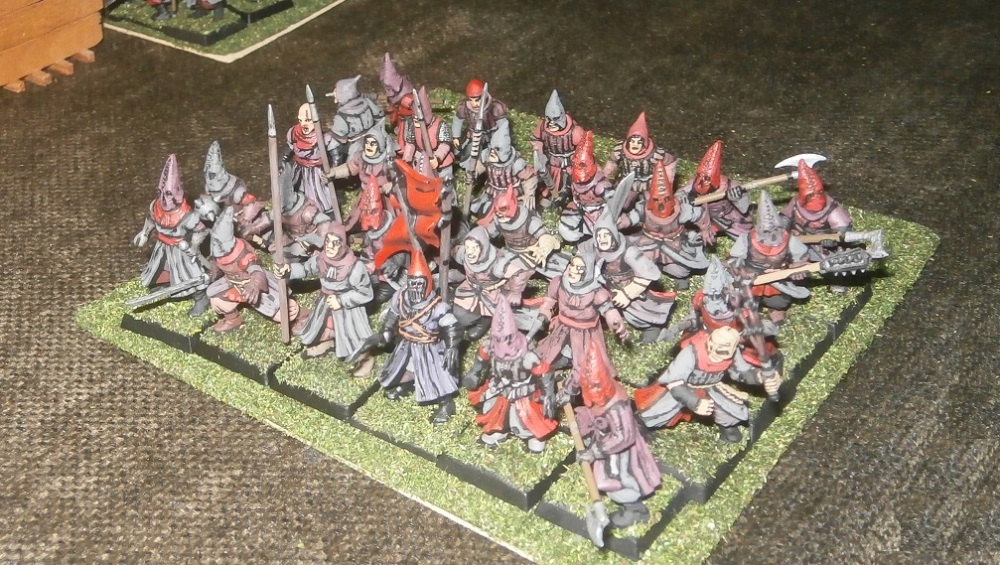 … climbed over the southern wall. That way the ghouls (and Lord Adolfo) would be attacked from two sides, and the casualties caused could be so swiftly delivered that necromantic magic would be unable to resurrect their losses sufficiently quickly.

Whilst that attack was delivered, the cannons …

… would concentrate first upon the gate and then upon a wall, hopefully creating two access points which could be employed if the walls proved too difficult an obstacle, while the massed regiments of cultists …

… and Reman guardsmen would seek to enter at whichever point seemed most amenable to a speedy attack (after dealing with the massed zombies between them and the wall). On the far right of the line, the Urbiman peasant cultists … 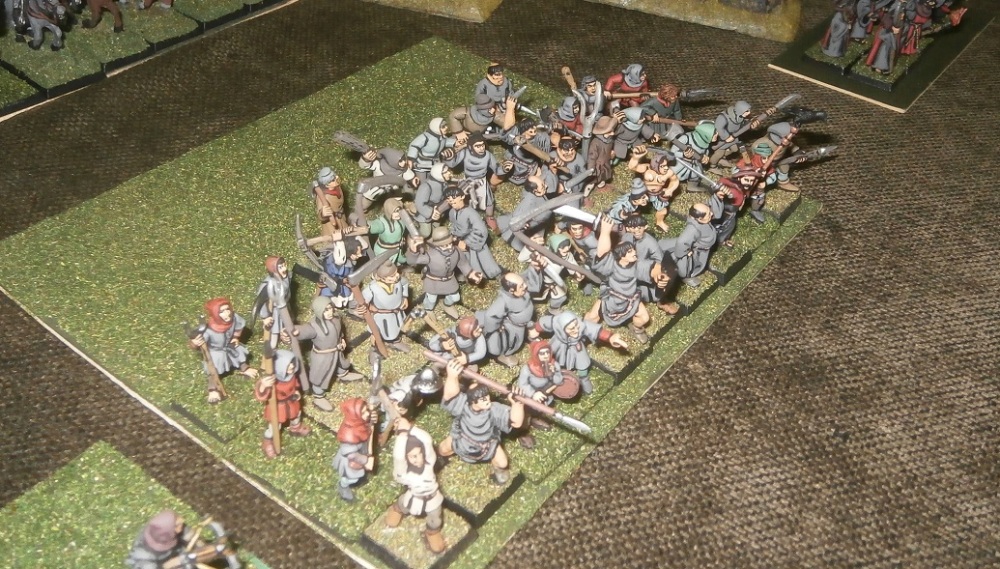 … were ordered to attack the skeletons threatening the army’s flank and then support the other troops as best they could. The army’s significant number of crossbowmen were to concentrate their shooting at the defenders on the walls (able to aim over the heads of the massed troops advancing in front of them) in the hope that even if the casualties they caused were re-raised, the magic efforts required to do so would diminish the number of spells hurled from the walls at the advancing army. In support of the crossbowmen, the war engine was to target anything of significance its crew could spot upon the walls or aim to pierce the multiple ranks of either of the undead regiments outside the walls.

The vampire duchess had plans of her own. Besides manning the walls ([i]Note: see appendix for GM-ruled dispersal of defenders on the walls[/i]) she had boldly placed two regiments outside the walls – the skeletons and zombies – and to support them she had cunningly concealed two ethereal companies – her spirit hosts and black riders – behind the nearby walls so that they could sally out upon her command. 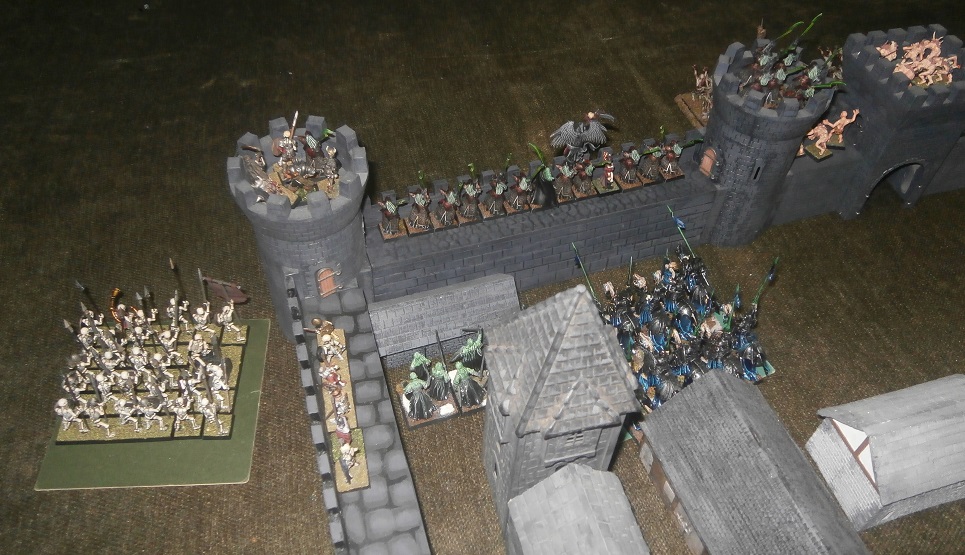 Her own mount awaited her near the knights, held by a skeletal servant, in case she herself decided to sally out with them! To lend necromantic support to nearly all her troops, she had placed herself at the northern end of the walls, Lord Adolfo at the southern end, and her necromancer …

… in a tower between the two of them.

For some time the attackers waited impatiently, as the tower was pushed steadily towards the walls (Game note: As per 6th Ed WFB siege rules, a 2D6 ‘vanguard’ style move) …

… until suddenly there was a blare of horns and thunderous roll of drumming, and the army as a whole began to advance.

A very brief summary of the assault battle rules:

I based the rules on the 6th ed WFB siege appendix, modified for 8th and with some of the 8th ed building assault rules added in to make the end result more compatible with 8th ed.

An assault game lasts 7 not 6 turns, and the aim is to control more wall or tower sections at the end of turn 7 than the opponent. There are lose, draw, minor victory and major victory results, themselves with campaign consequences, and themselves a modified version of our usual campaign rules regarding casualties etc.

I GM’d the sections to consist of the following…

The defender is allowed to split large regiments (30+) into two equal halves, then each half regiment or entire small regiment can occupy up to two neighbouring sections, again splitting in half to do so. Thus 40 ghouls could split then split again to occupy four adjacent sections with 10 ghouls on each. This seems fair enough, even though a break from normal practice ‘in the field’ because at the end of the day the companies on the walls are simply ordered to stand there and fight whatever comes at them.

I never specified on the day, but if a player had raised the question I would have had to say, that little sub-companies of regiments divided this way cannot move away from their adjacent sub-companies, and so cannot start behaving as a truly independent company, unless a character was with them in which case I would have allowed it. The other companies, without characters, would have stayed on the wall they deployed on originally. Characters can move from section to adjacent section, thus moving from sub-company to sub-company one turn at a time.

Walls (but not towers) can be attacked with ladders – with die modifiers much favouring the defenders (eg. defenders +1 to hit, attackers at -1; attackers can only use hand weapons), and extra rules such as that the defenders count as being within the effect of an army standard and can re-roll break tests. More figures fight than in 6th ed – up to 9 attackers per section, up to 12 defenders (provided they have the numbers left to do so). It should be hard to take a castle wall!

Cannons pound the walls using the rules exactly as presented in 6th ed WFB. Once collapsed then walls simply become rocky ground, with the defenders counting as being behind a hard obstacle.

Siege towers are like 6th ed, but with more figures fighting as a modified version of building assault rules from 8th ed.