The brute defenders upon the city walls had watched for the two hours it took to drag the mighty cannon Granite Breaker into position. They themselves had guns, cannon-barrels no less, which they wielded the way a man might a handgun, but they knew that the enemy was too far away for their shots to have any real effect. So they bided their time, unafraid, for why would brutes fear the antics of the little folk?

The attackers – the dwarfs of Karak Borgo, the paladin Baron Garoy and the Bretonnian Brabanzon mercenary company – had arranged their lines before Granite Breaker was hauled up, ready in full force to thwart any attempted sally from the walls to capture or disable her.

The dwarfs themselves stood closest to the great gun, forming the assaulting army’s left wing. Thane Narhak, their commander [i](Game note: A lord level character)[/i], and the army standard bearer led the warriors. To his right were the Longbeards commanded by Thane Thakolim and accompanied by the Runesmith Rakrik Bronzeborn, then next in line were the Trollslayers. On Narhak’s right were the Thunderers, forming the far flank of the army, each of them itching to moved up to within range of the walls.

The other missile troops stood behind the main regiments, as their weapons could shoot much further than the Thunderers’ handguns. A regiment of Quarrellers scrutinised the walls from the rear of the Trollslayers, and behind them was a pair of bolt throwers and another of gunpowder pieces. Granite Breaker rested directly behind Thane Narhak and his warriors, who were bracing themselves for the passage of some very large round-shots over their heads. The flying machine fluttered around the army’s flank, its pilot looking beyond the walls to take the measure of the city’s towers – if he was to fly over the walls and into the streets he would need to give the towers a wide berth, otherwise his machine’s spinning wings would shatter.

On the army’s right were the Brabanzon. Captain Lodar ‘the Wolf’ and his ensign Jean de la Salle led the company’s largest regiment, the spearmen, nearest to the centre of the line, and out to their right were the two large bodies of archers and the smaller company of veteran men-at-arms. Their small gun, which they called ‘the Piece’, like unto a flea compared to the dwarfs’ cannon imperial, had been placed directly in front of the trebuchet all the better to perform its usual role as a guard for the larger engine. 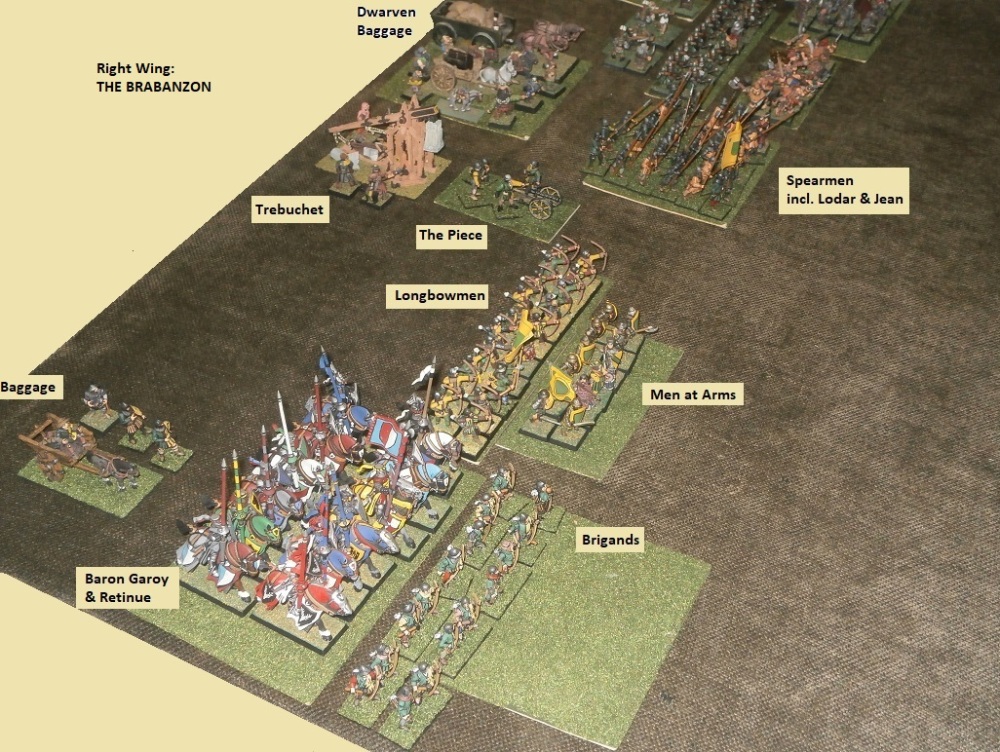 Baron Garoy and his brightly liveried retinue of young knights rode on the far right of the line, to a man wondering what their role in such a fight could be. It seemed to them, despite their hopes, that the enemy had no intention of leaving the walls to sally forth, a reluctance which mirrored their own stubborn reluctance to dismount to fight on foot and climb the ladders.

Considering the fact that Razger Boulderguts had marched the fighting army of Campogrotta out upon his grand raid, the garrison soldiers on the walls were surprisingly numerous, as was the number of leadbelchers amongst them. The southern-most tower was packed with the cannon wielding brutes, as was the next tower to the north, while the wall in between them was guarded by a small body of Ironguts (the latter being part of the city’s standing force). 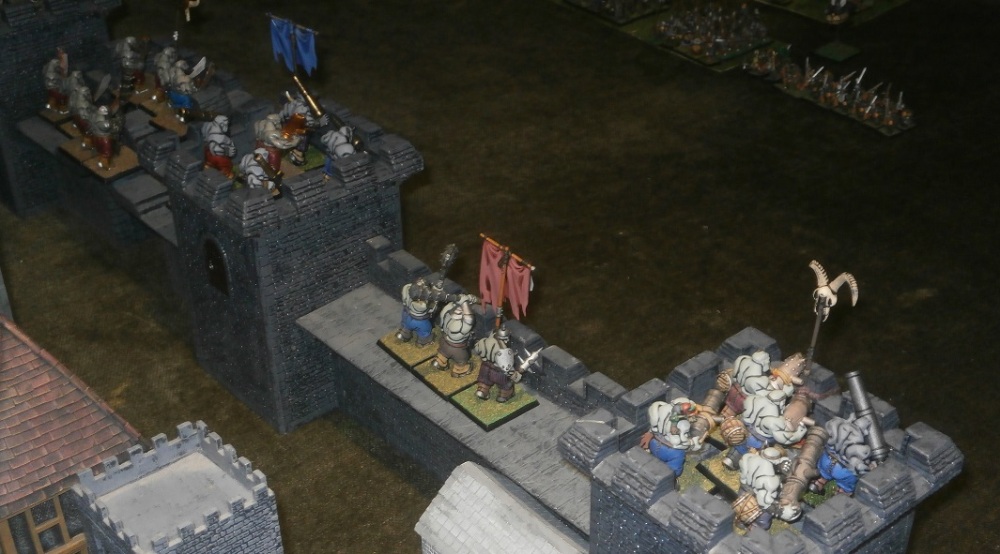 The gate was held by a large company of ogres and a slaughtermaster, while several Maneaters (being the city’s chief ‘constables’) occupied the tower by its side, each sporting a brace of handguns which they could tote like pistols.

The long, northerly stretch of the city’s eastern wall was manned by an even larger company of a dozen ogres, and further half a dozen leadbelchers. 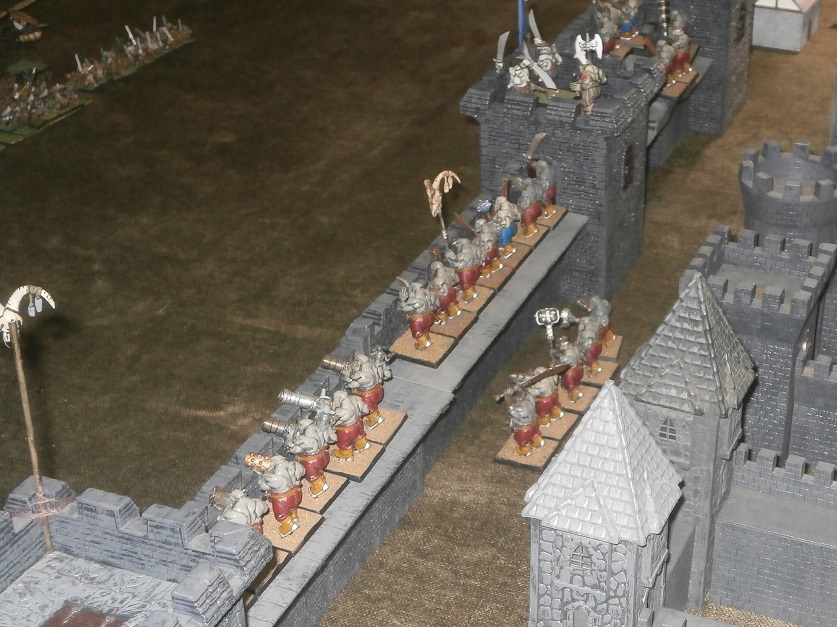 The garrison commander, a Slaughtermaster known as Lord Wurgrut (although the title was an affectation and the rest was only part of the name he professed) had climbed to the very top of the tallest tower in the city’s eastern ward from where he could survey not only the full extent of the eastern walls but also the enemy in its entirety. 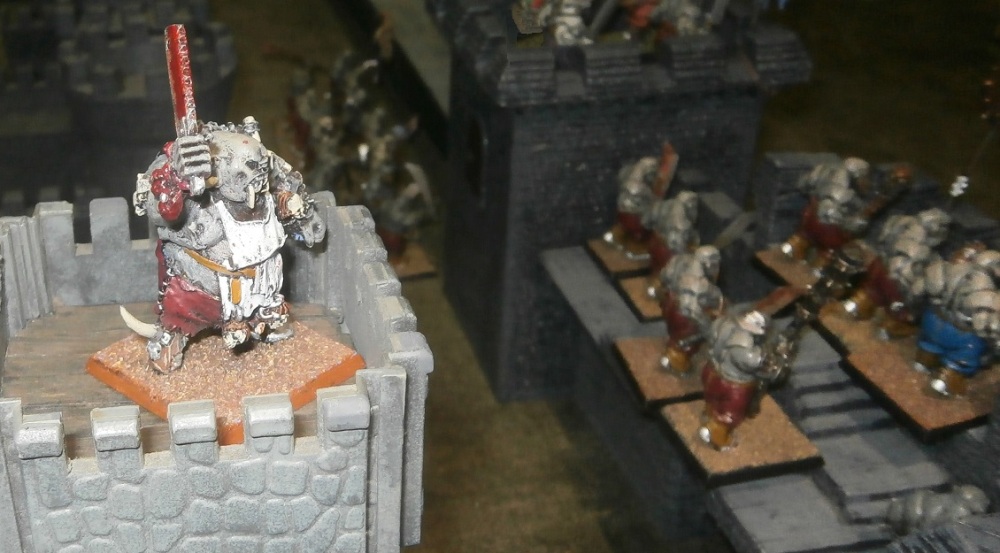 As the dwarfs employed the crane to heft a weighty roundshot to Granite Breaker’s muzzle, where they could then tip it in, the Slaughtermaster Wurgrut looked down on the leadbelchers in the corner tower …

… and the Ironguts on the wall adjacent.

He decided that they were not best placed to serve in the defence of the city. The wall was where the enemy might gain ingress, which was why the Ironguts where there, but the leadbelchers could hold it just as well, and would have just as good a view of the enemy from the wall as from their tower. So he bellowed orders down, sending the Ironguts along the street behind the wall as a reserve ready to defend wherever any pressure might be felt, while the cannon wielders on the tower were to shift themselves over to the wall.

Now at last satisfied with the disposition of the forces at his command, he thought he might start the fight with a bang. Pausing a moment to recall the strange words of the necessary incantation, then allowing the winds of magic to infuse his bulky frame with potency, he called upon a comet to crash from the heavens. For the briefest of moments he gave himself up to elation, for he could see the comet’s bulk in his mind’s eye. Then, as if he had awakened suddenly from a dream, the comet was gone, snatched from reality the very moment it began to manifest by the dwarfen Runemaster, who employed a talisman to break the power of the spell.

Just as Wurgrut began scouring the enemy lines to spy out who might have been responsible for the thwarting of his spell, the enemy began to move. They advanced almost as one, although out on the right the Bretonnian mercenaries struggled to match the naturally slower pace of the dwarfs and came on a little faster. 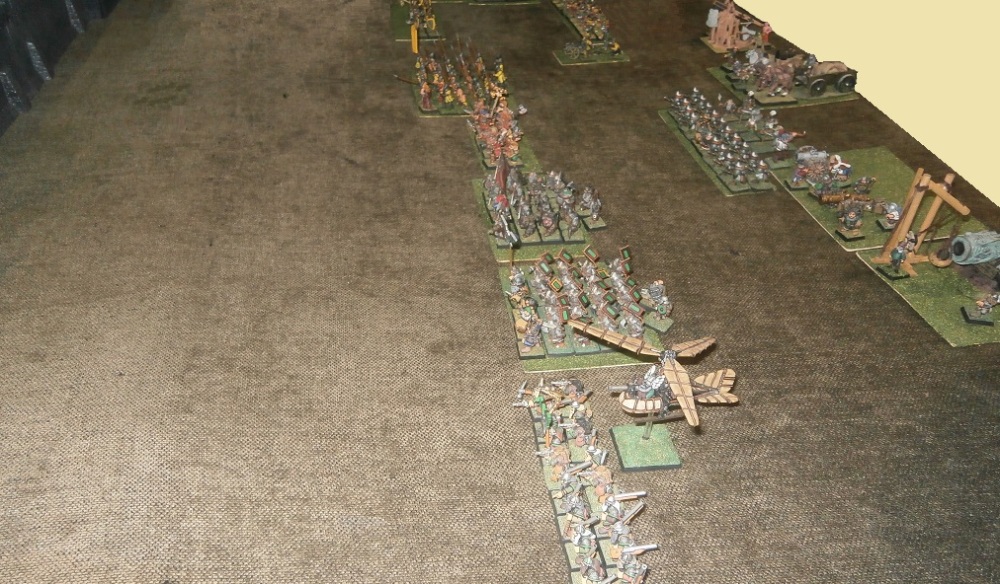 … but the enemy’s second in command, a Slaughtermaster like their general, managed to sap the winds she was employing and her efforts came to nought. The ogre magician could do nothing to prevent the firing of the cannons, however, and all three muzzles were sighted upon the long, northern wall.

The trebuchet crew, whose first shot had merely bounced from the wall, could only look on with envy as all three roundshots smashed into the stone to leave visible cracks and dents. The wall’s defenders, the largest company of bulls in the garrison, peered uncertainly over the crenulations or picked at the cracks that extended up even as far as the parapet and, deciding they would rather defend the fallen ruins than become buried within them, they backed off the wall to take up position behind it.

They were not the only ones scrutinising the damage. Baron Garoy, riding his mighty destrier and clad in his heavy battle armour, his shield bearing the image of a white stag’s head and his helm bearing antlers in his livery of gules and argent, had lifted his visor to get a better look. What he saw gave him hope that he and his knightly retinue might be contributing to the fight a lot sooner than he had thought.

The dwarfen crossbows launched a packet of bolts to sting the Maneaters in the tower by the gate, while the Brabanzo longbowmen’s arrows merely clattered and rattled on the wall being vacated by the bulls. The dwarfen thunderers could contribute nothing to this sharp-tipped hailstorm, however, for they were too busy moving forwards just to get into range of the walls.