… Wurgrut himself went to join the bulls defending the breach nearest to the gate.

Neither slaughtermaster could conjure anything from the winds of magic to trouble the enemy, but a hail of lead-belcher shot finally destroyed the dwarven flying machine, which tumbled down into the street with a crunch.

The brigand archers hurried from the northern wall to occupy the corner tower, thus allowing the Brabanzon’s veteran men at arms to clamber onto the wall using the same ladders …

… while Baron Garoy ordered his knights to turn about and prepare to receive the inevitable charge from the Ironguts hurtling along the street behind.

The damsel Perrette summoned another burning orb to throw at the enemy, slaying two of the bulls massed behind the fallen stones, just as the small Brabanzon gun felled a third. Moments later a huge round-shot from Granite Breaker caused the wall by the gate to collapse, killing another pair of ogres in the fall. The brutes’ dying cries, the foul stench of burning flesh and the sight of bent limbs reaching from the rubble only made the rest of the bulls angrier, more determined to stand their ground.

From the tower’s vantage point, Wurgrut’s lieutenant looked down on the battered bulls below.

He sensed their frustration at simply standing to receive shot after shot, both magical and mundane, being ingloriously whittled away. So he shouted: “Go on then, go!”

This was all it took for the bulls to yield to their inbred desire for a fight, and they scrambled over the rubble to charge into the Brabanzon spearmen.

The fight was quick and nasty. Lodar somehow avoided facing the bulls’ champion, and instead cut deep into the flesh of two other bulls while the spearmen’s sergeant dodged the champion’s powerful blows. Despite her injury, Perrette spun with an elegance learned from a dancing master in her youth to avoid another huge club. Had it hit, it would have crushed her entire body to a pulp. Six spearmen died, half of them perishing from the mere impact of the hulking foes, while only two ogres were slain. The Brabanzon had the weight of numbers, however, and pressed on aggressively, presenting a wall of sharp, jabbing spear tips before them. When the remaining two bulls realised their mistake, they foolishly attempted to return to the defences. They never reached them, and the Brabanzon stepped over their corpses to come right up to the rubble.

Wurgrut summoned magical lightning to fry three of the brigand archers in the northern corner tower, then the arching lines of burning light shifted their fury to the men at arms approaching below, killing another four. Up on the still-standing walls and tower the leadbelchers were re-loading and firing as fast as they could, killing several of the Dwarven Longbeards and Warriors drawing ever closer to the breaches.

Just as the knights had managed to re-order themselves, the Ironguts came smashing into them … 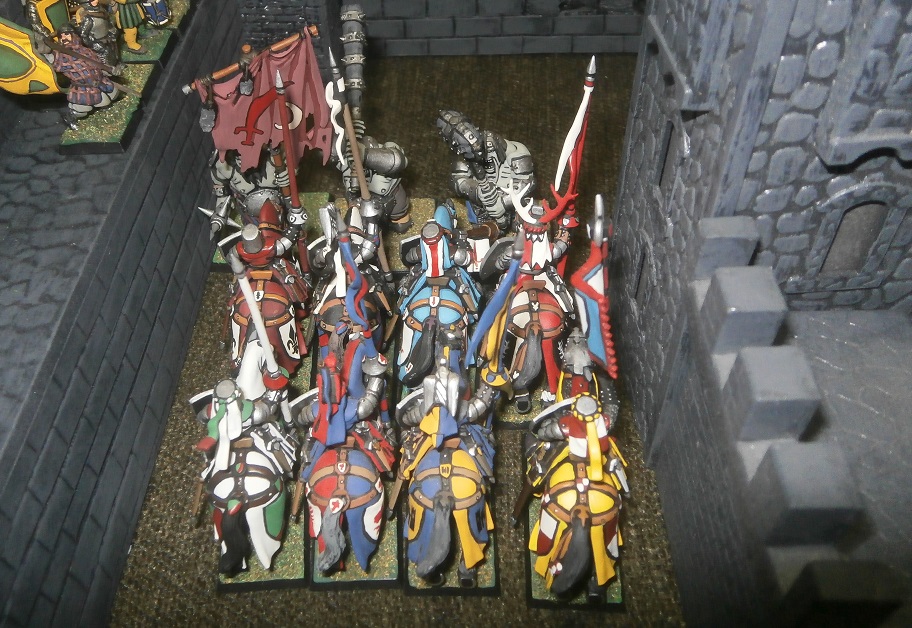 … to begin a bout of hacking and slashing from both sides. Thick skin, metal armour and the protective blessing the knights had prayed for before the battle, all conjoined together to prolong the fight. Here and now Baron Garoy was learning what a real fight was like, and it was a lesson he embraced with open (mailed) arms!

The men at arms upon the nearby wall now attacked the Ironguts’ flank, some striking down from the wall itself, and although they lost two of their number in so doing, their intervention shifted the odds significantly. When one Irongut was cut down, his blood spattering all around, the remaining pair staggered backwards, looking for a way to escape. Baron Garoy laughed as he and his knights spurred their horses on to follow fast, thrusting their lance tips through the enemies’ grey flesh and riding right over the ruins back outside the city!

The most northerly quarter of the city was now overrun, but the ogre garrison was not yet beat. Wurgrut moved into the ruined tower by the similarly ruined gate while the leadbelchers above moved to re-position themselves all the better for the fight yet to come. Wurgrut conjured a powerful blast of wind to blow the men at arms from the wall in the north, but so agitated had he become he lost his hold on the winds of magic and allowed them to dissipate before he could spin them into a new spell. Somewhat dazed, he now watched the dwarven warriors approaching hesitantly (Game Note: Failed charge), while the Longbeards began climbing, in a similarly cautious manner, over the rubble to his left.

Behind him, the Brabanzon spearmen had already entered the city and were making their way along the street running parallel to the wall.

A stone from the trebuchet landed amidst the remains of the last regiment of bulls, killing another of their number, while the rest of the allies’ artillery merely chipped grey stone and bloodied grey flesh here and there. Granite Breaker’s huge ball ploughed deep into the earth, whilst the score of quarrels that clattered all around Wurgrut merely nicked and pricked at his grizzled flesh.

Game Note: This was the end of turn 7, thus the end of the game. According to the siege game rules, based on the relative numbers of wall and tower sections controlled by each side, the result was a draw! Neither a minor victory or victory. This meant that the next campaign turn – which will be turn 1 of the next season, Autumn IC 2403 – the besiegers would still be attacking, and the defenders would still be defending.

Of course, if I just stopped the story at this point it would be a VERY odd ending, as the attackers look very much to have the upper hand. If they simply carried on as they were already doing victory would almost certainly be theirs. But ‘rules is rules’, and my players are playing competitively, which in turn drives the campaign’s story. Both sides knew the victory conditions and had been playing to achieve them. And so I was now left with the need to write an at least vaguely convincing story ending which explained the fact that the attackers had failed to take the city, thus prolonging the siege.

Here is that story ending.

… watching as their Brabanzon comrades made their way down the street below. They could see also that the dwarven Longbeards were clambering across the tumbled-ruins of the wall. 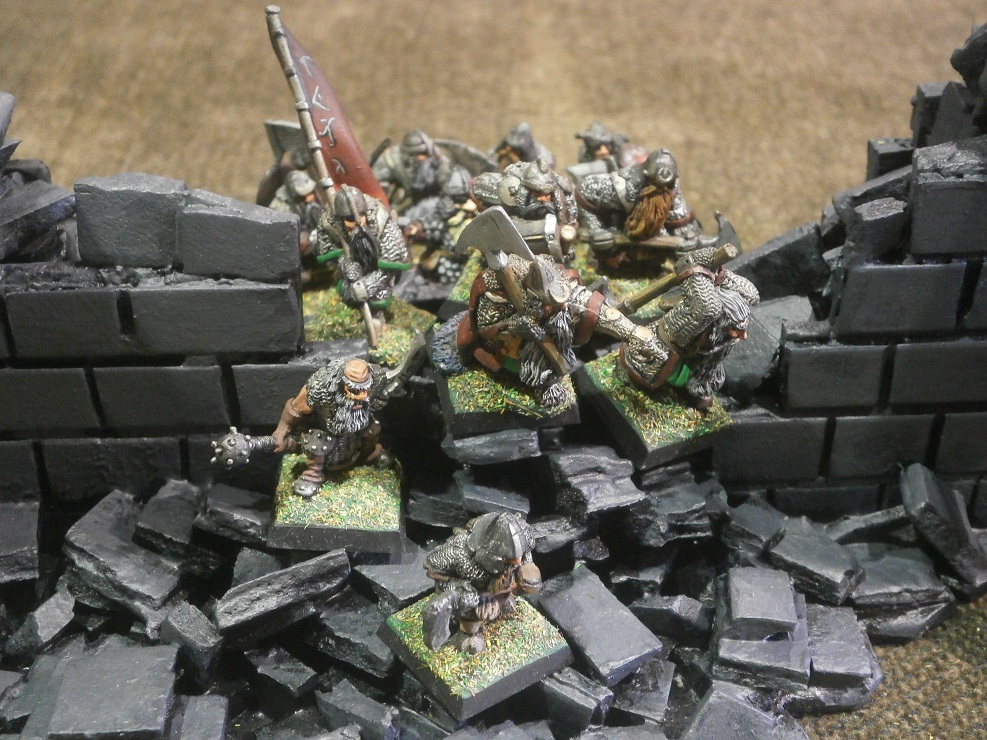 Immediately below them the young baron led his knights back over the ruins a third time to re-enter the city, their mounts bucking and rearing at being forced yet again to traverse such precariously difficult ground. 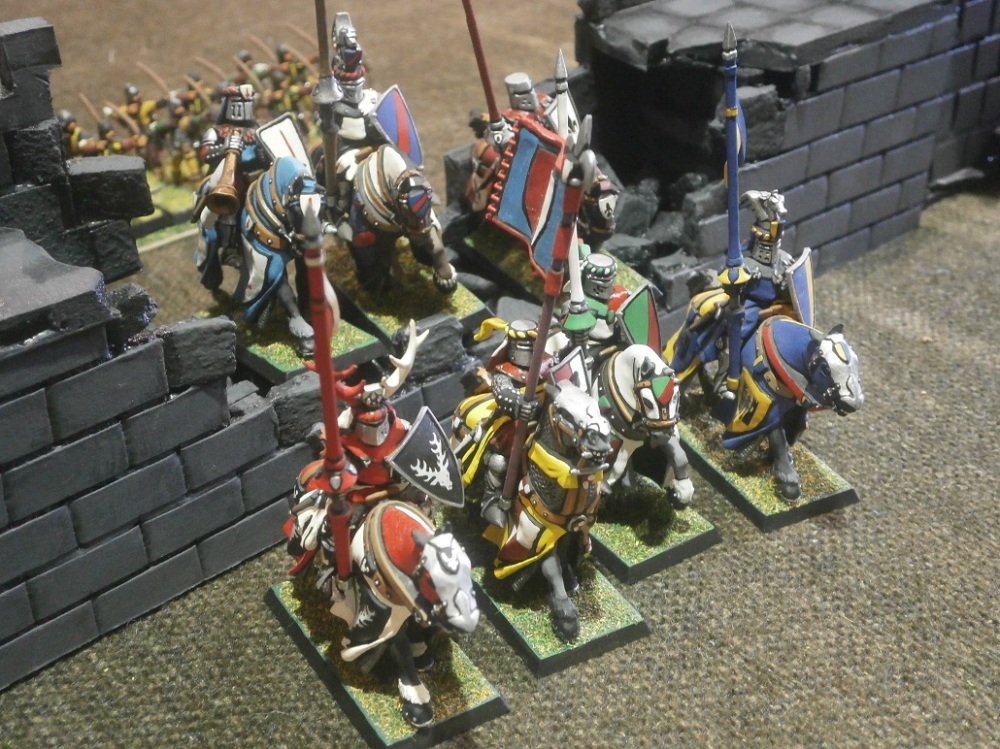 One by one, however, the brigands realised something had changed – the artillery had fallen silent. They turned to look across the field before the walls and could see the guns were still were they had been, with full complements of crewmen. They were not being troubled by attackers. They had ceased firing for some other reason. Perhaps, suggested one of the brigands, they don’t want to harm the soldiers now entering the city? Or, said another, maybe they have run out of powder?

The truth was that the cannon imperial’s chief gunner had commanded a cessation in firing. There had been something about the sound of the last shot and the gun’s bucking, shaking movement in so doing, that concerned him. Something was not quite right, which foreboded ill.

The ancient gun had done good service, and no doubt if she were to continue in like manner, she could take down the last of the city’s eastern defences. But he had not liked what he had seen and heard, and a torrent of thoughts were now tumbling through his mind. He was not at all a superstitious fellow, so his concerns all had a very practical bent: Had the tarnishing of the barrel over the years somehow weakened it – either its bronze fabric or the runic wards protecting it? Was the powder they were using too potent compared to the ancient powder Granite Breaker’s barrel was forged to withstand? Had the journey down the road weakened the carriage dangerously so that the next shot would bring ruin to both the great gun and those who tended her?

He would not risk it, and so had signalled a stop with a crossed sweep of his arms.

Inside the city Perrette and the men she was with suddenly came to a halt.

Before them was a sight that sapped every ounce of will they had to advance any further, and they could clearly see the dwarven Longbeards who had been climbing over the rubble ahead were of a like mind. The last few of the ogre bulls up ahead had fallen back from the wall, moving a little way down a street leading away from the wall. In so doing they had revealed the brutes further on, each and every one clutching a cannon barrel, standing ready to fire. 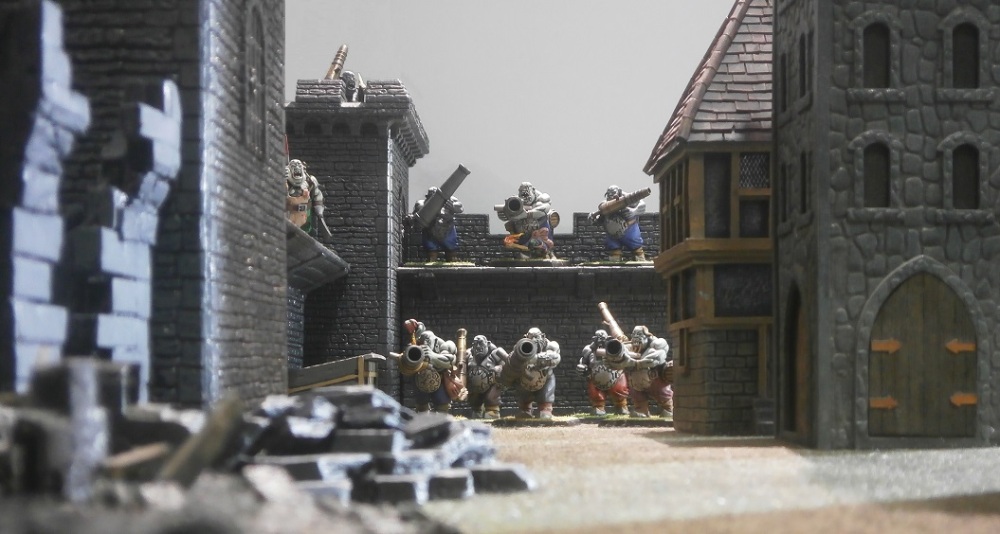 To approach any closer, down such a narrow, stone street, would surely mean certain death. Men and dwarves halted, while the enemy watched and waited. One Longbeard scrabbled back to see why the artillery had ceased its efforts, while the Brabanzon spearmen shouted up to the brigands behind to ask what had happened. Within moments, both men and dwarves realised that there would be no further barrage to blast the walls and towers beside this monstrous battery of barrels.

Perrette studied the enemy through narrowed eyes, knowing she had no more magic in her. Her rage had been transformed into fear, and the loss of blood from her wound was beginning to make her feel faint. The soldier by her side dropped his spear to take a hold of her instead. Up ahead one of the brutes was smiling cruelly. With one hand raised he crooked a finger to beckon them on, while in his mouth he held a smouldering match dangling over his piece’s pan.

“In the morrow,” came a cry from the dwarfs, who began to back away. This was all the Brabanzon needed to make up their mind, and they too left, scrambling as fast as they could over the fallen masonry and between the ragged edges of the torn walls. Before long all the other attackers had left the walls, towers and streets also, to return to the siege lines.

There was to be a lull in the assault, at least until the guns were ready to recommence their brutal barrage. Not one man nor dwarf thought they had lost the battle, for soon, victory would surely be theirs. The city could not escape and its garrison was without a doubt mortally wounded. But it would be a victory without needless slaughter amongst their own. They needed their strength if they were to take the other Campogrottan settlements, to recapture the realm of Ravola for Baron Garoy, and if needs be, to face whatever army Boulderguts brought back with him from his plundering of Tilea. Besides, as the Brabanzon declared by their fires that night, “What use is plunder to a dead man?”

They knew had the right tools for the job. They simply had to wait until the time was right too.