Three of the Grey Seer’s servants were making their hurried way to him. For an otherwise abandoned stretch of tunnel, there was a lot of noise as they progressed, what with the crunching of the gravel beneath their feet, the clattering of the lantern the servant Bolk held aloft to illuminate their passage, and the strained wheezing sound of Gradger’s mask-assisted breathing. All this was amplified by the close stone walls around them, conjoining and reverberating, so that when they did speak they had to shout – or, more accurately, squeal.

“Never look, never read, just carry. That is my task-burden. Not for my eyes, see?” Farrgrin glanced back to indicate that they were being watched even now, for Bolk had more responsibility than merely lugging the lantern. Whether or not Gradger, his vision restricted by the small, thick glass lenses of his mask, noticed the gesture, Farrgrin did not know.

“Has to be important. It is for the lord-master. He will not look upon petty gossip and chatter-drivel.”

“You are asking what you should not be asking,” snapped Farrgrin. “Best be silent, or I might suspect-believe you to be a spy-traitor.”

“Well and good, best for all,” declared Farrgrin, nevertheless tightening his clutch upon the scroll.

They were in one of the lesser tunnels, leading from a little used exit. There were no breeding pits, slave pens, mine entrances or fungus caverns along this stretch, and nor had there ever been. Perhaps it had originally been intended as a sally port, or an emergency escape route? Farrgrin cared not, to him it was simply a satisfactorily secretive option.

Gradger’s mask let out a strained hiss as he took a deep intake of breath, and Farrgrin knew another comment would follow.

“I ask-enquire only because of Josgrach,” he said. “His was important news – the collapse, shoddy work-failings, fools in charge – which angered the lord-master. Rightly so, yes, yes, rightly so. Important news it was and the end of Josgrach. Bearer of bad tidings and killed-dead because of it.”

“But yet what of us, I ask and plead, if this is grave and disturbing news? Are we to be blame-punished for the mere carrying of it?”

Farrgrin picked up the pace a little, and began to outstrip Gradger, running almost beyond the limit if the lantern’s light. 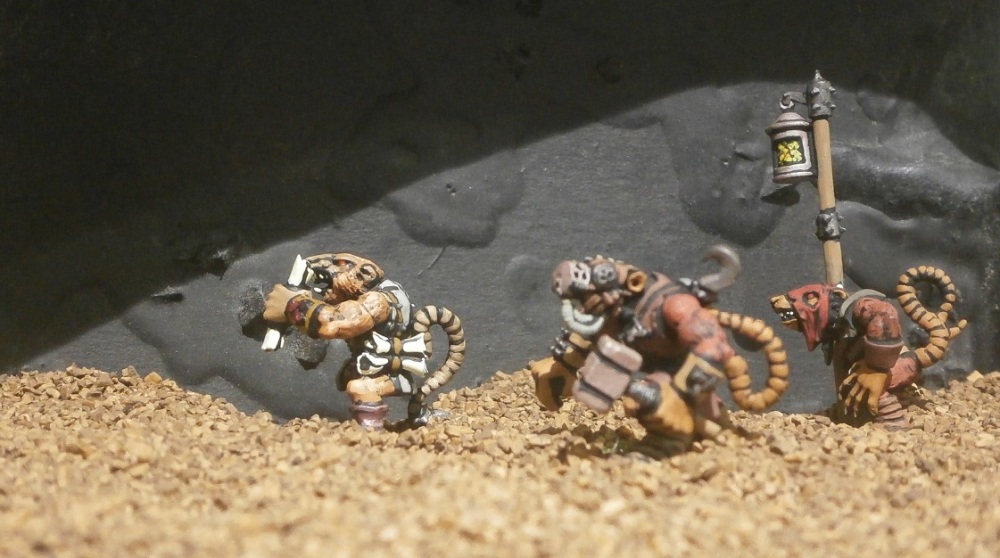 “Listen well, listen hard, understand,” he continued. “Learn from Josgrach’s fate, not fear, but sense. What is important is that we carry this message-letter prompt, quick, secret. So keep up! And shut up! See?”

They were approaching the end of the tunnel, where it met with a well-used passageway close to the Grey Seer’s cavern-chambers.

Gradger allowed himself to drop back further, so that Bolk was between him and Farrgrin. A moment later they rounded the bend to the junction.