Baldassarr had known the meeting would not be pleasant. He had never heard anything good about the ratto uomo, only that they were foul, lice-ridden creatures, with invariably murderous intent. Yet despite the fear and disgust he knew he would most likely experience, he was sufficiently desperate to seek their assistance, for it was indeed murder he had in mind.

Why they had chosen to help him, he did not really know. His accomplice in crime, Naldo, had arranged the meeting, promising that he could trust them. They had apparently assisted Naldo with his own problem, being that of a rival cutpurse who had moved in on his domain. When Baldassar questioned their motive, Naldo had simply answered,

“The enemy of their enemy is their friend.”

“I can’t see why the ratto uomo bear some grievance against the Besutio gang,” said Baldassar.

His friend laughed as if the reason was obvious. “Everyone hated the Besutios!”

Right now, having laid eyes on the creature for the first time, he was having second thoughts on his choice of new ‘friends’. 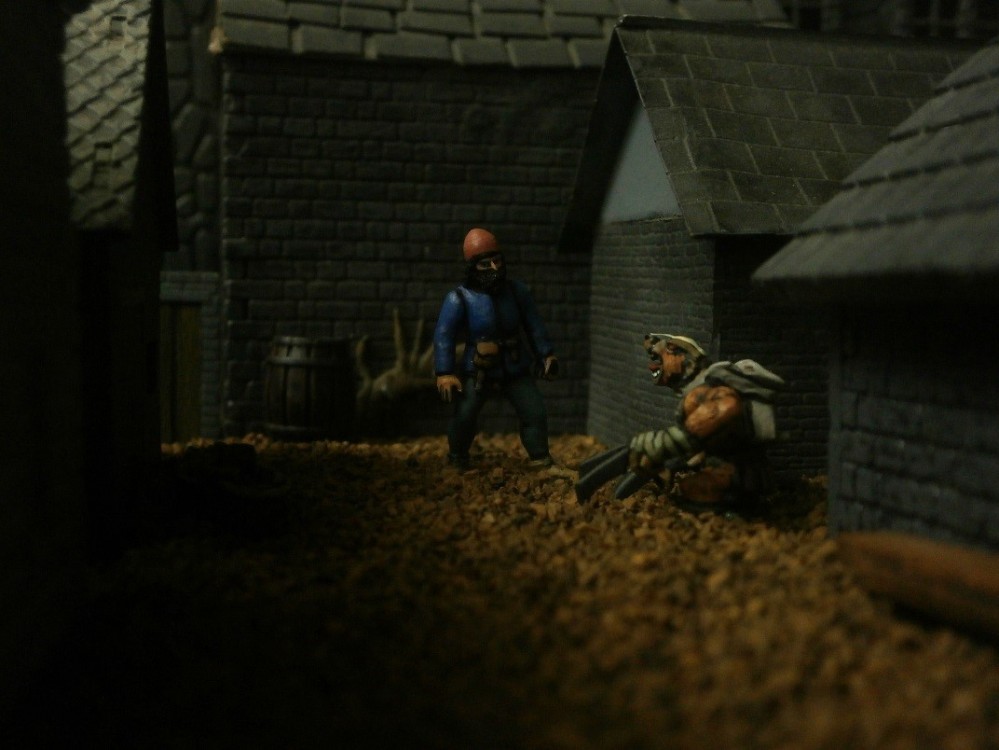 At first glance, the creature seemed to be half his size, but when he considered its squatting, hunched posture, he realised it was most likely at least as heavy as him, if not heavier. Its face was almost exactly like a rat’s, but its body and limbs much more like a man’s, albeit with a horribly large, fleshy tail sprouting from its back and matted fur covering much of the rest. It was clothed in little more than a ragged over-sized hood and had half a ratto uomo skull clamped oddly over the right-side of its long face. What had drawn Baldassar’s attention immediately, however, were the four heavy blades apparently sprouting from its clawed hands.

He could not help but stare at them, and in so doing saw that they were bandaged to the back of the creature’s hands, leaving its fingers free to clutch and unclutch beneath. When the creature spoke he almost jumped with shock, not because of the strangeness of hearing a giant rat speak, or even the lilting timbre of its gravelly voice, but because whatever had intruded so suddenly into his nervous gaze upon the blades would have had the same effect.

“Balda-Baldasssssar?” said the creature, its coarse tongue fluttering in a quiver to hiss every sibilant component of its words. “Friend-accomplice of Naldo, yesss?”

“I am,” he said, unsure whether he should ask for the creature’s name – to do so seemed as preposterous as asking a dog or rat. 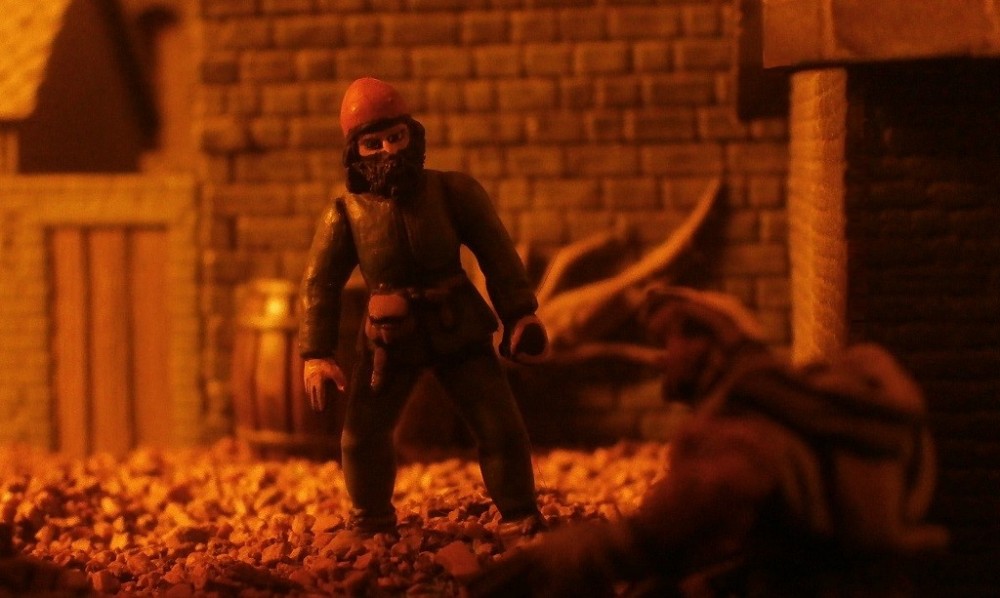 “You are, are you?” came the response as the creature looked him up and down with its red, seemingly pupil-less eyes. “No sharp-ssword? No pissstol? Yes?”

Baldassar felt his throat tighten and stomach knot as he wondered why it was asking him this. Then he remembered Naldo had told him to take nothing but a small knife.

“Only my knife,” he said, tapping the hilt protruding from behind his belt bag and beginning to wonder if he had made more than one very bad decision.

“Always knives, yess of course, always those,” said the creature, whilst its own four blades twitched and scraped, perhaps ensure Baldassar kept them in mind.

“I know Naldo said-spoke this and that. I listened-heard,” said the creature. “You have enemies, nastiness, yess? You want to cow-rule your corner of the nesst? With our aid-help you can-will. Naldo has his choice-pick of purses – no interference, no troublesome worries. Now you too, yess, want rid of trouble?”

Baldassar nodded. “The Scarria Brothers have been taking what is mine. People are paying them not me …”

The creature raised the back of one of its blades to its lips, as if to shush him.

“So ssad. Poor you. You want all the gold, yes?” The creature grinned, revealing its large, horribly sharp teeth. “You want me to slice-cut; chop and chop Sciarra into rot-corpses?”

“You could just scare them,” suggested Baldassar.

“No, not enough. Never enough. I kill-remove, yess? Then they are gone for good.”

“That would work too.”

“Yess. Best for all. You will be happy-glad, and I will feel satisfied in a job well done.”

“What of payment?” asked Baldassar. “What do you want from me in return?”

“Do not worry-concern yourself,” said the creature. “Naldo knows. You become my good friend, and when I need-require, you return the favour, yess?”

Baldassar frowned. “You want me to assassinate someone?”

The creature gave out a sound, part cackle, part giggle, yet wholly horrible to hear.

“No, no. I can always kill, easy, quick. You help, yess? You find, you open, you lure, you reassure. I am happy-willing to do the rest. No blood-mess for you.”

“Who do you want to kill?” asked Baldassar, immediately regretting his question.

“Later, my friend. So many choices to make. Put it from your mind-thoughts. These are things for me to worry about. Yess?”

3 thoughts on “New Friends and no Rest for the Wicked”