Having scrambled, quite unladylike, beneath the clattering, shattering shower of bullets-striking-stone, Perette joined the brigands at the side wall, from where she could still see much of the enemy army, concentrated as it was before the gate tower. She could smell the taint of warpstone: a metallic tang in the corporeal air and the stinging sharpness of the etheric breeze.

The enemy were drawing near – the walls might soon be bristling with their ladders. Of course, she could not help but also notice the sudden appearance of the ratman on the tower-top along from hers, what with his array of brightly coloured banners almost doubling his height!

The new engine’s Brabanzon crewmen, surprised as they definitely were, did not want to lose the chance to shoot successfully at least once, not after all their efforts to master the art, and especially as everything was already prepared. So, despite their understandable discomfort at such a close and dangerous magical manifestation, they continued the process of firing!

As the ratman was obscured by the engine, Perette realised she dare not employ her magical fire against him, for fear of blowing up the gun, which seemed a more than likely outcome, if not guaranteed! It also occurred to her that if he was to descend the stairs instead of attacking the gunners, the ratman could open the gate, allowing the enemy to pour into the city. Looking down into the yard below she saw Baron Garoy and his knights waiting, as planned, mounted and ready to challenge whoever made it over the wall.

The young baron had changed considerably since being wounded at Campogrotta. Not only had he been left somewhat slower and more deliberate in his actions, but his past arrogant aloofness had apparently been knocked right out of him! This much became painfully clear when Perette realised that Garoy had developed a romantic fondness for her, something surely impossible before his wounding? Before Campogrotta, she offended him so much that he could not even bear her presence. Now he was genuinely fond of her, grateful for her help and indeed held her in respect – so much so he had agreed it was best that she commanded all the defences while he commanded solely his band of knights.

Well, thought Perette, he was in the right place at the right time. She waved at him, gestured for him to enter the tower, and drew her hand across her neck to indicate some killing was needed inside. Garoy nodded once, then dismounted along with the rest of the knights to lead them into the gate tower.

(Game Note: We could not allow Garoy and his knights simply to charge the tower and thus join in combat with the skaven warlord, as per the WFB 8th ed. building rules, because of the need to dismount first. Considering troops are not allowed to change formation during a charge it seemed right and proper for me as GM to rule that dismounting from horses was similarly disallowed!)

Now that the baron and his knights had gone from the yard, the Brabanzon horsemen would have to do his intended job instead, so they moved along to best position themselves for the task in hand.

Assured that Garoy was on his way to take on the ratman in the gate tower, Perette spun up a fireball and sent it scorching into the badly mauled red regiment, killing two. Not satisfied, she decided to conjure bolts of fire onto the same, but this time the winds tore through her too strongly and spilled out uncontrollably. Another pair of ratmen died, but much of spell’s strength burst from her own body to wash across the rooftop, killing four of the men standing beside her! She was left reeling, confused and ashamed by her error – this fight was proving very hard upon her despite being atop a stone tower!

(Game Note: Both the Skaven and the brigands passed their Panic tests, the former through luck alone, the latter helped by the fact that they could re-roll their fail. This is another campaign rule for defenders on city or castle walls and towers: they re-roll all failed Ld tests as if the army standard was always within 12”.)

The harmful magic did not badly harm any of the trebuchet crew, but its stinging caress must have at least distracted them, for this time their engine’s hurled rocks landed far wide of the intended mark, damaging only the ground! Meanwhile, the brave gunners on the neighbouring tower, despite the warlord’s presence close by, fired their gun. Its deafening report and impressively large belch of smoke assured them that it must have done well. If they had still been there when the smoke cleared, however, they may have seen that only one of the ratmen in the yellow regiment was killed by their shot!

The brigand archers, despite the horror of the mysterious deaths caused by their beloved lady, finished off the last of the rat ogres staggering in front of the longbowmen’s wall, allowing the latter to loose a volley instead at the severely mauled red regiment, killing three more. Much to everyone’s surprise, friend and foe, this was still not enough to send them running!

Upon the high, thin tower to the right of Perrete’s tower there was a second gun, much lighter than the new contraption, and with only one barrel. The gunner had been waiting until the robed ratmen were in range and now let his linstock down to caress the priming powder with his match. A (loud) moment later he gave a cheer, for he could see four of the enemy had lost their heads! The survivors, now less than half the number who had started the march towards the walls, were untroubled, however, for as Perette had pondered earlier, they were indeed so intent upon killing the enemy in the service of their god that that they cared not a jot for the deaths of their comrades, only that they could get their hands on the foe.

And so it was, now they were close enough to the walls …

… the plague monks began their charge, hefting their huge ladder as they came within a few steps.

Urlak now summoned Crack’s Call, causing a crevice to appear in the ground running from his own foot towards the gate tower. Perette, momentarily distracted by the rush of events, the swirl of considerations and not least the deaths she had caused, did not attempt to prevent this flow of magic. Urlak’s grin grew wider and wider as the crack sped towards the tower, for he knew its power would take it right to the building. Upon touching the wall, a veritable craze of cracks appeared in the stone, coursing like the branches of a tree, upwards and outwards. Inside, Garoy and his knights realised very quickly the building was about to crumble and turned to leave the same way they had come, although much quicker than when they entered. All but one knight got out! On the tower-top, Warlord Urlak also saw the cracks, and without stopping to wonder why (certainly without time to realise the damage had been caused by his master) he escaped by leaping nimbly over the wall to land outside.

There was nothing the crew of the engine could do, however, for they were too high up for men to jump and a flight of stairs away from the walls. Down went the tower, and so too them and their gun!

The new gun had fired but once, and in so doing had killed merely one enemy warrior, while the trebuchet had slaughtered many tens of warriors. Of those not currently far too distracted to notice the event, several ‘lucky’ wagerers now wondered if they would live to collect their winnings. 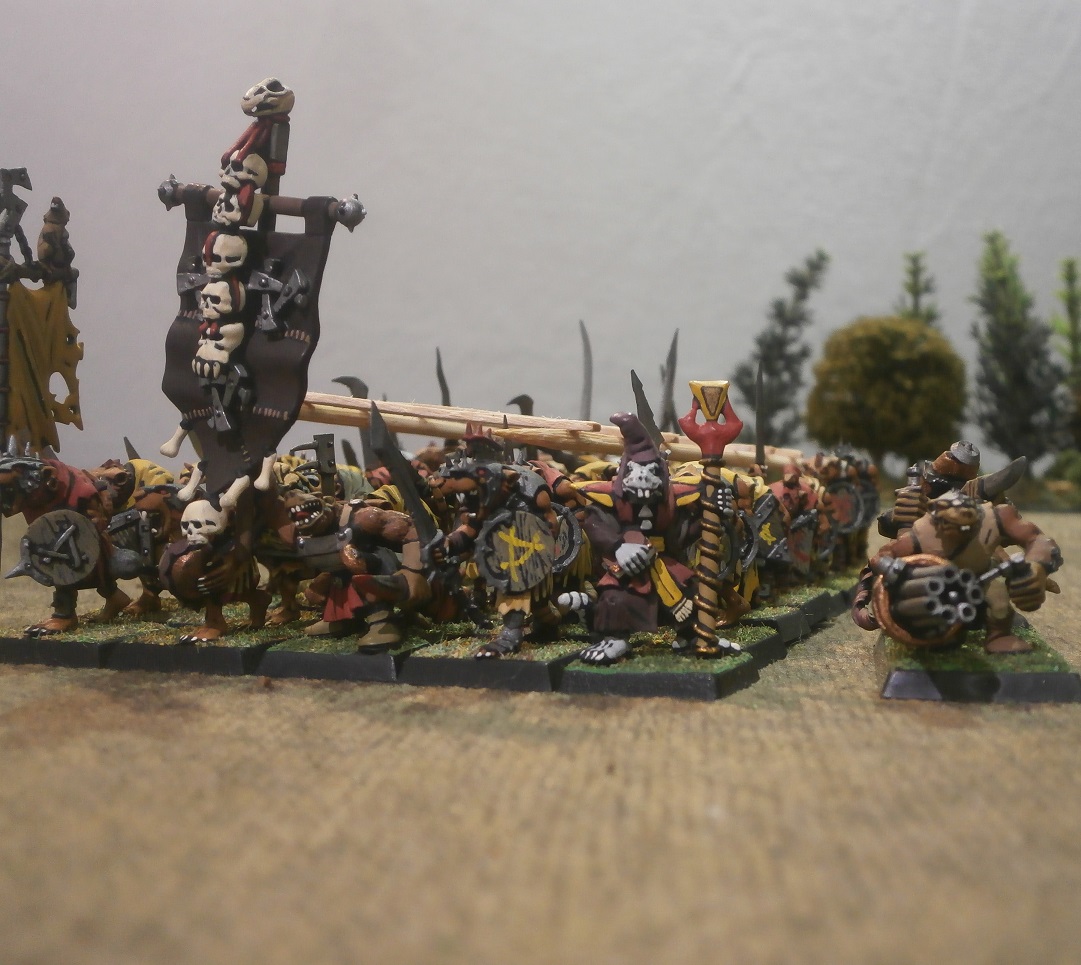 No-one would ever know whether he had always intended to topple the tower, and thus potentially his warlord. Perhaps Gurthrak had disappointed him? Offended him? Perhaps he was happy to sacrifice Gurthrak just to draw some more of the foe into the tower before it fell? Perhaps he decided Gurthrak might become stuck with a multitude of arrows from the brigands before he could strike himself? Maybe he did not care? Or did he just forget?

Besides, whatever the truth, it did not matter now. Gurthrak lived, and was left standing, somewhat winded, beyond the rubble.

On the other side, Baron Garoy and his knights were forming into a little company, all the better to face whatever came over the rubble. 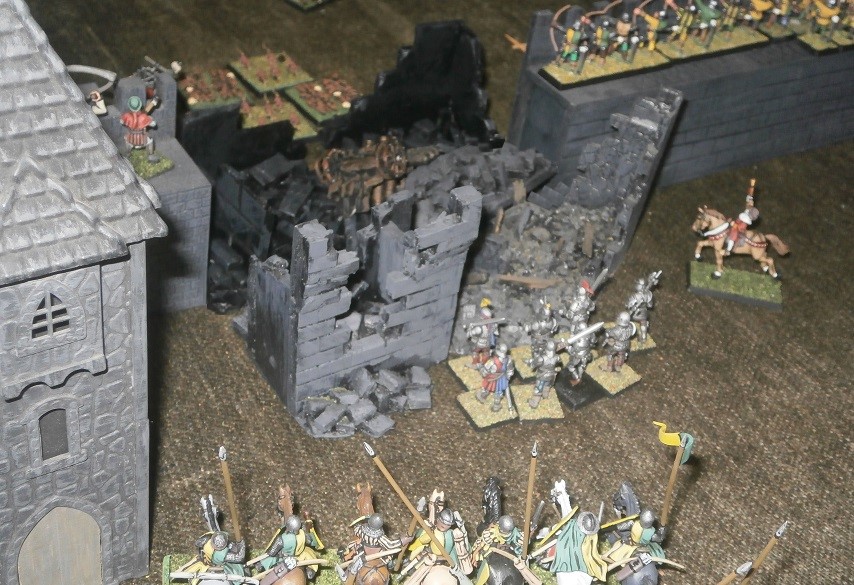 The red and yellow regiments had yet failed to reach the walls, but the rat ogres of Urlak’s bodyguard … 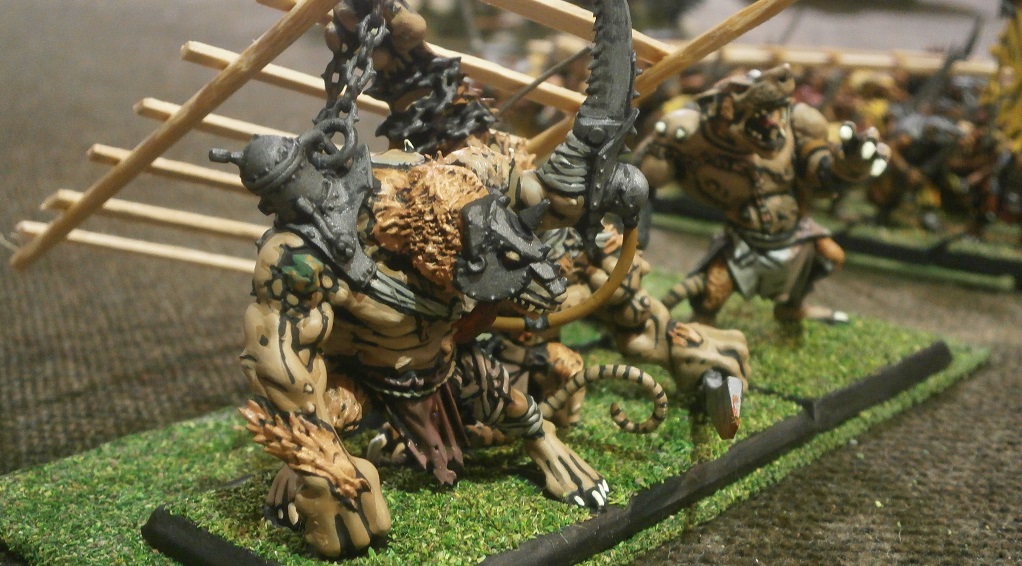 … did reach, much to the disconsolation of the poorly armed militia defending its rampart. The three massively monstrous rats hurtled up the wide ladder, and at the top they tore so viciously into the militia that seven perished before they could even lunge their improvised weapons. The rest threw themselves off the wall and scrambled off into the city, whilst behind them the brutes and their whip-wielding packmasters took possession of the battlements and released roaring snarls in bloodthirsy glee.

(Game Note: Even with +1 Init’ the peasants did not go first! And despite their re-rolled break test they failed. But who would ever expect ten WS2, Init 2, Ld6 peasants to hold a wall against three frenzied rat ogres?)

Further along the walls, the plague monks, however, found the fight to gain the wall much harder. Forced to use one arm to hold the ladder, and with the wall between them and the elevated foe, they only managed to kill one of the peasant militia, whilst losing three of their own. Their banner, being a cursed shroud of dripping death, fatally infected two more of the defenders, thus evening out the fight somewhat, but it was not enough to take the wall, and the fight continued.

(Game Note: Apparently twelve WS2, Init 2, Ld6 peasants CAN hold a wall against 16 frenzied plague monks! The siege rules say that in a draw the wall is not taken and the attackers are positioned 1” away from it to attack again in their next turn, but as it was a draw, however, the plague monks did not lose their frenzy. Unless the monks died in the intervening Brabanzon phase, we would see if the peasants could repeat the trick later?)

It was now the longbowmen’s turn to experience the explosive peppering of their battlement – two died to the ratling gun’s bullets and another to the jezzails’ shots. As the dust cleared, they set about knocking arrows to their bows. The enemy might be assaulting the wall to their right, had already taken the wall to their left, and their dwarf-gifted gun might be lost, but the trebuchet’s arm was being hauled back into place, Perette was still alive and the enemy had been very badly mauled indeed. There was still a chance, surely? And they were not yet ready to flee!

(BTW, I know the story doesn’t always stick to the strict order of phases in the game, but it doesn’t really change anything, while it does help the tale unfold better. I think!)