This to Reginaldo Scalise, Sindaco of the city of Portomaggiore, from Chimento Gagliardi, Chief Clerk to Lord Alessio Falconi.

My Lord Alessio has commanded me to inform you of the allied army’s current circumstances and condition. He wishes me to deliver a comprehensive account, for as his deputy in his beloved city, you must better understand the army’s requirements, the urgencies arising from our situation and the necessities of the daunting struggle before us. Furthermore, there is a task you must complete without delay.

We had rendezvoused with a brigade of the army of the VMC at Ebino, led by the Myrmiddian priestess Luccia La Fanciulla.

It was a force considerably weaker than that which was expected, and most disappointingly, lacking in guns, yet Lord Alessio was nevertheless undeterred. He ordered the entire allied army, including the Reman brigade under Captain Soldatovya’s command, consisting of mercenary dwarfs, crossbowmen and Reman bravi, to march along the dread road leading west towards Miragliano.

Our scouts reported that the watchtower of Soncino had been abandoned, which the army council took to mean that the enemy was aware of our approach and most likely drawing in its foul servants to concentrate his strength.

The army marched boldly to the watchtower’s vicinity and set about making an orderly and defensible camp.

As this work was accomplished, our scouts travelled further abroad to learn the villages of Leno were as quiet and empty as Soncino, having also been abandoned by the foe. The city of Miragliano itself, however, swarmed with the vampires’ servants, and its ancient, grey-stone walls hosted a force of rotting-but-walking corpses.

What most concerned the army council was the news that the putrid waters of the Blighted Marshes had been allowed to overspill their artificial bounds to claim the land around the city walls and, most likely, a good deal of the city within. 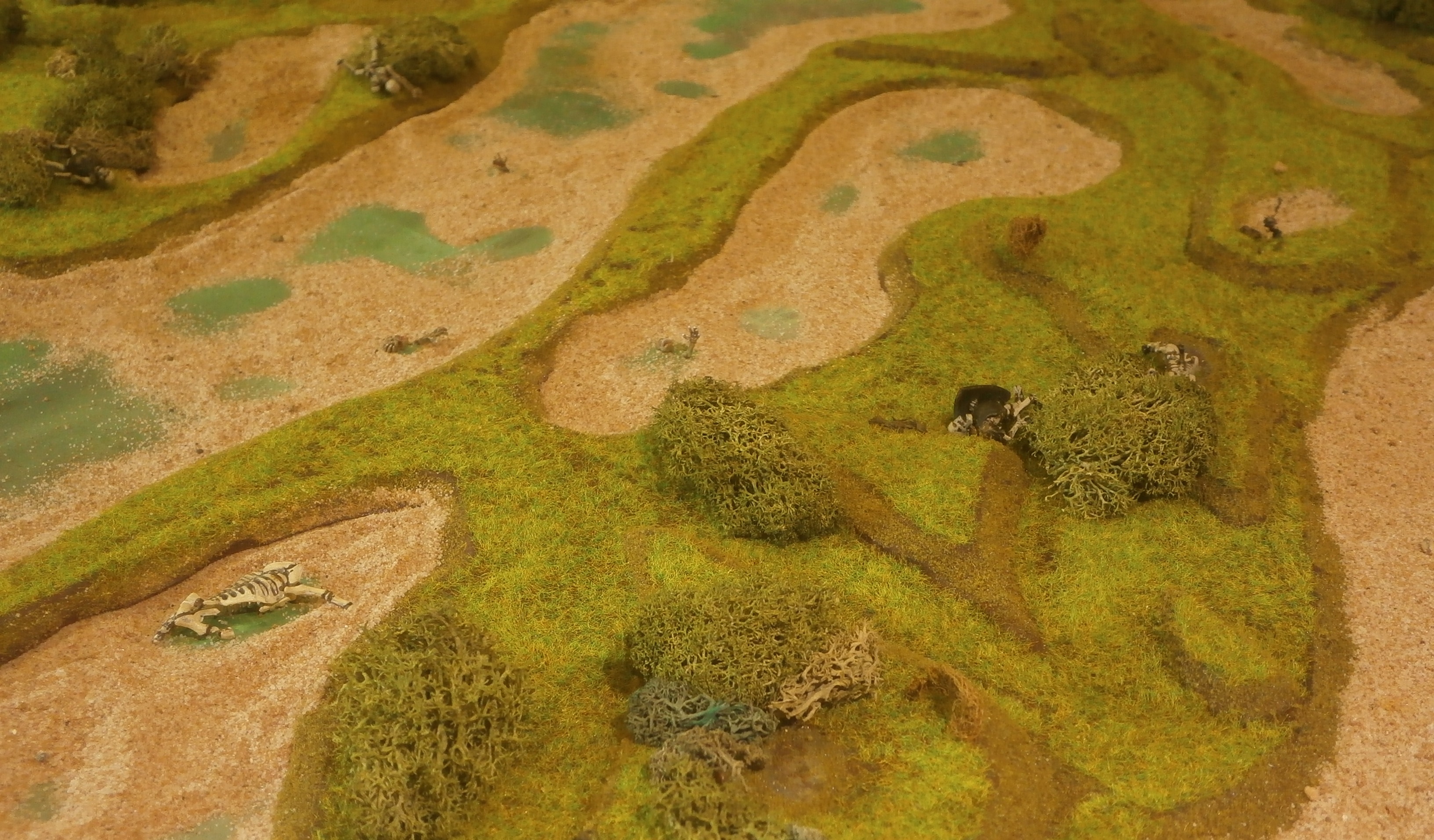 For several many years the dykes built to protect the city from the vast expanse of wetland to its immediate west have been left untended, so that now the once noble city seems to be sliding inexorably into the filthy waters. Even the road leading to the city has sunk beneath the mire, and the moat has merged with the wide expanse of stinking swamp stretching out for almost a mile in places, riddled with bloated corpses and bustling with clouds of filthy, fat flies. Miragliano is become, as indeed most of those in the army council had ominously anticipated, like a behemoth’s noisome corpse, washed up on the shore of a murky, accursed lake, infested with a host of maggots.

Lord Alessio spoke the plain truth when he said all this was only to be expected of a realm wracked by necromantic magics for so long. He ordered the army to march to the closest dry land to the city, there to build a strongly defensible camp … 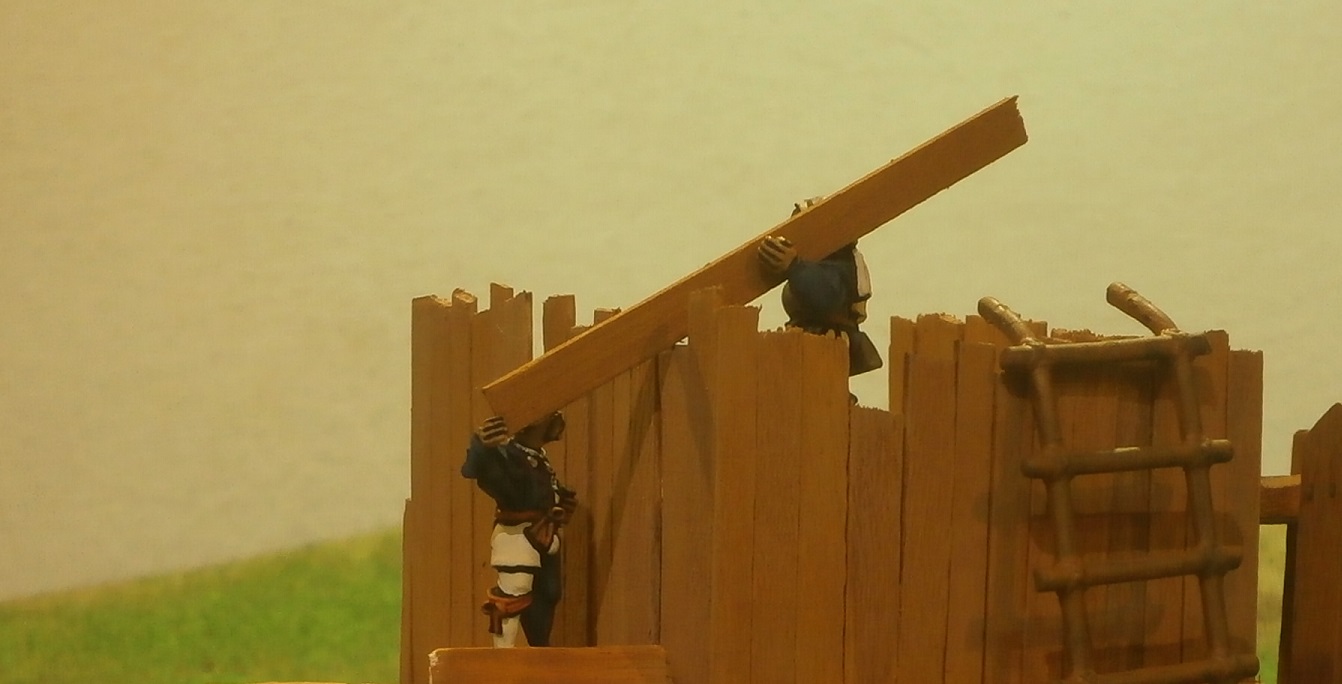 … and dispatched the scouts with orders to patrol orbitally about the camp to ensure nothing could approach unnoticed. The siege-master Guccio was instructed to begin work on siege towers and a ram able to approach the city walls. Meanwhile, a force drawn from both our army and that of the VMC should venture into the marshes there to clear out and burn the corpses, so that none remained to be re-animated by the foe in the oncoming assault.

Captain Guccio willingly took on his task and began pressing the men needed to better speed the work, from all three allied forces. Having questioned the scouts closely, he learned that the swamp may be crossable by foot soldiers, but only with great difficulty, thus it is he intends to mount the two towers and ram upon large rafts, which can then be poled, paddled or pushed to the walls, whichever proves feasible.

While Guggio’s men laboured to fell the necessary timber, much of the rest of the army set about not dissimilar work, building the camp on a large, relatively flat hill, about two miles from the city. Guards have been set in watches, ordered to maintain strict vigilance both day and night, with execution promised for any found to be derelict in this duty in any way whatsoever.

Having been here almost a week now, it has become evident that the enemy is in no rush to sally forth to give battle but seem content instead to lurk behind the city walls and the enveloping marsh. Whenever the wind, even but a breeze, blows from the direction of the city, the stench it carries is almost overwhelming, even for soldiers inured to the noisome airs of Ebino. Every day, soldiers bring the freshest water they can find to the camp, yet there is always corruption lurking in the taste of it, eliciting many a complaint. Our supplies of ale and wine are low, for we are now at such a great distance from the living realms, and there is a dearth of foraging opportunities within reach. Worse still, a considerable proportion of the supplies we brought with us – salted flesh-meat, cured fish, even the grain – has prematurely rotted. Perhaps inevitably, although still surprising considering how little time we have been here, a number of men have contracted a camp fever and their misery rings throughout the camp as they moan and thrash delirious upon their pallets!

The scouts have, so far, consistently reported that there is nothing out there. The land around us is truly dead. They know little concerning the marshes as it would be deadly for their horses to attempt to pass through such, so for several days we knew nothing concerning the areas closest the city and out to the south and west, where the marsh has overwhelmed the land. Until, that is, the clearing party returned from their attempted labours.

The VMC’s commander, Luccia La Fanciulla, acceded to Lord Alessio’s request to employ some of her troops for the cleansing of the marshland approaches. She ordered her mercenary ogres, under the command of a Captain Ogbut, as well as the wizard Serafina Rosa to join with the crossbowmen from both Remas and Portomaggiore, the latter commanded by Captain Lupo.

This force returned, however, after two days, reporting that they were entirely unable to complete their task, claiming that to do so was impossible, for not only did the marshes contain the dead, but hide the undead too. Concealed beneath the stagnant waters and quicksands, bloated and slimy zombies would suddenly reach up to clutch with a deathly grip at the legs of anyone attempting to pass through.

Several crossbowmen perished, dragged to their doom by an enemy that the others often could not even see, never mind kill. They had tried, shooting into the waters whenever they espied ripples, or the sudden appearance of a clutching, black-fingernailed hand, but learned quickly this was simply a waste of quarrels.

One of Ogbut’s ogres also perished … 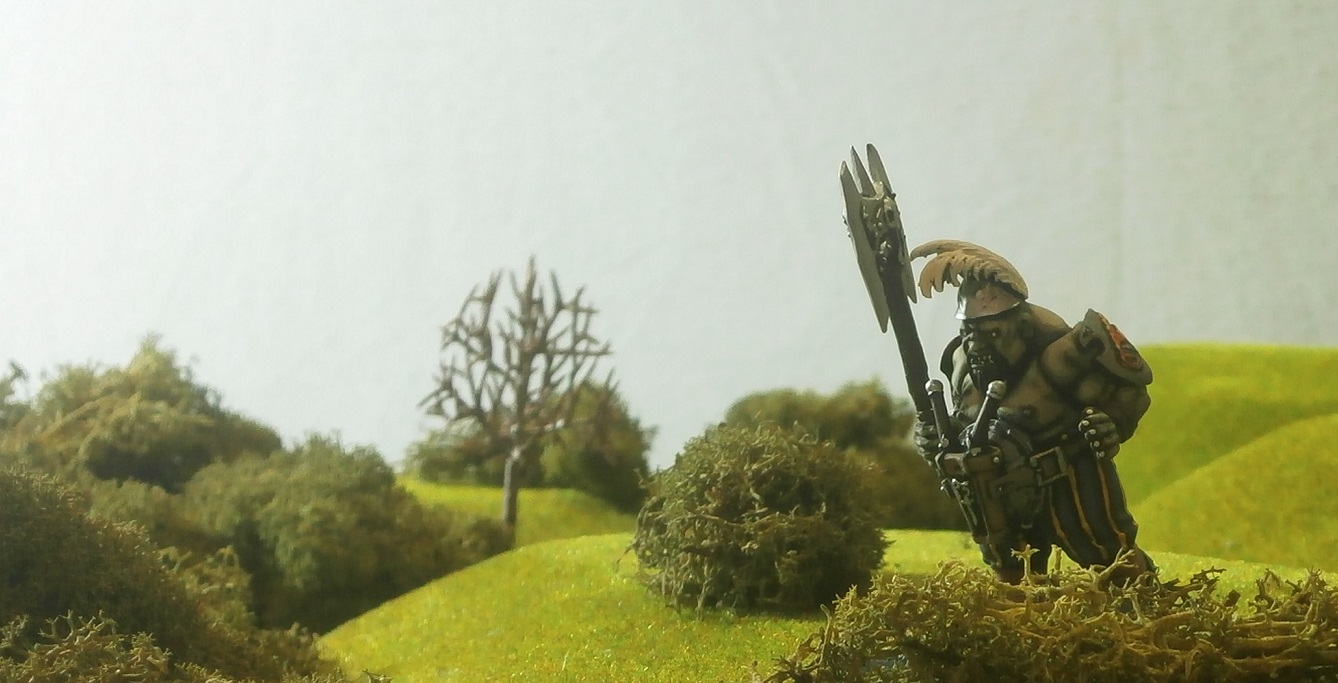 … tripping in the undergrowth as he tried to reach a skeletal corpse, and so tumbled into quicksand … 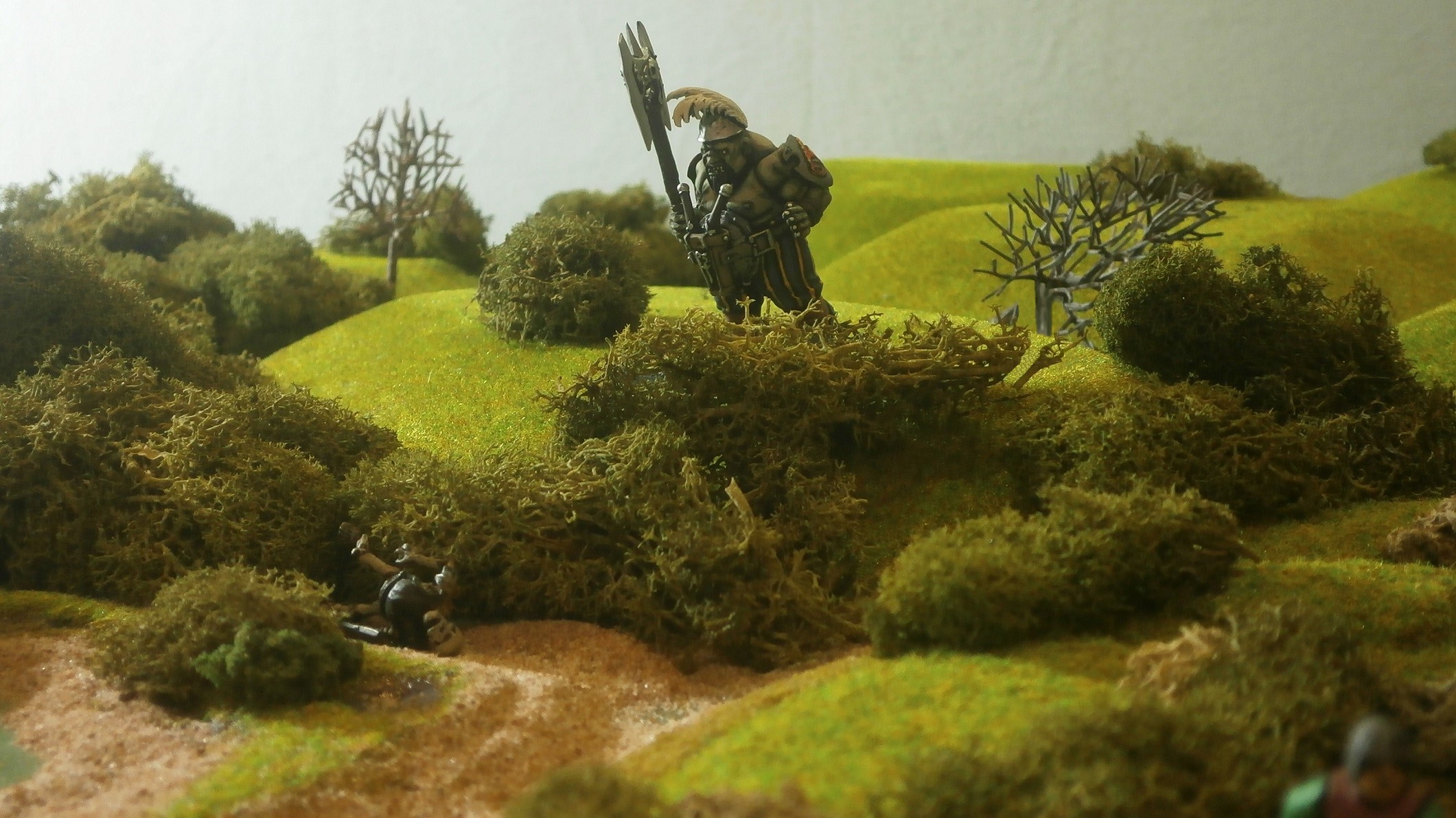 … there to be grabbed and pulled down, head-first, to join with the undead below.

Half a dozen crossbowmen have apparently been frightened out of their wits, and to add to those who perished, half as many again have since succumbed to the sickness assailing the camp.

Before they left off their grisly, impossible labours, this same party discovered that the city’s moat has become an impassable stretch of noisome water, which merges with the marshland reaching out, passable but, as already revealed, dangerous, some way from the moat. The road to the city, despite becoming submerged, is wadable, like the swamp, and indeed possibly passable all the way to the gate. In answer to Lord Alessio’s query, the wizard Hakim agreed that his colossus could most likely use the road, very much doubting that any bloated zombies lurking beneath the waters could either slow or hurt it, but he immediately warned that there would be the risk of the brass, mechanically-magic giant straying from the road and succumbing to the marsh, becoming stuck or perhaps even sinking below the surface completely.

The siege master attempted to reassure the Lord General by reporting that he and his men were making good progress on the rafts, towers and ram, which should much more safely allow soldiers to reach the gate and walls, first by dragging and pushing, then by use of barge poles or oars, so that even the moat would prove no obstacle.

Lord Alessio accepted that Guccio’s ingenious moat bridges had had great success at Ebino, but stated that here there were many more difficulties to overcome, and that even should the rafts reach the gate and walls, it was unlikely that sufficient soldiers could be carried thereby to successfully overcome the defences. The rest, were they to follow by wading behind, might succumb to a multitude of dangers.

This is why Lord Alessio ordered that I write to you and to several other rulers and governors of the realms between here and Remas. He is thinking of a way in which our forces might be better enabled to reach the city. What he has I mind will require a great workforce, consisting of expendable labourers and not the soldiers needed for the assault.

You are commanded to empty the gaols and prisons directly of all able-bodied prisoners, including debtors and those awaiting either trial or execution, and to gather all sturdy vagrants and beggars (whether imprisoned or not), no less than 1,000 in number, and send them all here to us, under sufficient guard to ensure that none can abscond, by whatever means and route is the quickest. You shall inform them that they are to be employed upon essential and righteous work, and furthermore, that should they survive this reparative labour, they will be pardoned of all past misdemeanours, felonies, debts and wrongdoings of any kind. And if insufficient numbers are thus obtained, then you are also to press into service all common youths unengaged in either apprenticeship or gainful employment that they too might be dispatched to us forthwith, to serve as guastatori sappers, for which service they will be suitably rewarded at the completion of this campaign.

Make haste and obey these orders in full, for the fate of Tilea lies in the successful conclusion of this war against the vampires. They cannot be allowed to recover their strength, nor even lick their wounds, but must be exterminated completely as soon as possible.