When Captain-General Lord Alessio had received all his scouts’ reports concerning the approaches to the city, it was obvious that no route was safe, but that one, at least, was potentially better than the rest. The taint of necromantic magic had permeated far beyond the city itself, so that (in places) the marsh and moat veritably teemed with animated corpses. Lord Alessio simply chose a way through which avoided what seemed to be the worst of those accursed spots. It wasn’t where the flooded moat was narrowest, nor where the outlying ground was least boggy, but there were gates in the walls there, which was the only absolute necessity. 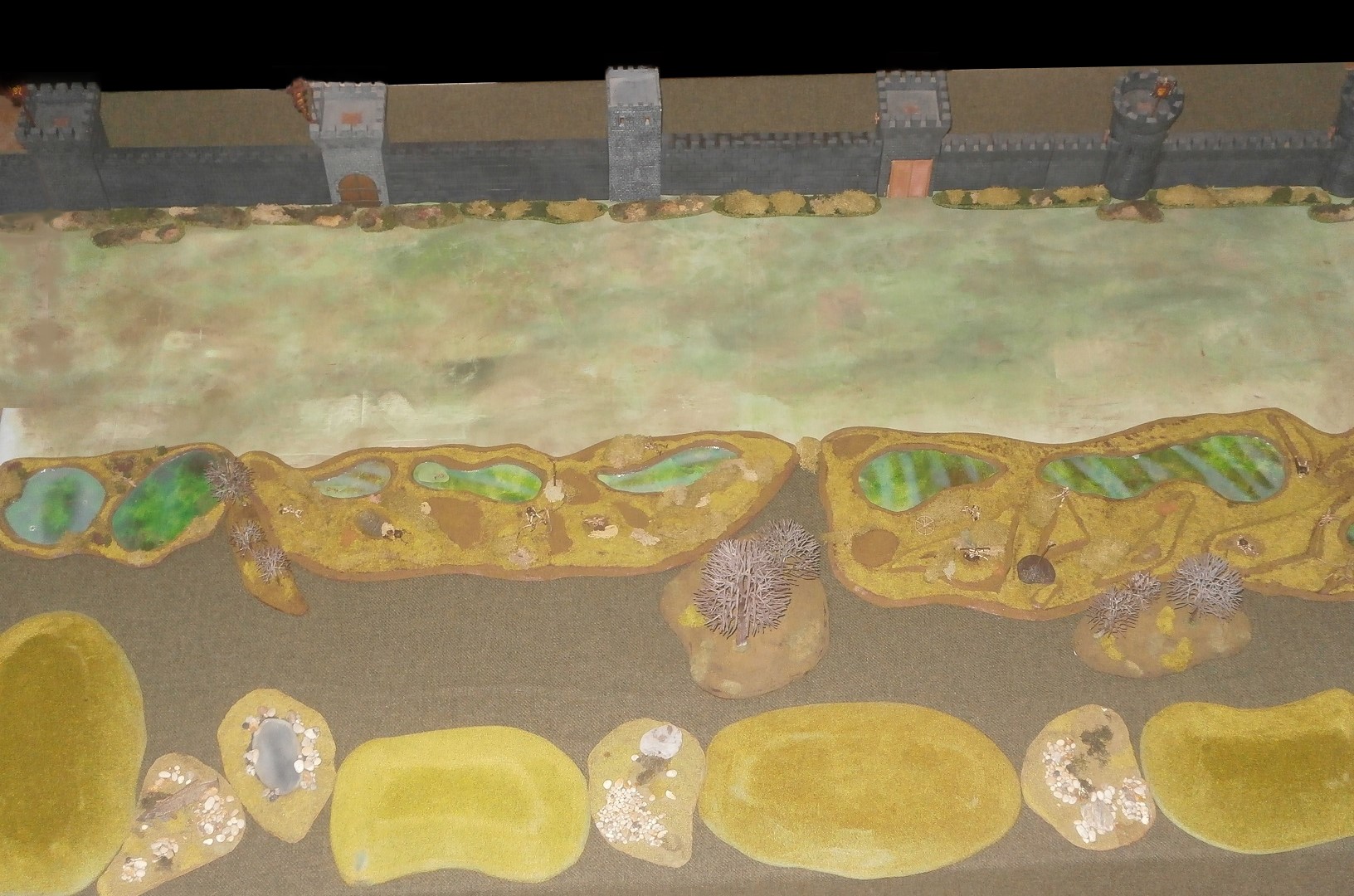 His plan was simple: his army would drag the rafts, as quickly as they could, to the moat’s edge, then launch and ride them to the walls. Most rafts would carry ladder armed companies, but the two heaviest had siege towers and the next heaviest carried a ram. Lord Alessio was hoping that sheer weight of numbers would allow his army to overwhelm the enemy, which in truth had been part of his strategic planning from the very start of the campaign against the undead.

He deployed most of his missile troops on the left, including his own Portomaggioran handgunners and crossbowmen (the latter commanded by Captain Lupo ‘The Wolf’ Lorenzo), as well as the Reman crossbow regiments, both men and dwarfs. The VMC’s handgunner detachments, he allowed to accompany their pike regiment on the far right, along with their independent handgunner regiment. He had lost all but one cannon on the march hither, and had been denied artillery reinforcement by the VMC commander’s strange decision to send only foot troops to support him. He placed this last piece on the far left, to play against the gate as best it could and, should it prove necessary, to fire upon anything monstrous emerging from the foul waters.

His intention was that such a weight of shot and bolt on the left would disrupt or destroy any enemy attempting to flank his assaulting troops either in the moat or the marsh. Surely very little could withstand the combined firepower of over sixty handguns and crossbows plus a heavy artillery piece?

The dwarf warriors, captained by the Kislevite commander of the Reman brigade, Soldatovya, were (like every melee regiment) equipped with a raft, and if necessary, would be available to engage an enemy on the water … 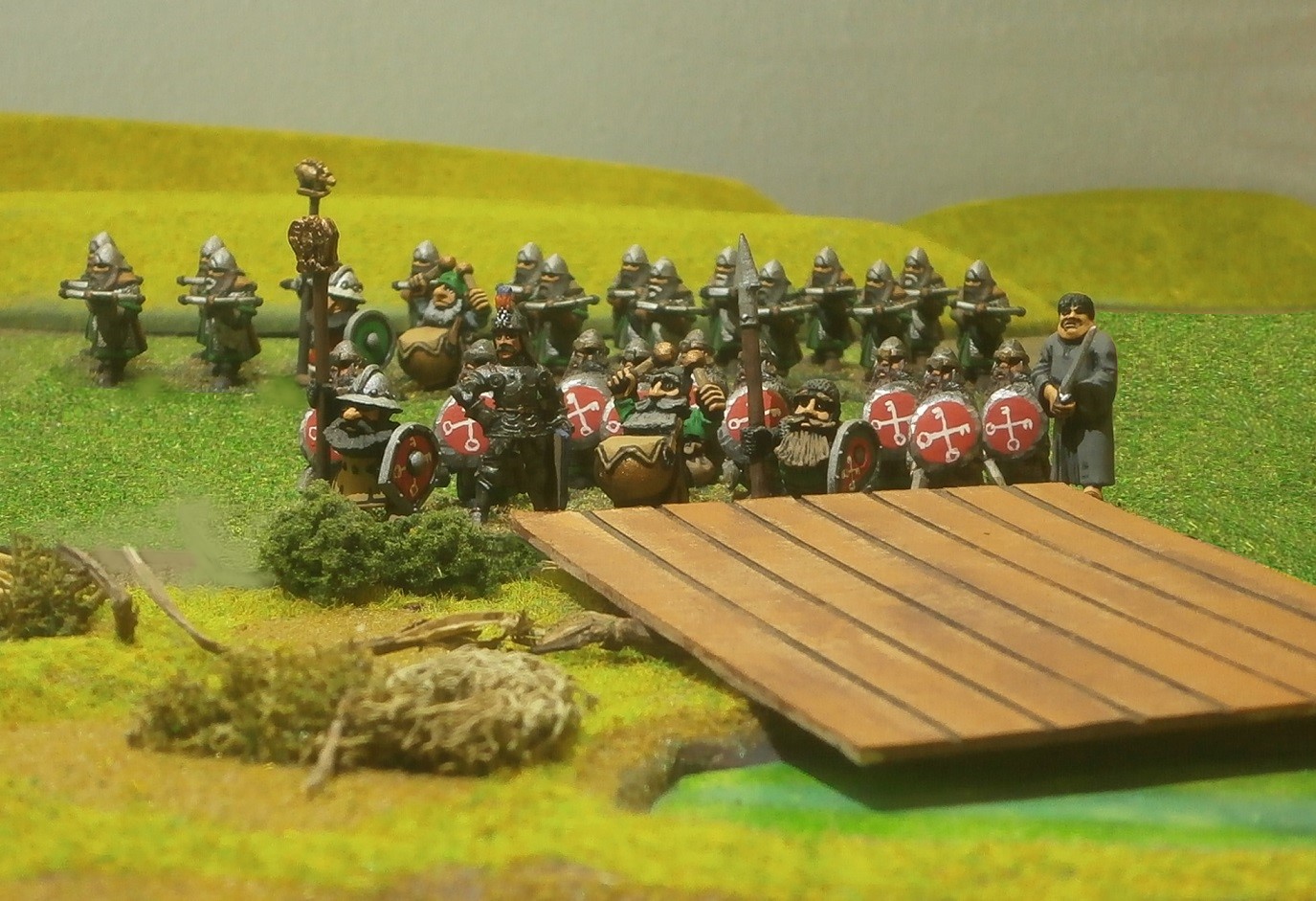 … while the skirmishing bravi were ordered to protect the gun from anything approaching from the flank or rear. The VMC apprentice wizard Serafina added a magical element to that flank, and the Reman Morrite priest Bernhardt (also with the dwarven warriors) should bolster the soldiers’ resolve in the face of the undead foe.

On the right, where his main fighting regiments were placed with the bigger rafts and the siege tower rafts, there was the re-sanctified carroccio. This, the general hoped, would lift the soldiers’ spirits, by channelling the mystical blessings of Morr, while the rather more mundane VMC ogres, led by the infamous Ogbut, were to smash through the gate with their raft-mounted ram.

Alessio’s largest Portomaggioran regiment, the spears, took position in the very centre of the line.

Such was their weight of numbers that he was happy to have them commanded only by their own champion. They would flank the ram, so that if anything were to attack from the waters, they might prevent it interfering with it. Then, of course, should the ram prove capable of smashing through the gates, they would join the ogres to swarm through immediately, crossing from their raft. 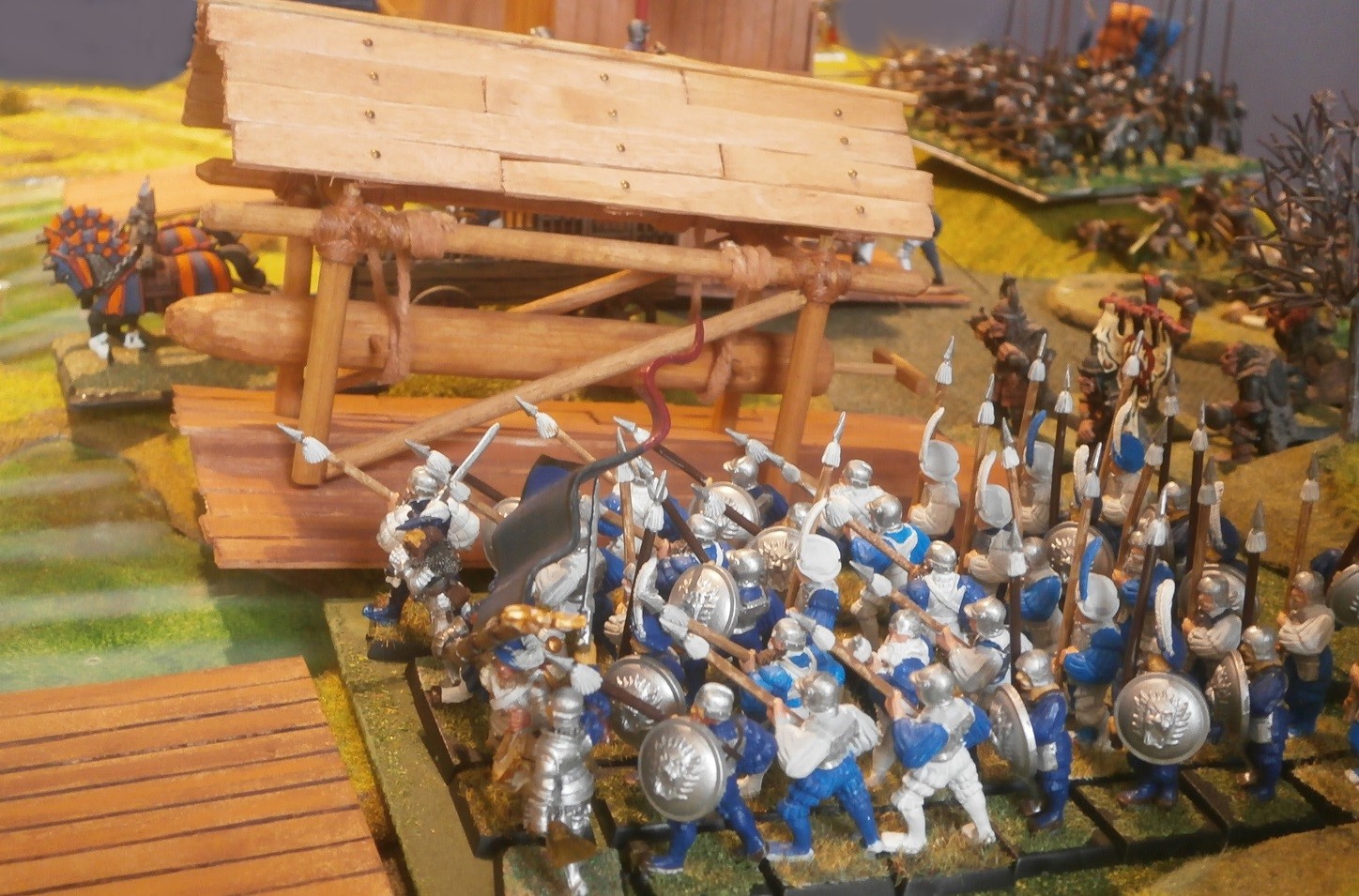 General Lord Alessio himself was with his Sea Wolf guard regiment, atop the siege tower from where he could scrutinise the entire line. Beside him strode the colossus, taller even than the tower top, and entirely capable (the wizard Lord Hakim had reassured him) of fording the moat waters.

To the general’s right, the crew of the carroccio had been ordered to get as close as was safe to the water’s edge, so that the holy aura of the relics contained within its chest would remain near enough to the fighting men that they felt its inspiring vigour.

The enemy had distributed its strength across the full length of the walls facing the assaulting alliance army.

Ghouls and zombies swarmed on most of the walls, in some cases so numerous that they could not all fit upon the parapet, while the flanking walls contained even more disturbing defenders, nightmarishly ethereal in form. The vampire priest of Nagash, Biagino, was hidden away inside one of the towers, as were his two necromantic lieutenants. He presumably saw no need to subject himself to the attentions of enemy shooting, although unlike at Ebino, he had not commanded his regimented warriors to remain hidden behind the walls. Perhaps the defeat he suffered there meant he now thought the tactic worthless. If it failed to help him previously, why employ it again? Or perhaps he believed the enemy might become dismayed by the numbers on the walls? Being an alliance force suggested the possibility that any particular part might refuse to fight as hard as the rest.

Fell bats awaited behind the far-right wall, beneath the Cairn Wraiths atop the parapet, chittering and flapping their wings in anticipation. The wraiths, in contrast, moved silently,

On the far-left wall, ghostly manifestations swirled eerily about each other …

… presenting the living soldiers across the water with an uncanny glimpse of just how tortured an afterlife could await those unlucky souls who fell under the dominion of vampires.

An uncanny light shone about them as they danced and wove around each other vigorously, but it was a brightness of such strange origins that it cast no reflection in the waters below.

Game Note: This is the field in terms of game play. As per our usual siege/assault rules, the outcome is determined at the end of turn 9 (if the fighting is still ongoing), based on the number of sections each side controls.

Sections 1, 2, 3, 5 and 6 consist of both a tower and the adjacent wall. Section 4 is the gate tower itself. Sections 7, 8 and 9 consist of three equally large portions of the city’s interior.

2 thoughts on “The Assault on Miragliano”