They had been sent to meet the new engine of war, to ensure it took the prepared path upon the final stretch of its journey, the surest and quickest way, to be brought safe and sound to the army. They had already visited its attendants’ camp, placed several hundred yards ahead of it, along the rocky valley. They had held their tongues, and none had spoken to them, for all were commanded so. The engine’s crew and guards were to speak to no-one, nor vice versa, under the pain of death. Gradger and Farrgrin must show the way with gestures alone!

Now, as they approached the engine itself, there was a disagreement between them, as Gradger suddenly came to a halt.

“No and never,” declared Gradger. “Not I. I shall go no closer. I saw-full the curse afflicted by the first such engine. Bursting boils and bleeding sores. Corpse piles. If it has stopped, then whichever idiot-fool allowed it to do so should be punish-whipped. We can show them the way without being close-by. We need not even look upon it.” 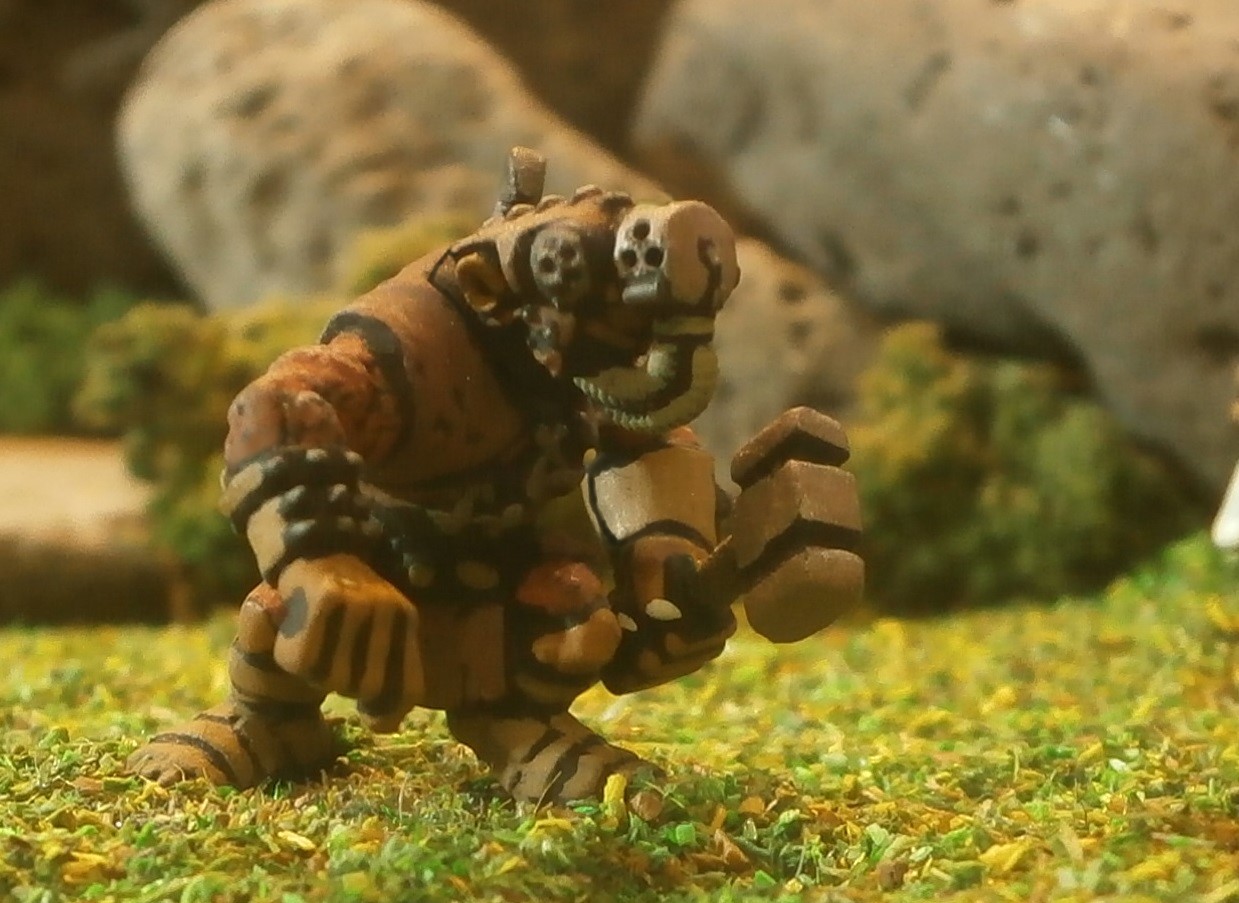 Farrgrin had rarely seen the engineer’s mate so terrified – a fuming fury of fear! Gradger had been nervous before, much worried, as was to be expected of all servants, and he was often inquisitive, on occasion perilously so, but never this filled with dread. It suddenly occurred to him that as an engineer’s mate of considerable experience, Gradger might be afraid he would be ordered to tend upon this new war-machine, to become part of its crew. That would explain his behaviour.

“Calm-quiet yourself,” soothed Farrgrin. “You know-understand little. This engine is not the same as the last. Not at all. This one does not bleed-leak death.”

Gradger’s snorted laugh in response could not, thought Farrgrin, be a pleasant thing to experience inside his mask.

“I know not which, but you are mistaken or false-lying, for if what you say were so, then what use would this engine be to all and any? What use is a bombard that does not kill?”

“You would do well-better if your mask did not make you deaf. I said-spoke only that it does not leak death. I assure you, this can kill-destroy just as well as the first – whole cities and armies entire.”

Gradger was shaking his head.

“How so?” he asked, “If it can be approached without harm, does it not bear the same poison as the first? Tell-explain.”

“Come now, brave friend, and I shall show-reveal all. When you look upon it you will see; you will understand.”

“No, and never. Only a double fool would draw near-close to it by choice. I have seen its attendant-guards. Each and all carrying goggle-masks and breathing tubes. Each and all in waxed-cloth and leather robes. Just as before. Just the same. If what you claim-say is the truth, then why would they do so? Why and what for?”

“Those are only the ones who are close to it every day, week after week. Those who merely pass by, to glance upon it, even those who guard it this night or that, occasional and rare, for only hours at a time, need wear no such things.”

“How can you know for certain-sure? You do not attend it. You have never even seen it!”

“I know for I have eyes and ears, and I carry messages for many a chieftain and clawleader. I have heard orders, read words. Come, we shall see. I would not go myself if it were not safe, yes? This engine is made better, bigger. Deadlier in use yet safer to move. All will run-flee before it or die and die by the thousands. None can face such a weapon as this.” 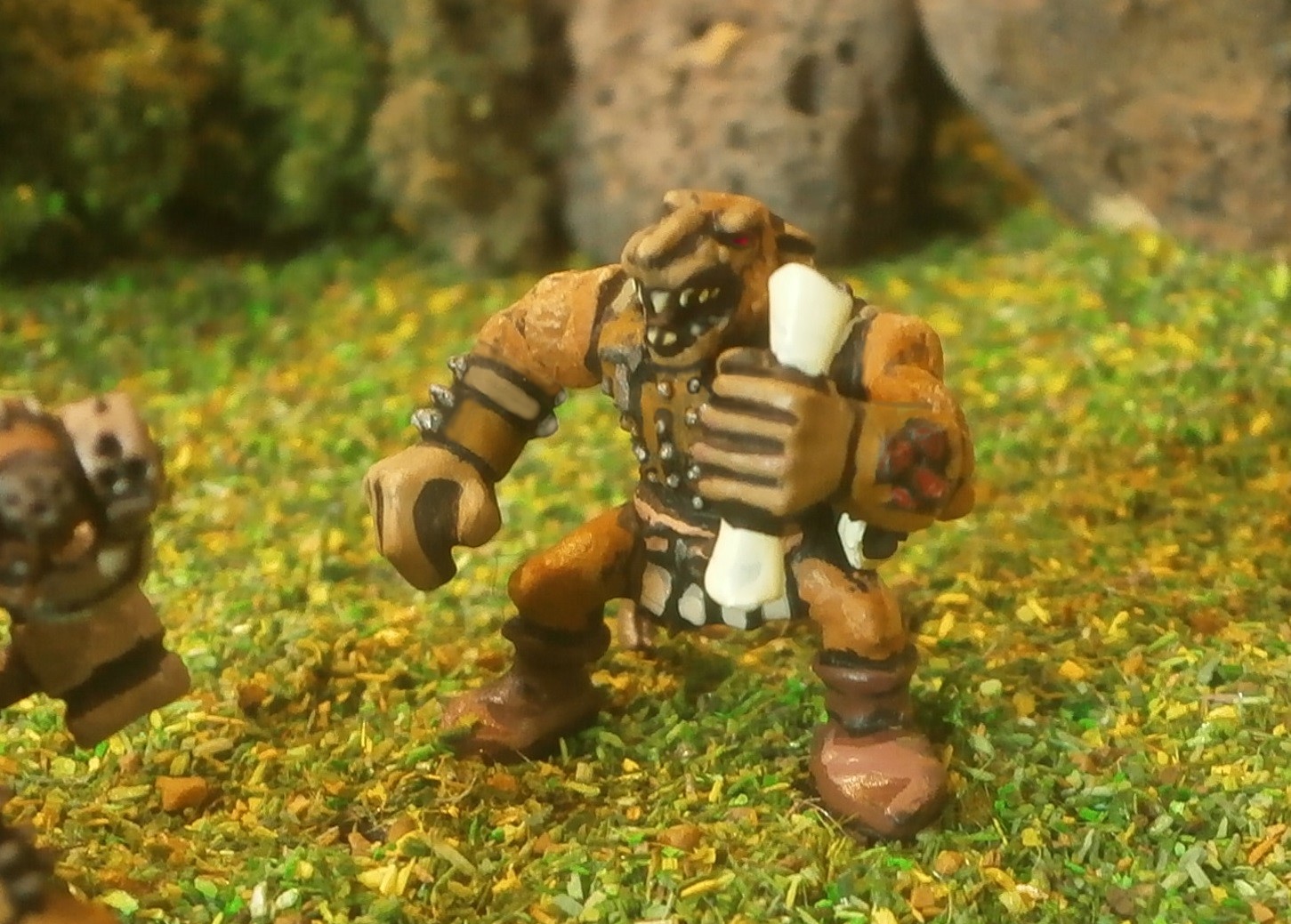 Farrgrin began to walk further down the rocky gully and Gradger reluctantly followed, the sound of hissing breath from inside the mask revealing his ongoing trepidation. Almost lost in the rush of fear, something was niggling at Gradger’s mind, something about Farrgrin knowing such secrets.

When they turned into the clearing to stand before it, Gradger gulped and pulled his mask tighter about his head.

“Look-see,” said Farrgrin, attempting to sound reassuring. “There, there it stands, and yet the green-grass about it does not wither-die. Its attendants busy themselves about it, with ne’er a sign of sickness-pain.”

Gradger was, for a moment, speechless. What Farrgrin was saying was clearly true, but now a new concern assaulted him. All that he knew of bombards meant he could not believe what he was looking at. The barrels, both of them, were so huge that the carriage seemed altogether insufficiently sturdy.

“It launch-fires two grenadoes?” he asked. “Why would anyone try-attempt such? How will it not shiver-break on first firing? How could it ever fire twice?” 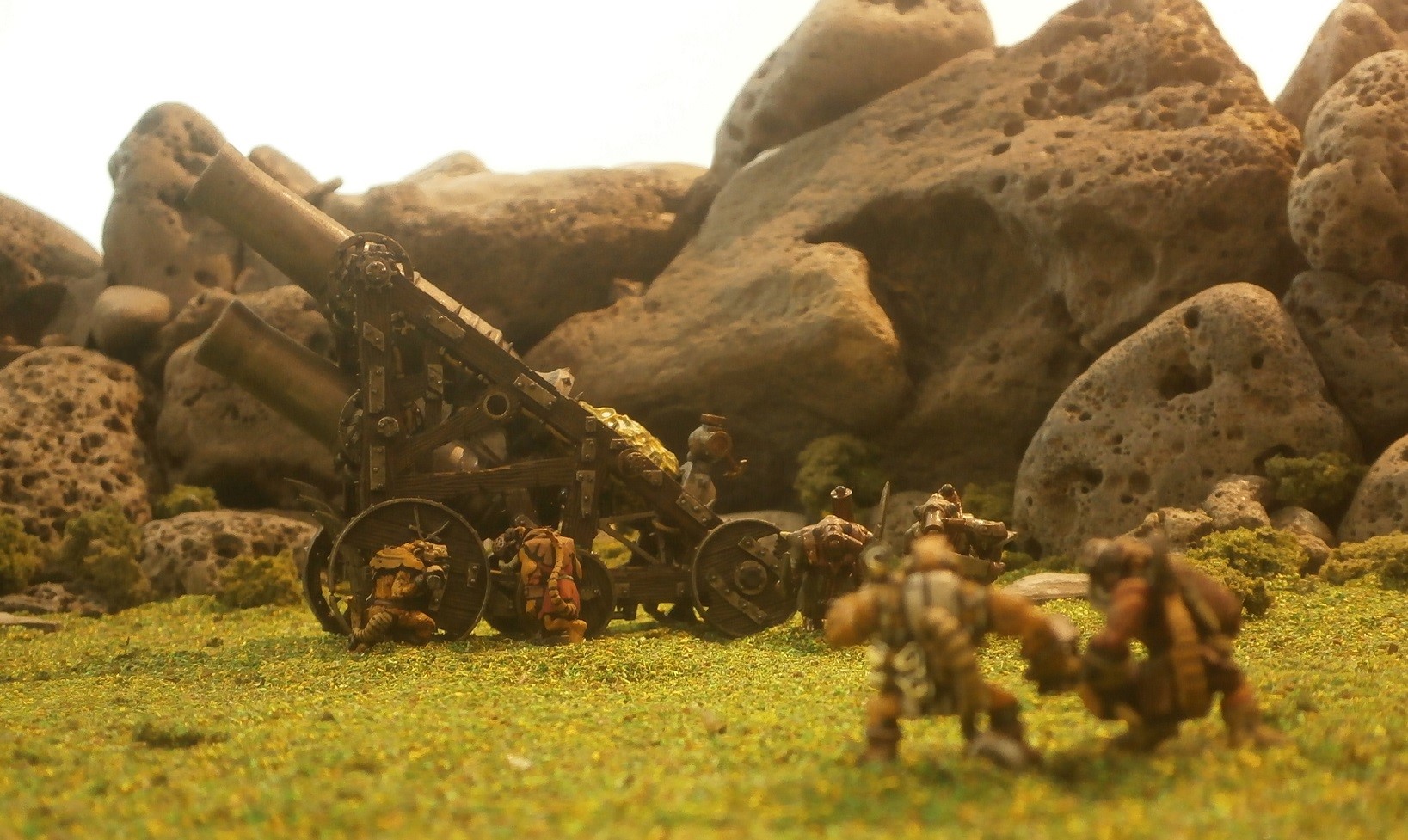 “Yes. Yes – it throws two,” said Farrgrin, feeling glee at knowing more about the engine than his engineering friend. “And at one and the same time. That way it need not fire more than once, for once is all and everything.”

Gradger seemed to understand. “Two to make one,” he said.

“Two to open a very hell upon the foe-enemy,” declared Farrgrin, getting a little carried away. “Each grenade carries only half that which is needed, and not the same mix at all. So, no poison-leaks; no forever moving. Only when broken and mixed are they made deadly: explosively and massively. The poison is a gift only the enemy-foe will know.”

Inside his mask, Gradger’s eyes squinted as he scrutinised the engine.

“No, no,” he said quietly. “This is asking too much. Both to fire at once; to follow the same course; to travel the same distance; to break at the same moment. This cannot be done! Such would surely need too perfect-pure an alignment, in elevation, in weights, to the tiniest degree. Even the burning of the primer would have to be exactly equal. Besides, such a carriage could never bear the strain-shock of a double discharge.”

“Perfection is not required,” explained Farrgrin. “The grenadoes are made to burst big, and that which they hurl forth only need to caress the cloud made by the other to bring forth their destruction. I saw-read it. I carried the orders, the explanations. An infusion of occult virtues, they said. The incendiary sublimination of both sulfurous and mercurial warpstone, to ferment a projected multiplication of a deathly quintessence.”

On any other occasion, Gradger would surely have immediately questioned how it was that the likes of Farrgrin was allowed to peruse such arcanum, but just now he was still too tangled in other thoughts. 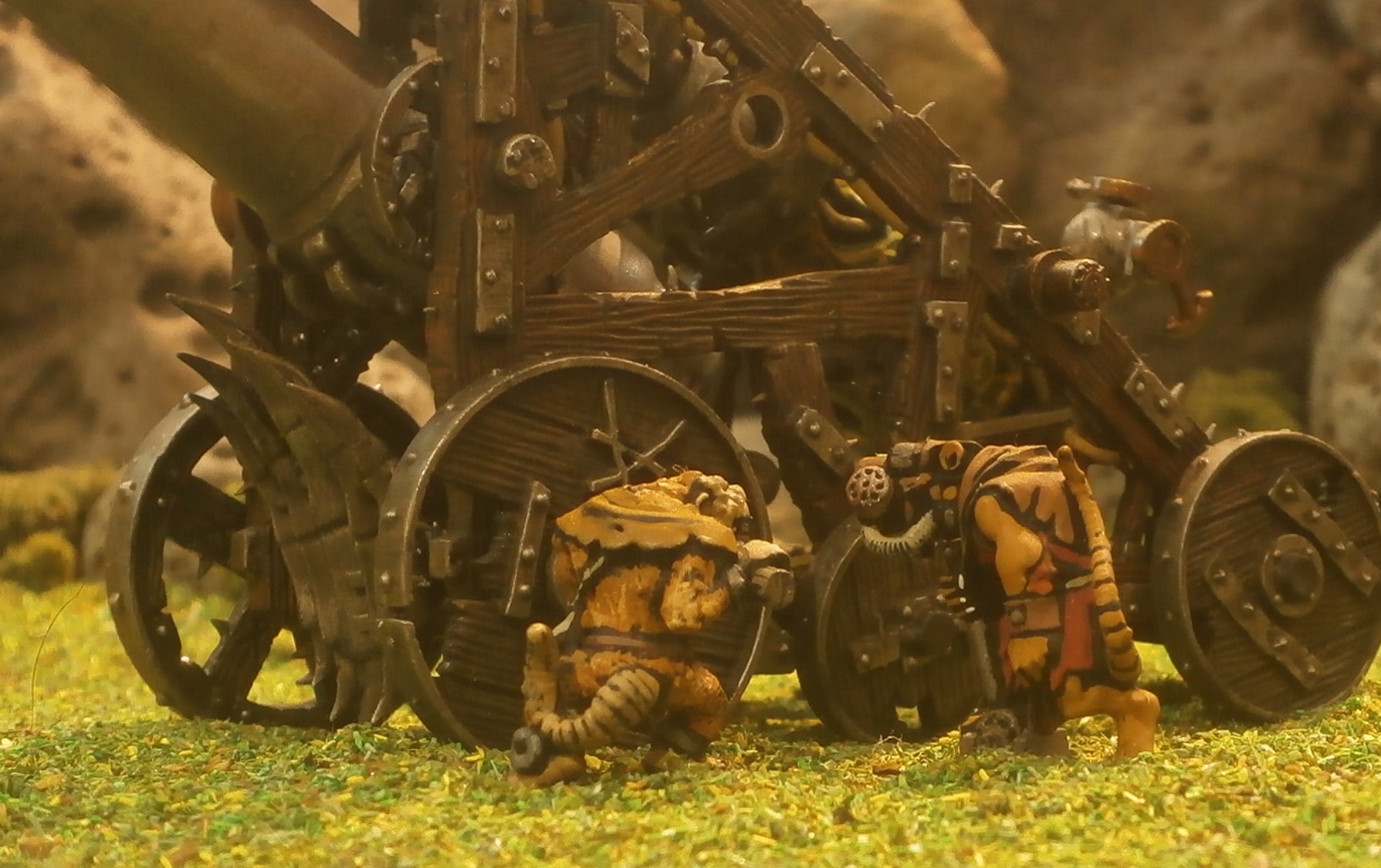 “Yes, yes, stirred together,” he said, “even the vapours thereof, it could be done, but only by one who was prepared to die in the doing of it. For this to do it, that is too much. The first engine was simple: wheels, barrel and bomb. It was to throw already blended death, already potent poisons, which need only shatter and burst in the right spot-place. All it had to do was fire-shoot but one grenado. Simple indeed, yet still it failed. Who would think that by attempting twice as much, necessarily in one and the same moment and in perfect unison, success was more certain?”

“You can think it,” said Farrgrin. “Consider why the first one failed. It plague-burned all and everyone who approached. Even those who attended it, despite their protective filterings and robes, were slowly poisoned. Its very own crew, in the moving of it alone, themselves suffered a slow death. How could they expect-hope succeed when so pained, so afflicted?”

Gradger was not satisfied with this answer. “You can believe it, but you cannot know. There are none alive who really know what happened to the first, only that it burst-blasted the land through which it rolled, and not the city.”

“Yes, yes,” replied Farrrgin. “I and all know that. All within sight-view of its failure died. But Gradger, you saw those who attended it – escorts and guards. You saw them weaken-fail. You saw the corpses of those who died on the journey. You saw the ground poison-burned wheresoever it moved, the circumexpiration it scratched around Ravola. Whatever mistake-blunder its crew committed, whatever foolish fault, whatever shoddy choice-decision they made before Campogrotta, their pain-addled minds cannot have helped. This time, with this engine, there will be no such failure. Those who tend it will have clear minds, and the strength of will and body to do all and everything that must be done. “

“Maybe so,” said Gradger. “Perhaps they could practise a most perfect precision. But timber, iron and black powder are what they are, no more. Bolts, braces and brackets are only as strong as they can be. The mere moving of such an engine will stress-strain every part, slowly but surely weakening the whole.”

“Hush now,” ordered Farrgrin. “Speak-say no more of this. Keep your worry-fear to yourself. Much is expected of this engine. None may ridicule-mock, none may cast doubts, not without punishment.”

Gradger fixed his eyes on Farrgrin. “Friend Farrgrin, promise me. If ever you carry orders to make me tend this engine, scratch out my name-mark. For that I will be in your debt-service and will pay much and more.”

“Willingly, friend Gradger, I promise and assure,” said Farrgrin. “If I am given such to carry. For now, you work hard upon your own engine. Be necessary-irreplaceable. That way and then you will not be asked to tend this one.”

Gradger was not convinced, for he saw a dilemma. Hard work might well mean being kept in place, but it could easily mean promotion instead. If this engine was the most important in the army, then would not the best engineers and mates be assigned to it? And double the dilemma, for shoddy work and laziness might lead to punishment, which could take the form of being assigned to this, the most dangerous of weapons to its own crew. Depending on the commanders’ whims, either good working or lazy shirking could mean being forced to work this engine!

How could he possibly know what to do?