Here are the completed (though unbased) undead ogres I made for Tilean campaign. The background is that an NPC Tilean lord (Lord Adolfo of Viadaza), who has some orcen blood in his veins, becomes a vampire and not only raises the dead – having cunningly got rid of the Morrite clergy to allow this to happen much easier – but also zombifies his current army, mainly marines and ogres. Due to his own corrupted blood he himself became a ‘counts as’ Strigoi.

I wanted the ogres to have Crypt Horror stats. Perhaps Lord Adolfo allowed his brutish warehouse guards and pit fighting thugs to drink a tiny portion of his blood and so created his own version of these monstrous undead? That way they would become something like Crypt horrors rather than merely oversized zombies, and also could maybe, in the future, reinforce my own ogre army (as if they were some weird Ogre cult or clan allied to the army). Also whenever the vampire player in my campaign asked to borrow some ogres to bulk up his Crypt Horrors regiment, as he has on several occasions, I could now lend him some blue-skinned ogres that kind of fit in with his blue-skinned horrors, which would make for better pictures.

Several have decorative bones piercing their skins, an idea lifted from the official crypt horror models, and I tried to make these look more like vampire/ghoul ogres than rotting, zombie ogres.

Here is the unit as a whole:

Here is an ex-pit fighter. He has a chain attached to his skull – I reckon that might work with an ogre – and carries in his left hand a torn up gravestone as a weapon. (The latter idea I got from reading the crypt horrors fluff in the most recent VC army book.)

The next must surely have a headache, which cannot exactly make him the most agreeable sort of fellow. His right weapon is a flail made of skulls from my bits box. (I had apparently already chopped one skull off for some other project!)

The next one has some fun weapons – a beast’s jawbone and a big stick with a skeleton skewered on it. 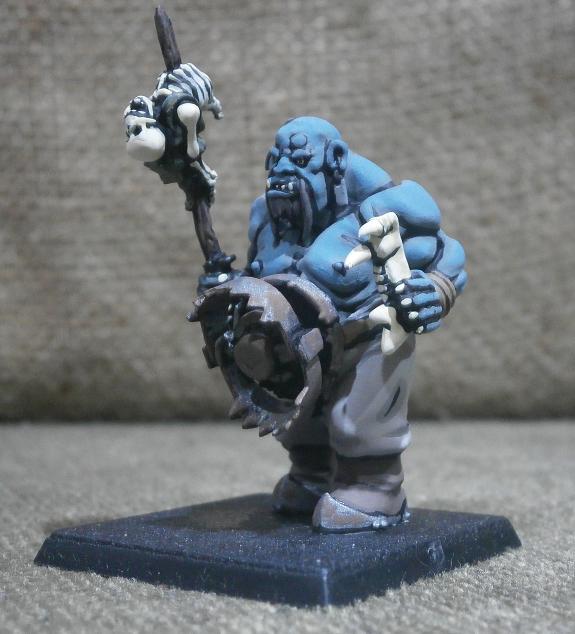 This next guy is my favourite. I tried something I have never done before and made his flail with real chains, attaching two skulls and a more meaty severed head. The chains actually swing about as you move the figure. Cool. 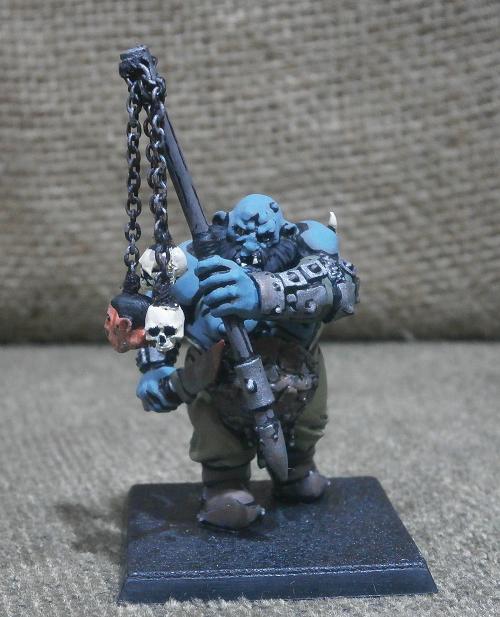 This fellow has an ogre weapon and another weapon which I think is from an orc figure, but is a wonderfully vicious looking thing that seems just right for such a creature.

The last is also inspired by the fluff from the VC army book, where it said that crypt horrors might use graveyard railings as weapons. This is a very tall railing, perhaps from next to a gate, and has been prettified up with some lovely skulls. This was to count as a standard bearer if used as an unusual Ogre army unit.

One thought on “Undead Ogres”