Off the Coast of the Southlands

All hands in the fleet had been awake when they passed to the east of Hurry By Island. All eyes had scrutinised the forested slopes and white beaches, even the sea windward and leeward for signs of danger, yet none had come. By nightfall only a few of the naturally fearful assumed the worst – that any attack from the undead pirates would surely begin after dark. The vast majority were happy to agree that Grand Admiral Galdabash must have moved on from the island, no doubt upon some cruise of his own.

Three days later the Tabrizian ships were anchored in 20 fathoms of water about a quarter of a league out from the mouth of a wide river. Every perspective glass, every lunette d’approche and every eyeball that was not purblind or permanently ruined by years of glaring sun was trained upon the hills flanking the entrance, and with good reason, for it was obvious that there was a settlement of some sort upon the northernmost one. Several ships’ boats approached closer to peruse the hill in question, and when they returned the news spread like wildfire throughout the fleet – there were defensive works upon the hill. Nothing too fancy, just some scattered palisades, banks and stormpoles, but at the very top there was a ramshackle bastion which sported a huge artillery piece, a forty or fifty pounder by the looks of it, perhaps bigger. It was the kind of cannon only the largest of galleons could hope to carry and it was aimed down at the river mouth.

Its purpose was obvious – to fire upon anyone foolish enough to attempt passage from the sea into the river. A shot from that piece could tear a huge ragged hole in any of the fleet’s ships, being as they were the light, fast, clean and weatherly sort of vessels that pirates most desired – sloops, brigantines and caravels. None were made to withstand that kind of heavy shot, they would be shivered and splintered for certain. And if the cannon was loaded with sangranel and swan shot, chain or double head, then it would without doubt tear masts, rigging and men to pieces, and pour horrible destruction down on any boats if the pirates attempted instead to take pinnaces and boats up the river. As for accuracy, it would surely have been carefully sighted and already tested so that it was trained exactly where it needed to be.

One solution was to attack the bastion and spike the gun, which considering the strength of the fleet might not be thought too difficult. The trouble was, however, that the scouts’ reports had not ended there. After a silent prayer to whichever god they thought might listen, they had revealed that the hill was occupied by what must surely be part of Galdabash’s forces. His ensign, a death’s head flanked by a dagger and a heart, above a single bone, had been spotted flying upon the summit near the cannon, and the breeze had carried the sickly-sweet stench of death from the shore. Little had been seen of the garrison, but their shambling gait and the accompanying clouds of fat flies were considered sufficient proof that they were undead. 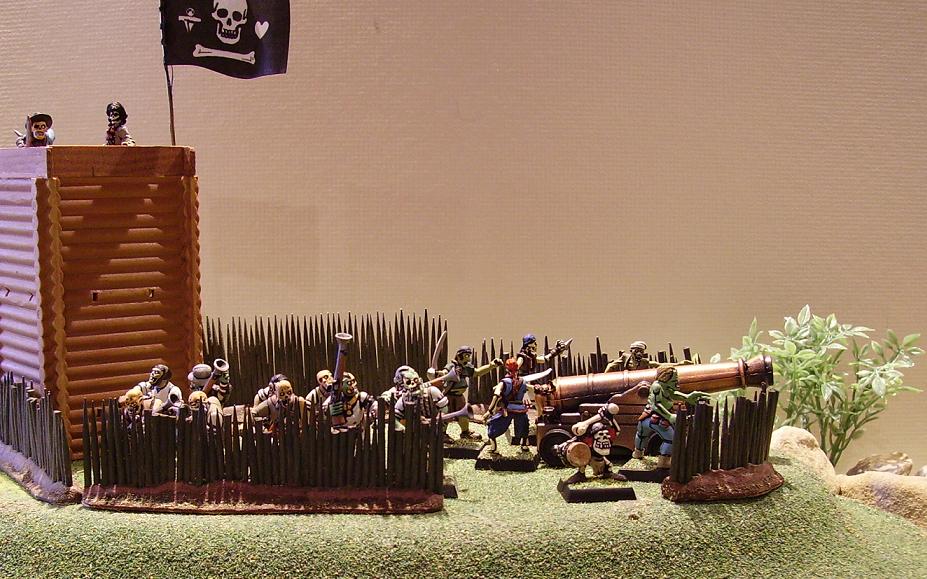 If the decision made to embark upon this venture had been difficult, they now faced a much more difficult one: who would go ashore to attack the gun? The captains gathered aboard the flagship, the Ocean Blight, for it was Captain Bartholomeus who had been elected admiral of the fleet. There the options were argued over: whether to draw straws or to use dice; whether to have each crew send half of its men, each to decide on the method of choosing. In the end a much more agreeable system was chosen. The captains would volunteer for the job (with their crews’ voted consent, as was always necessary for a change in agreed strategy), and every man who saw the job through to the end would receive a whole extra share when the booty from the city was divided.

This was enough to encourage several crews to volunteer. Captain Bartholomeus and his men were first to put themselves forwards, being able to vote before the other captains had even returned to their ships. Much to his consternation, Wilfred Mostert discovered his double vote ([i]as captain, of course, his own vote counted as two[/i]) could not save him, and his crew, including the Arabyan swordsmen regiment sent by the Tabrizian agha Zazarri Marwan, voted to join the attack. The others included Thodrin Hookhand’s slayer dwarfs, the ‘other Bart’, Bartolomeo del Portes, and finally Captain Claudio Sagrada who volunteered to provide artillery pieces and their crews to support the attack. There was some grumbling that artillerymen could surely not expect a full share, but most accepted that just landing on the shore and arraying for battle against such a foe was deserving sufficient to earn the reward.

As the boats with the attacking force set off towards the shore, upon the bastion there was silence. The dead rarely speak. Four rotting men stood perfectly still ready to fire at their master’s command, while a fifth clung with one gangrenous hand to the palisade, his legs so mangled that he was barely able to stand.

(Erm, yes … it is a pencil sharpener. Waste not want not. If my pirate zombies are a bit ‘comedy’ then their cannon royal can be too!)