Objectives:
The Tabrizian Pirates are to try to disable/destroy the Queen Bess (a giant cannon) so that the fleet can pass by the river mouth.
The undead pirates want to stop them, so that they can deny access to the river (Galdabash has more forces up-river searching for a certain legendary city).

Other considerations:
The Zombies have some defences – sharpened stakes called stormpoles and some palisades, and so have slightly less points. There is also the fact that the 250 pt Queen Bess might easily blow up if fired (it requires two artillery dice to be rolled and is thus twice as likely as a normal cannon to blow up) and as that would be default win for the Tabrizians it could only be fired in desperation. Thus 250 points are tied up with a practically unuseable gun, which again balances the fact that the Zombies have terrain that much favours them.

The battle to last 7 turns (like a 6th ed WFB siege scenario).

Nigh upon twenty boats of various sizes, all packed solid with passengers, made their way towards the shore, the smaller ones riding the choppy waters and almost tossing their occupants overboard as they got close. Only the Arabyan swordsmen wore armour and they were in one of the larger boats, so none were in too much danger. Besides, considering what faced them, high waves were the least of their concerns.

As the force waded through the surf the umpteen handgunners amongst them tried to keep their pieces high above the water. Being salty-sea dogs of some considerable experience all had of course waxed their pans for protection and several were carrying glass jars with coils of slow-match inside so that it too would remain dry. Once upon the dry sand, while the handgunners poked the wax out of their pans, broke open the jars and fiddled with flints and steels to light their matchcords, the captains and mates immediately began ordering everyone into fighting bodies ready to advance up and over the scattered dunes. Ahead was the rising ground where, just before the thick tangle of the jungle, rose the fortified hill upon which the ghastly undead had placed the massive ‘Queen Bess’. Unexpectedly, the huge cannon was still aimed at the river, and stayed so while the undead mustered their own companies on the slopes in a grisly parody of the Tabrizian pirates’ deployment.

It occurred to many of the living seamen that if the great gun hadn’t shifted position then it might not be used against them in this battle. Perhaps Galdabash was keener to ensure no boats used the battle as a diversion so that they might attempt to slip by? Mostly, it was another, less tactical thought that was at the forefront of many a Tabrizian’s mind: it was entirely possible that amongst the undead foe stood some of their old accomplices and crewmates. This sent a shudder through all those who thought it, followed by a second shudder when they wondered whether by nightfall they might also have joined the undead ranks.

The field of battle was horribly empty of any form of cover. Between the dunes and the foot of the hill there stretched an open space, flanked on the right by the river mouth. On the expansive lower slopes of the hill were two thin lines of sharpened stakes, with a dangerously inviting gap in the middle that must surely have been left so that some form of counterattack could be launched. Unless, perhaps, Galdabash’s unliving slaves had simply not yet had time to complete their defences? 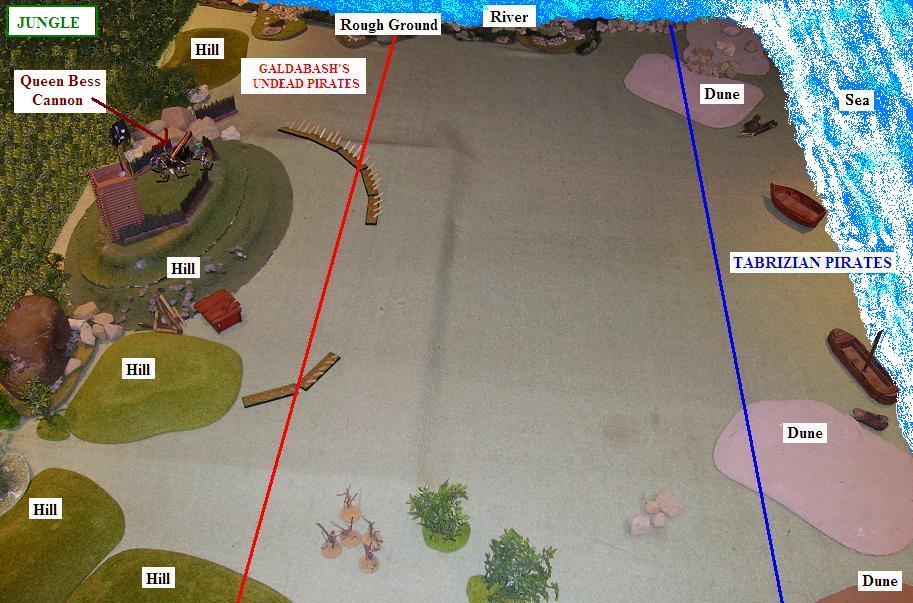 As the main battle line arrayed itself, the Estalian captain Bartolomeo del Portes led his skirmishing company of duellists up on the far-right flank, across the rough ground along the bank of the river mouth. He had it in mind to steal the glory and sneak up to the Queen Bess while the rest of the army entertained the foe with their deaths. To his left Claudio Sagrada, acting as engineer, emplaced a brace of cannons upon a dune, close enough together to allow him to lend skilled help to whichever one took his fancy. Below him, towards the centre of the Tabrizian line, was the reluctant Captain Wilfred Mostert and his crew, standing sullenly while Mostert tried desperately to look as if he was in a fighting mood that day.

The real centre of the Tabrizian line was made up of the three companies of handgunners, provided by each of the captains present, as well as Captain Pasterkamp’s fighting crew and the slayer dwarfs of Thodrin Hookhand. All in all, it was a solid enough looking centre. Out to the left was a mortar, occupying the same dune as an Arabyan detachment of crossbowmen. Beyond them marched the black-clad Arabyan swordsmen, and finally out on the very left, a single cannon (the crew of which were fervently praying that they would seem insignificant to the foe and thus not draw their attention).

Grand Admiral Galdabash himself was present at the hill-fort, having returned from the interior partly to ensure his river mouth defences were still intact and partly upon some dark business that only he knew. Now that the Tabrizian fleet had arrived he was glad he was present, so that he could command his forces to fight rather more intelligently than they otherwise would have done. His shattered mind, however, was still unstable, and he knew that there might (as ever) be extended periods of the fight in which he barely knew what was happening himself. Not that he cared, being so filled with rage and hatred (and greed, always greed) that any other thoughts faded into insignificance.

While his mind was in balance, he acted quickly and ordered his force for battle. His handgunners he emplaced in the stockade at the hill’s summit, there to provide something in the way of gunfire but more importantly to act as a last defence should anything get close to the stockade and Queen Bess. A little further down the slope he placed his two small cannons, or ‘carronades’, where they might fire over the heads of the rest of his force arrayed downhill. That lower battle line, included three massed bodies of regimented zombies behind the storm-poles, with two bloated corpses shambling in their rear. His three captains were amongst them, though a pair of them shared command of one of the regiments (one carrying the army battle standard) thus leaving the rightmost regiment of undead pirates without an officer of any kind. He himself stood to the left of the centre, leading his company of zombified Ogres; while out on the far left moved his large pack of scurvy dogs, ready to be unleashed upon his command to move at speed against the foe.

The crews of the two carronades stood like statues, what remnants were left of their minds being entirely empty. Only the firing of their pieces could snap them out of their catatonic state, for then they would reload just as they had done in life so many times, going through the sequence of motions with barely any need for thought.

In the massed ranks and file of Zombies, however, there were at least the echoes of thought. Each individual could hardly be said to have had much ‘on their mind’ but as a body, they somehow became more than the sum of their parts, from which was born a brooding anger ready to spur them on to hack, slash and kill for their master.

Galdabash himself glanced to his left, then raised his huge curved blade in the air ready to signal his dogs. The two cannons paired upon the enemy’s right had caught his eye, and he now knew exactly what he wanted his dogs to do.

Claudio Sagrada, meanwhile, had no idea just how fast those dogs could run. If he had known he would surely not have stood there quite as pleased with himself, idly imagining that the two cannons he commanded were like a pair of monstrous pistols that he could wield as if he were a giant. He even had a smile on his face as he entertained himself with his musings! It was to be a short-lived smile. 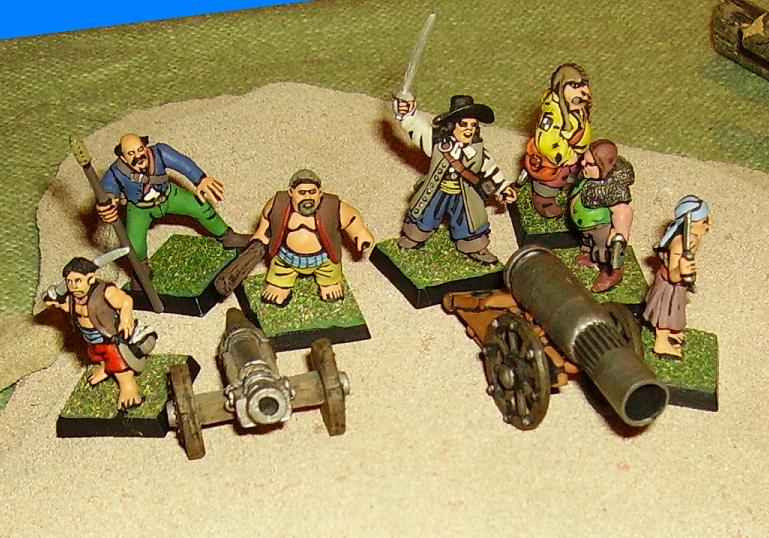