Game Note: The following game continues almost from the point the previous battle ended, but now the ogres have two 400 pts relief forces, one entering from the north side, the other from the south, as well as a few newly-bought maneaters bribed (using saved ‘Supply Points’ in the city’s coffers) to help on the defence of the city. This scenario came about due to the fact that the first assault was a technical draw (as per the campaign siege-assault rules) even though the attackers very obviously had the upper hand. Also, because the battle took place at the very end of the summer season, thus (again a technicality) the end of season phase kicked in and reinforcements could be created and ordered. What would be a simply some number-crunching in a board-game style campaign thus drove the creation of the above story-piece and the wargame below. Without the relief forces, the battle would have not been worth fighting, being a foregone conclusion. But with the extra forces performing a pincer attack we decided it was game on!

Part 1: Deployment and Turn One

The army of Karak Borgo waited four days for their master engineer to declare it was safe to recommence firing Granite Breaker. The engineer spent that time scrutinising every square inch of the enormous barrel – no easy thing considering its massive iron weight had to be lifted aloft by a hastily constructed hoist, to a height of just more than the width of a dwarf, allowing him to crawl beneath, there to inspect the underside. As was the dwarven way he was not to be rushed, taking his time to do the job thoroughly. Not one dwarf thought to complain, bar Glammerscale the wizard, who ought never be taken as an example of a typical dwarven attitude. The Brabanzon mercenaries, on the other hand, found the delay most frustrating – to them the city seemed ripe for the taking. They had to console themselves with the notion that once the massive gun continued its booming battery, the enemy would be so distracted and distressed that the mercenaries’ casualties during the assault should be much less than otherwise they might.

Meanwhile the bombardment was maintained by the mighty engine’s smaller counterparts: cannons, bolt throwers and the archaically fashioned stone thrower the Brabanzon had brought in pieces through the mountain pass, then pegged and lashed together with practised skill. Their combined efforts paled into insignificance compared to Granite Breaker’s earlier work, but it showed the enemy the besiegers were awake and able to hurl missiles perfectly capable of punching right through ogre flesh and bones, if not very effective against the stone walls.

The besiegers kept a constant, close eye upon the shattered walls and towers, expecting a sally would surely be launched against them, but it seemed the defenders had not the numbers for such. Either that, or they were awaiting some other development. In the meantime, despite the steady barrage of bolt and ball, the surviving ogres patrolled the walls with their own brass and iron pieces, with smouldering slow-match always to hand.

Some brutes, as if careless of whatever could be thrown at them, patrolled the mounds of rubble where the walls had tumbled. Others occasionally wandered outside the walls. Perhaps curiosity had got the better of them? Or they wanted to flaunt their contempt of the dwarves and men dispersed about the city?

Some of these even re-crossed the rubble to return inside, although several never came back, simply adding new, grey heaps to the already large mounds of tumbled stones.

When their hired Brabanzon scouts returned in the afternoon of the fourth day the army of Karak Borgo learned exactly why the ogres were biding their time. The riders reported the approach of two separate relief forces, from both the north and the south-east. An hour later, when the master engineer was finally satisfied (and not a moment sooner), the re-loading of Granite Breaker began and the ‘Great Thane’ of Dravaz, Lord Narhak, ordered the call to arms.

The army drew up in a rather different manner than last assault, for they knew the foe would come from up to three sides. The dwarfs formed a defensive arc afore their artillery pieces. The scouts had reported greater numbers approaching from the south-east, so Lord Narhak joined his warriors to form a barrier to that side, while his thunderers and longbeard veterans stood upon his flank, along the front of the line.

Beyond them, closer to the centre of the line, were the dwarven quarrellers, then the cannon and bolt throwers, with Granite Breaker behind (able to shoot over the rest). Upon the right of the line were the mercenary Bretonnians, the Brabanzon, their main regiment of foot-soldiers providing the more solid defence, while longbowmen and brigand archers formed close by to sting any who approached from that side. The Brabanzon horsemen, now reconstituted into one body, patrolled the front of the line (Game Note: Here having already made their vanguard move.) … 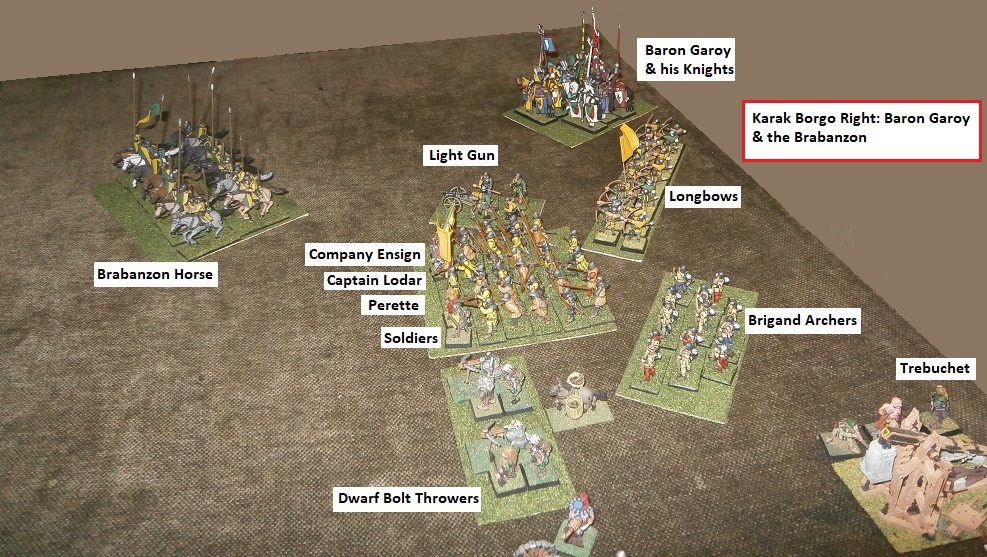 Baron Garoy and his youthful knights rode upon the far-right, hoping to be the first to engage any foe approaching from that flank. They had lost several of their number during the first assault merely attempting to cross the rubble of the breaches and were now hoping to engage the foe on the flat, for that would mean either glory through victory or defeat in combat, and not the ignominy of death due a fall.

The defenders clustered mainly behind the southern walls, before the dwarven line. The slaughtermaster Wurgrut joined the newly recruited maneaters behind one of the few stretches of wall that had yet to tumble, while one of the two surviving companies of leadbelchers awaited even further within for orders concerning where and when to move up. 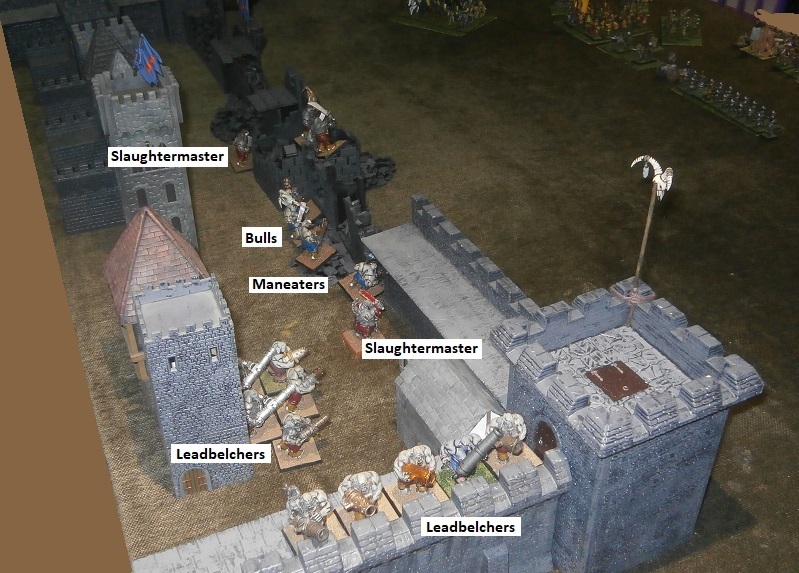 The other leadbelchers had mounted the southern wall, where, considering they could not even see the attackers, they too awaited orders. Wurgrut’s second in command skulked with the last of the bulls behind the ruinous gate.

Such were the dispositions as the second assault was to begin. 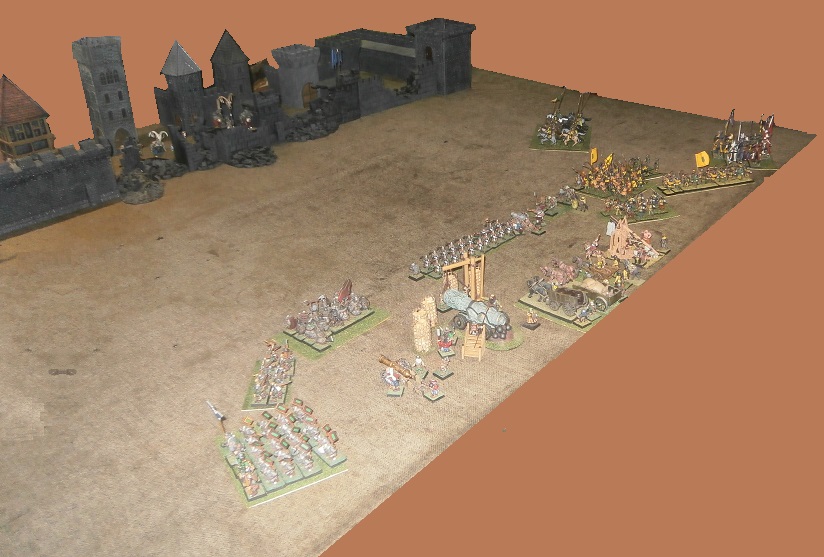 As Sergeant Huget led his riders towards the wall, to get a closer and therefore better look at what appeared to be a very weakly defended stretch …

… the ogres took the bold manoeuvre as a sign that battle was about to commence. The leadbelchers on the southern wall …

… having ladders ready on the ramparts, descended outside the walls, and crept as best they could, whilst hefting their heavy metal burdens, towards the corner tower. 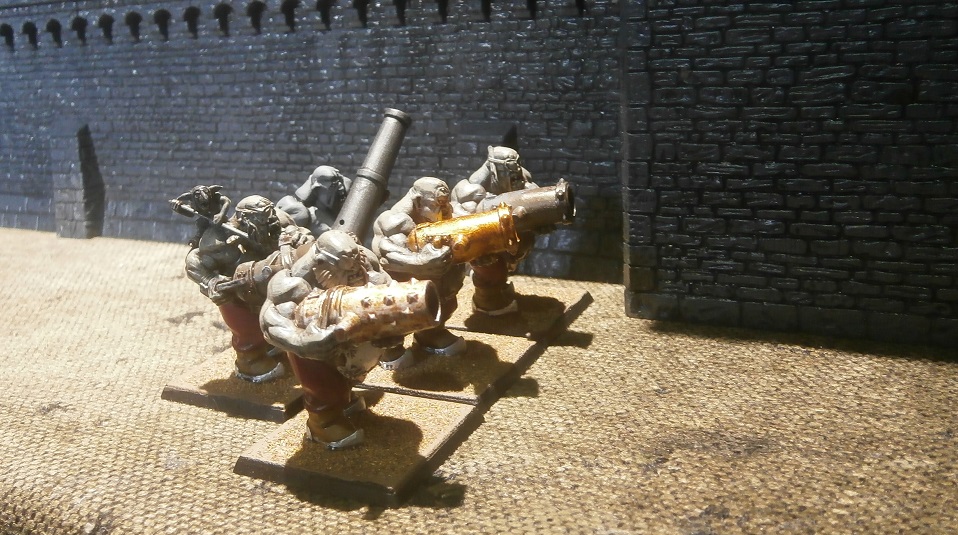 The remainder of the garrison merely shuffled and stretched to peek out through the ruins here and there. One of the maneaters, his ridiculously oversized head ornament (Game Note: Sorry Jamie, but even you have to admit it is a bizarre headdress/mask combination!) as well as the semi-collapsed ruins obscuring his view, had spotted the horsemen closing on the walls, but then quickly lost sight of them.

He shouted across to second slaughtermaster further along the wall, who responded by conjuring up the spell known as Braingobbler to work a fearful doubt into their minds. Sergeant Huget’s angry shouts, laced as they were with more than a hint of the panic the ogres’ enchantment had sent speckling through him also, failed either to reassure or cow his men, and the riders turned and fled. [i](Game Note: They failed the dispel roll and their re-rolled panic test – the Brabanzon army standard was within 12”)[/i] This initial discouragement, however, had little effect on the rest of the Brabanzon, for most simply assumed the riders had seen whatever they had seen, then chosen to fall back to a safer distance. When the horsemen did indeed rally and reform, this seemed only to confirm the mistaken assumption.

Amongst the riders it was the veteran Evrart who spoke first.

“That was magic, lads. Nasty and peculiar. But none of us is hurt, so let’s put it behind us. If that’s all they have, then it’s a good thing, not bad. Such as that shan’t cut or bruise us, nor break our bones, just give us bad dreams.”

He took a hearty gulp of the dwarven ale in his costrel, as did several others a moment later. Then the sergeant asked, “Ready?” and after a smattering of Ayes, they reformed their body.

The only regiment to move amongst the attackers were the Brabanzon longbowmen, looking to find themselves an opportunity to shoot. The dwarven crossbowmen already had their opportunity … 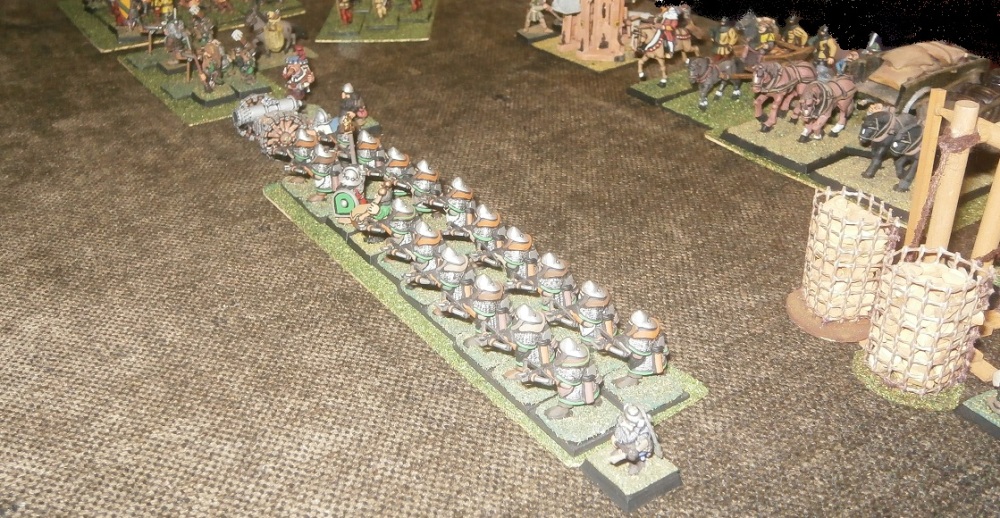 … and sent a storm of bolts at the Slaughtermaster. These clattered upon the stone all around him, and even struck his body, but some magical ward he possessed thwarted those few that otherwise might have cut into him. He grinned, revealing his maw of splintered teeth and bloody gums, and reached out to pluck a bolt from the mortar it had embedded itself in, thinking it might serve well as a toothpick. But then his eyes widened as he noticed the black shape of a roundshot skipping towards him. If he hadn’t already moved to grab the bolt, the ball would have hit him square on, instead it brushed his arm to leave a large, black bruise. (Game Note: This was technically a direct hit and he failed his ward, but then its D6 wound roll came up 1!)

Below Granite Breaker’s muzzle, one of the matrosses reached aloft to tip the wooden container holding the iron ball, and sent it rolling down to join the two already inside.

The crew did not bother to wad or ram the shots home (to do so would take another half an hour) but instead moved away from the front and cupped their hands over their ears, their thumbs splayed out at the back so as to relieve the pressure that was about to shudder its way through their heads. The chief gunner dipped his extra-long linstock so his mate could blow on the coals, then swung it up and over to lower the glowing end of the match down onto the trail of slightly slower-burning powder he had trailed behind the mound of more excitable powder directly upon the touch hole. This gave him just enough time to turn and all but throw himself down the steps of his platform.

The resultant boom was no more nor less loud than its previous efforts, and yet all those before and within the walls still found themselves shocked. The trio of balls missed the stone defences, travelling through one of breaches Granite Breaker had already made, and ploughed several hundred yards into the city, collapsing several houses and punching through many more walls.

Unfortunately, the great gun’s blast had come at a very inopportune moment for the trebuchet’s Brabanzon crew. Two had been winding tension into the tautly coiled rope, another was nursing the catch to hold the winder in place as the rods were removed and replaced to tighten some more, and a fourth, now that the basket was low enough to do so, had begun adding rocks. Who flinched, or slipped, or let go, no-one knows, but the resultant premature release wrecked the machine, killed two crewmen and wounded a third. (Game Note: You have probably guessed – catastrophic misfire.)