The dwarven Longbeards, commanded by the Runesmith Rakric Bronzeborn, had already begun to move towards the city wall …

… when the ogre relief force from Sermide arrived upon the field, consisting of a company of bulls and a mob of gnoblars. (Game Note: Both relief forces rolled separately, 5+ to arrive on turn 2, 4+ on turn 3, and if still absent, an automatic arrival on turn 4)

Lord Narhak had expected them, and so he was ready. He, his warriors and his army standard bearer, the long-bearded veteran Thane Bragdebreg, had tarried as the longbeards moved away, and so now stood directly in the ogres’ way.

The leadbelchers inside the city, reassured by the fact that Granite Breaker had failed even to chip the defences (and happy to pretend they had not witnessed what its shot had done to the dwellings inside the walls) now ascended onto the parapet, there to be joined by the Slaughtermaster Wurgrut. To their left the Maneaters edged forwards through the rubble, all the better to snipe at the foe using their handgun-sized pistols, while the leadbelchers who had descended from the southern wall now moved out into the shadow of the corner tower.

Wurgrut, having spotted the arrival of the first relief force, now attempted to crush the bones of the dwarven thunderers close to the newcomers, but although his spell was cast, it did little more than make the enemy’s bones ache, while the energies that spilled from his over-hasty efforts hurt stung him and the leadbelchers at his side, and sloughed away what other energies the winds of magic could have provided for both him and his lieutenant. He cursed, partly at the pain of the injury he had received, partly at the frustration of fumbling his magical efforts, but mainly because cursing was his most common form of utterance.

Only momentarily distracted by their comrade’s wound, the leadbelchers on the wall with Wurgut blasted their barrels at the advancing Longbeards, cutting four down. Their success drew the maneaters’ and other leadbelchers’ interest, so that they too gave fire upon the same enemy regiment, but despite spewing great plumes of smoke, they failed to harm any more of the enemy. Rakric Bronzeborn took a puff upon his pipe, and uttered a single, entirely unnecessary, word: “Steady”. 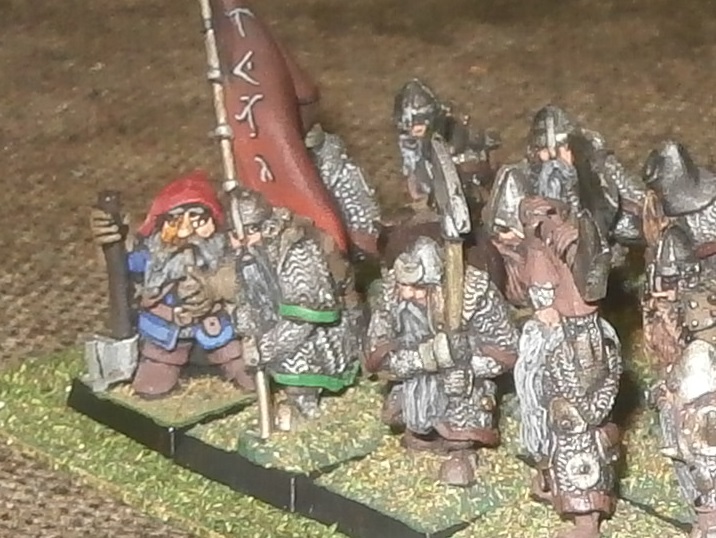 The ragged mob of gnoblars drew close enough to hurl a varied collection of sharp missiles at the dwarven handgunners, killing one. While they whooped and squealed, the dwarves calmly continued making their pieces ready.

Lord Narhak now ordered his warriors to ‘march on’, towards the ogres. This was no charge, but rather an attempt to ensure that the bulls could not slip past the warriors while the gnoblars caused a distraction.

Slowly but surely, the dwarves moved so that the only way either gnoblars or ogres could get to the artillery pieces in the rear was to go through them. One amongst the warriors a drummer named Ringregur beat the steady call required for this manoeuvre whilst staring wide-eyed at the massive brutes ahead.

He had been recruited fresh for this campaign and had never seen battle before, apart from the occasional drunken brawl in the alehouses and halls he entertained in. He did not know it, but Lord Narhak had noticed his expression, recognising the trepidation it revealed. Even as the brute foe began their charge, Lord Narhak leaned towards the drummer and said, “Tough Audience.” Ringregur might have laughed had he had time to do so.

(Game note: I have to admit that as GM, note-taker and photographer, I thought the dwarfs were in a very bad situation. If the ogres got through they could sweep down the line destroying machine after machine before anyone else could get to grips with them, never mind actually stop them. The dwarven player, however, despite commanding an NPC force not his own, knew the capabilities of a dwarven unit with not one but two lords within it better than I, as well as what spells he planned to assist them, and he was confident. Time would tell.)

Glammerscale the wizard, standing between the quarrellers and the stone-filled gabions shielding Granite Breaker’s crew, could see what was happening on the left flank.

Having his most important books at hand, and tasselled bookmarks handily placed, he opened to a richly adorned page containing the bound spell Harmonic Convergence. With little more than a stroke and a word of command, he released the spell and so blessed the warriors for the fight ahead. Emboldened by this success, he turned to a much trickier page, for the spell there was described but not bound. He had studied this page deep into the night, and now read it aloud hoping to call down a comet from the heavens. For a moment he thought it had worked, but then he sensed the unlacing of the etheric winds by the enemy’s magicians, and the possibility was gone. He closed the book but, in hope, left the bookmark in its place.

While the thunderers arguably wasted good powder killing four gnoblars, one of the bolt-throwers injured a leadbelcher, while shots from the smaller cannons tore a bull in half and felled another leadbelcher. Granite breaker struck the last standing section of wall to visibly shake both it and the ogres upon it, which is why Wurgrut accompanied the leadbelchers off the wall to stand boldly upon the outside.

Now that the relief had begin to arrive, the ‘slaughtermaster-general’ did not intend to sit inside the walls as they were torn apart like the last time. Ahead of him, the other company of leadbelchers had already ventured some distance out …

… while to the other side the maneaters and bulls had also emerged from the ruinous walls.

As all these ogres came on, the relief force had already charged: the bulls smashed hard into the steel-clad dwarf warriors; beside them the gnoblars poured onto the much smaller body of dwarven thunderers, leaving five dead from the dwarves’ countershot. 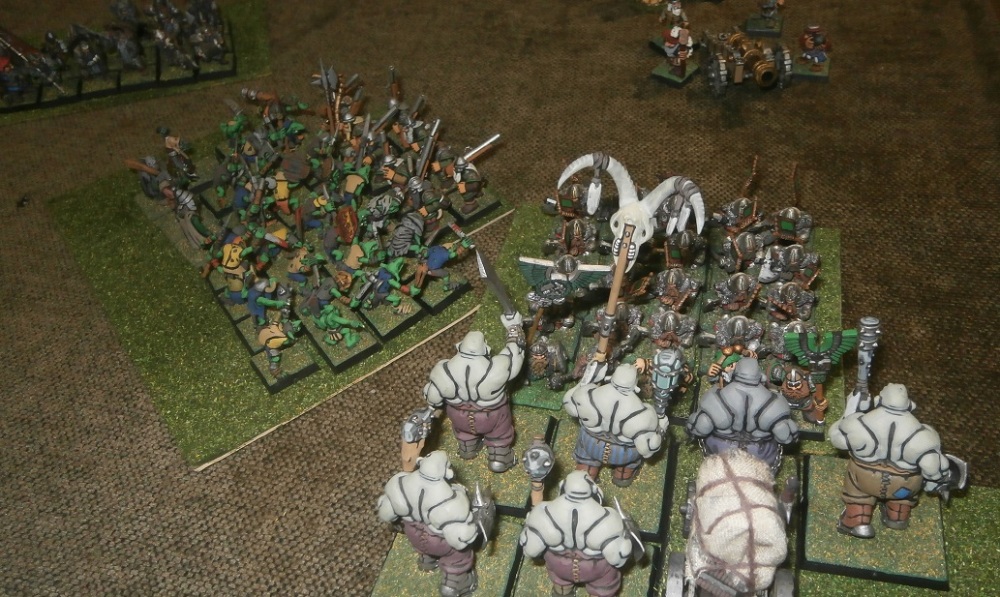 Neither Slaughtermaster could find it in themselves to summon sufficient magical energies to their bidding, and so it was left to the leadbelchers to fell another pair of longbeards. The combats were considerably messier than the shooting. Two dwarven warriors were fatally crushed by the mere impact of the bulls, then the ogres’ clubs broke the neck of another. Lord Narhak viciously bloodied the crusher in command of the bulls, causing him to reel away in pain, while Thane Bragdebreg and the other warriors also carved deep wounds. The bulls, more confused than fearful, found themselves unexpectedly halted. They would need to do a lot more to break through than they had bargained for.

The gnoblars failed even to scratch their tough-skinned, armoured foe, while the dwarves dispatched four of the greenskins. Perhaps because the bulls were still fighting at their side, and despite their usual cowardice, they too managed to fight on. [i](Game Note: Both units passed their Break tests.)[/i] This they immediately regretted, for the surviving longbeards now charged into their flank.

… the Brabanzon riders now spurred their mounts to carry them within bowshot distance of the bulls, coming very close to the ruinous walls to do so. 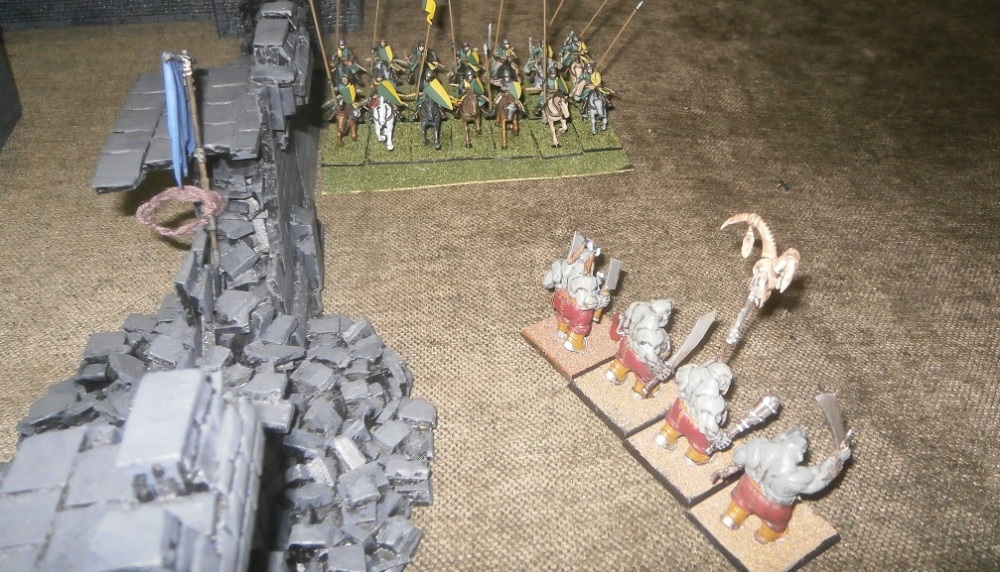 … and both remembered the fire magic she had employed to during the first assault. Keen to avoid such casualties during this last, desperate sally from the walls, both chose to ignore Glammerscale and concentrate on thwarting whatever magic she intended to summon. Thus it was that dwarf wizard managed once again to settle a harmonic convergence onto the dwarf warriors, magically blessing their blade-work.

(Game Note: I know, I know … ‘dwarf’ & ‘wizard’ are not two words ‘Middle-hammer’ players expect to see joined together, but the old model itself proves the concept is not entirely impossible. I had to come up with suitable rules for him. Of course, any dwarf army containing him does not get the ‘Natural Resistance’ dispel roll bonus, but this army would have lost this anyway by having the fallen damsel Perette on their side. He also struggles a little more than other with magic – each spell he attempts is +2 harder to cast than the standard casting value. Dwarfs are not natural wizards, so he has to try harder!)

Perette failed to conjure anything anyway, so the ogres’ caution was wasted. The attackers’ shooting, however, was quite impressive. One bolt killed a bull (Note: The player made his third snake-eyes panic test in a row here!), another tore deep into the chief slaughtermaster Wurgut. One of the cannons took down a maneater, while Granite Breaker felled another, and the dwarven crossbow killed a third! Even the Brabanzon riders stuck a few arrows into the enemy. All this damage left only one maneater, two bulls and the second Slaughtermaster in the centre of the field. 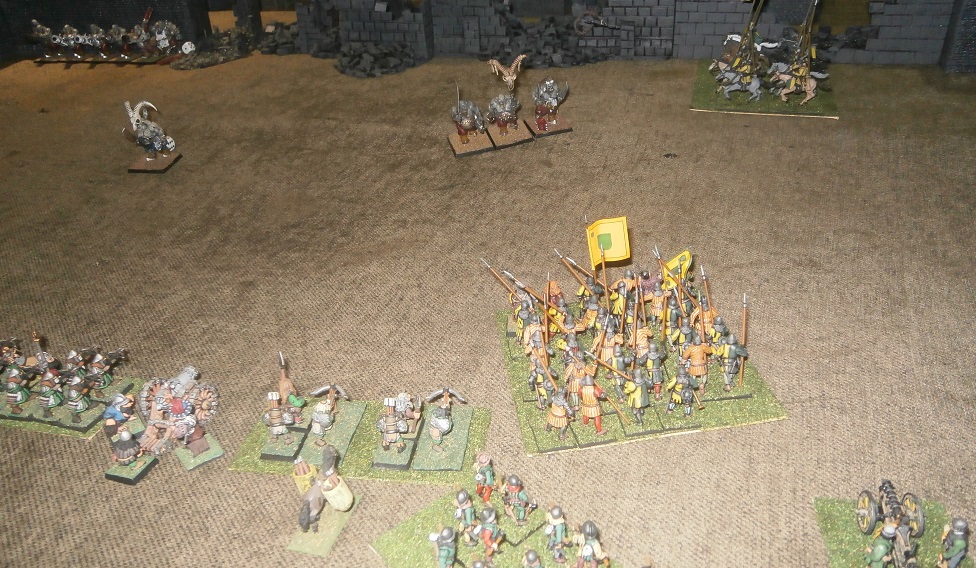 To the disappointment of its crew, the mercenaries’ light gun …

… merely buried its ball in the dirt.

The dwarves now hacked the gnoblars apart, and when the last few greenskins fled in terror, both dwarven regiments followed to finish them off and hit the bulls’ flank. 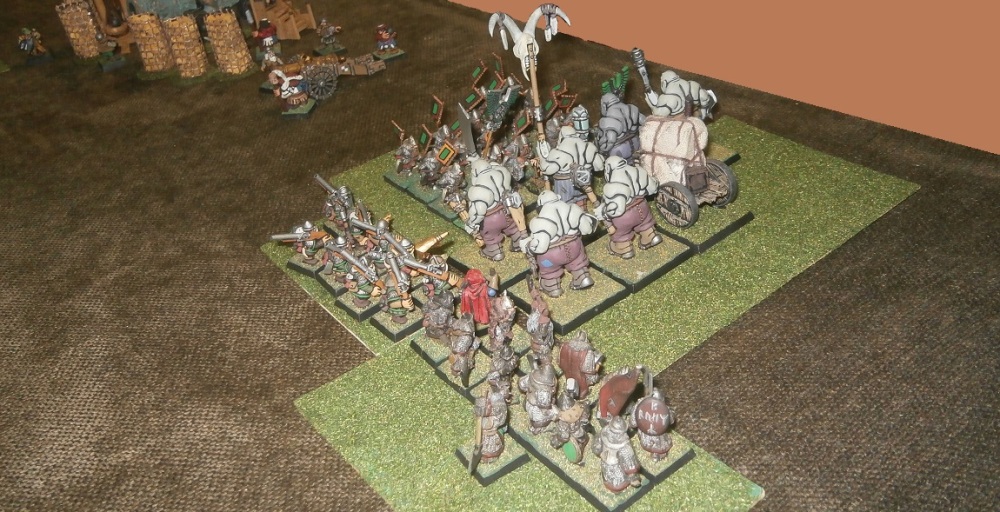 A bloodbath ensued, as Lord Narhak knocked the crusher’s brains out, Bragdebreg killed a bull by himself, and two more bulls were slain by the rest. Such was their prowess, luck and the skill of their shieldwall, that not one dwarf was harmed. The few surviving bulls knew full well to remain would be suicide, and so attempted to flee. They were pursued from the field by the Longbeards.