It was an hour after dawn when the enemy first appeared. Perette had been on the tower long before light, suspecting that such an enemy might prefer to attack when it was still dark. Then, as the sun rose, she had wondered whether they intended to attack that day at all. Perhaps they were waiting for something? Reinforcements? Mighty but slow-moving machines? Or perhaps they had some scheme afoot and there would be more to the day than a straightforward assault? Just as she was beginning to suspect that this must be the case, they suddenly marched into view.

There were a lot of them, as she had expected. Not only the reports from the scouts, but also every story she had ever heard of ratmen in battle, described them as having great numbers. Yet one of Garoy’s knightly companions, who had witnessed an army of their kind in his youth, had told her that if the scouts were right then this was a small army for their kind. Perhaps not what the ratmen themselves would even call an army?

The enemy force looked big enough to her! Directly ahead there was a large body of robed ratmen, hefting a broad ladder half as wide as the regiment itself – more like scaffolding than any ordinary ladder.

By their side were two smaller companies, whose own burdens were similarly oversized – handguns, but so long and heavy that two ratmen were need to heft them. She had heard of these. They were called jezzails, and they shot bullets of warpstone. Deadly, without a doubt, but surely not strong enough to penetrate the stone of the walls?

Turning she looked along the line. The majority of the enemy were gathered before the gate tower, not the tower she herself occupied, which showed a certain obvious clarity to their purpose. Yet … she could spy no engines of war among them with which to shatter the gate. How exactly did they think they would break through?

The robed rats were not the biggest body the foe possessed. Before the gate were two much larger regiments, carrying exactly similar ladders, as well as a swarm of almost natural rats and at least two companies of brutes the same height as ogres. The biggest regiment had one such brute in its front ranks, with a platform strapped to its shoulders upon which rode a warlord, general or some such, sporting a red and yellow banner affixed to his back. This surprised Perette, for she had always thought such creatures found their strength in numbers, and not through individual prowess. But of course, someone had to command: to cow the rest and make them obey. Doubtless whichever rat argued with that particular warlord would find themselves torn to pieces by his draft beast, while said warlord sniggered or scowled above!

And yet she sensed that the colourfully rigged ratman was not the commander of this force. She could not yet put her finger on it, but there was great power, magical power, elsewhere in the enemy lines. Whoever possessed it would no doubt reveal themselves the moment they brought it openly to bear, but for now, she just knew that the real leader was someone else.

Nearby there was a shout of ‘Have a care!’, which broke her dark reverie. She saw below that the humble townsfolk were leaving the wall there to make way for the Brabanzon longbowmen. This made her think of the wall to her right. What with the enemy so solidly massed before the gate tower, she now realised the brigand archers on that wall must have little to nothing they could shoot at, and so she strode over to the wall to shout down, “Care to join us up here boys?”

As the archers gathered their quivers of arrows and began moving along the wall, she strode back to where she had been before. They’re not slow, she thought. Even from this distance she could see they had drawn considerably closer in just the time it took for her to issue her command.

Seer-Lord Urlak Ashoscrochor peered at the city’s walls. He could see that the enemy had had little time to prepare their defences, for the ground between him and the walls was undisturbed – no pits, earthworks, stakes, nothing at all. But still, what with an oak and iron gate, portcullis and stone walls and towers, perhaps he should have tarried until his engines of war had been extracted from the tunnel? If the walls had to be taken by ladders, his warriors would die in droves. Not that he cared one jot for their lives, but to lose them carelessly when he had future plans for their use was not a prospect which pleased him. He recalled how once he had watched a warlord fill a moat with his fighting slave and even clanrats, simply to fashion a bridge to allow the rest of his force over. At least there is no ditch-moat here, he thought.

He moved his eyes along the battlements, squinting to make out what was upon them. The morning sky was bright, grating enough to blur his vision, but the enemy’s motion helped.

To his left he could see a fluttering banner or two, soldiers’ heads here and there, and a large machine upon the biggest of the towers. Then something caught his eye – a pitchfork! The kind of tool men-slaves used to gather hay from their weed-fields. Why would a soldier have a farming tool?

He looked instead at the walls before him, much closer. There was another machine of war, a cannon of sorts with many a muzzle. And, beside it, men armed with scythes. 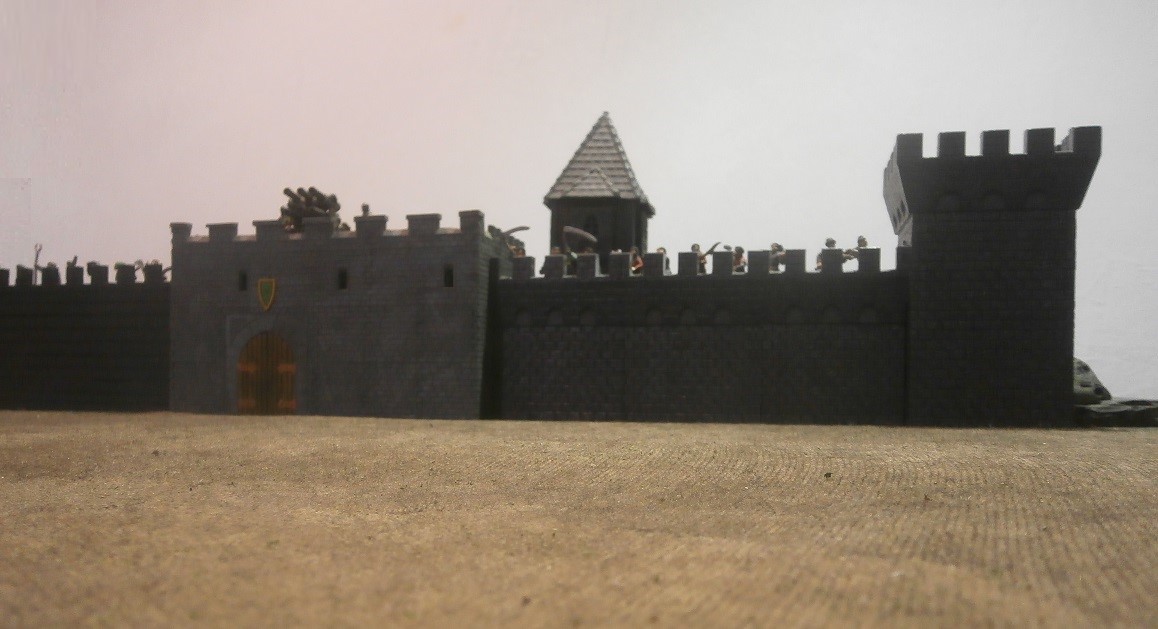 Ha! he laughed. They are but peasant-men! Where are the soldiers? These walls are manned by wretches. His scouts had reported soldiers in the garrison, armoured from head to foot. Either his scouts were wrong, the soldiers had fled, or they were elsewhere.

Then he saw motion on the wall to the right. There they are! he thought, as men armed with bows took the place of the previous, pathetic occupants.

It seemed a strange trick to play. It made little sense. What had the enemy to gain from such footling footwork, shifting hither and thither? Unless, the enemy had so few soldiers that they had had to hold them back until his army came into view, then deploy them on whichever walls were most threatened?

If that were so, then he could expect a similar exchange upon the wall ahead. He watched, waited. He squinted against the sharp light. But no, the wretched peasants there remained in place, their scythes held aloft.

They do not have enough soldiers to defend every wall! No armour, no shields; no handguns nor crossbows. Just rusty digging tools and the like. He licked his lips with glee. This would be easy after all.

Before he gave the order to advance, he glanced about him, to check if his army was in order. To his left he saw Clan Skravell’s red regiment, with Gurthrak atop his Bonebreaker at the fore. Just beyond he could make out Skravell’s ogres, and the dangerous end of their ratling team’s weapon.

Seer Lord Urlak hissed, which drew the attention of all around him, even Gurthrak. He bared his teeth at the warlord, narrowed his eyes. Gurthrak gestured forwards with the blade of his fauchard. It was a question. Urlak gave the tiniest of nods, and Gurthrak turned to look back at the city.

As he did so, he summoned up a screeching howl of a command: “Advance!”

The whole army began to move. 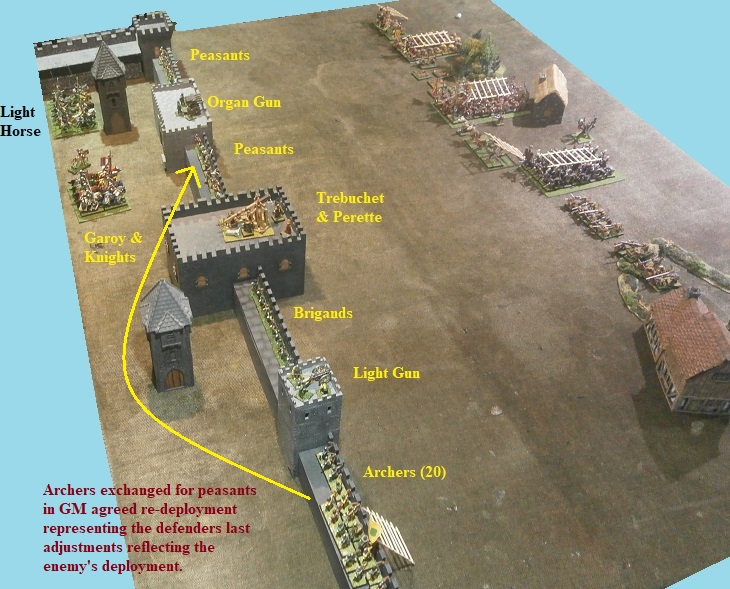 You may have noticed the swap-over of two units which I allowed to the defenders. That’s because both sides set up ‘blind’: the players giving me instructions for deployment without any knowledge concerning the enemy’s deployment. The only had a picture of the tabletop to go on. I had, however, told the defender he could swap whichever two units (or just move one) he liked, to represent the fact that his commander and troops would have a slightly better idea regarding the enemy’s deployment (having spied upon their approach) and so could adjust their own disposition on the walls a little to reflect that knowledge, within the present safety of their own walls.

BTW, I know the order to advance has been given by the Skaven in the story, and Perette has ordered the brigands to come up onto the tower, but in game terms this was simply deployment. Next part of the story will begin with Turn 1, Perette’s phase (the Bretonnians won first round).